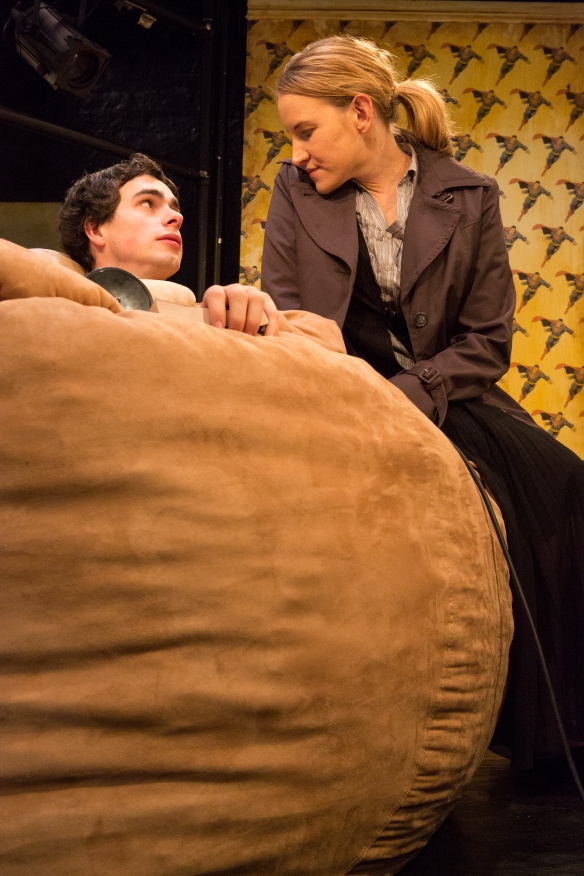 Arty (Blake Davis) is a sweet but morbidly obese teenager who dreams of being an explorer or a handsome movie star. In reality, he is marooned like a beached whale at home with his bogan mother JoJo (Gia Carides) who keeps him well fed as a result of her own personal issues.

In order to pay for life-saving gastric surgery, they agree to go on a reality TV show called Shocking Fat Stories where Arty’s struggle to lose enough weight to be able to undergo the operation is charted over 235 days.

And so into their home comes a ruthless, parasitic TV producer (Arka Das) and a stitched-up Pathways to Work CentreLink officer called Louise (Kate Mulvany) whose idea of a bright future for Arty is an office job and a tax file number.

With obesity on the rise and reality TV dominating the ratings, Melissa Bubnic’s black comedy Beached is a timely piece but it doesn’t get to grips with the issues it raises in any serious, in-depth way.

Though the play won the 2010 Patrick White Playwrights’ Award, it still needs work if it is to really hit home. As it is, the characters are one-dimensional and the plot superficial.

The script is full of gags (many of them cheap, some downright gross) but the satire isn’t sharp or clever enough to really shock so the play – particularly the reality TV aspect – comes across as a rather glib parody.

The co-dependent relationship between Arty and his mother could be fascinating but the reason given for JoJo’s compulsive feeding of her son is simplistic in the extreme.

Shannon Murphy directs an ambitious production for Griffin Theatre Company using cameras operated by the hard-working cast of four so that they are seen “live” and on screen.

Mulvany delivers a richly detailed and very funny performance as Louise: an uptight, daggy character whom she evokes with an array of nervous tics and lank hair. But it stretches believability that someone with so many insecurities and personal issues of their own would be employed in such a job – or that she would start a relationship with Arty.

Carides also gives a strong, layered performance as the loving but manipulative JoJo, doing all she can to make her real, while Davis exudes a lovely boyish innocence as Arty – though he is so sprightly and skinny it seems slightly odd for a character who supposedly tips the scales at 400 kg.

Of course, no-one is expecting naturalism here. Murphy and designer James Browne portray Arty as part of the brown, fleshy chair on which he sprawls, inserting Davis into it. It’s a nice idea but doesn’t look terribly effective in practice.

As for the TV producer, he is so crudely and predictably drawn that Das has little to work with but he brings a hard-edged energy to the role.

And so, despite the best efforts of the cast, Beached feels just that. Bubnic certainly raises some interesting, hefty (excuse the pun) ideas and the acting is enjoyable – particularly from Mulvany and Carides – but ultimately Beached feels lightweight.

Beached runs at the SBW Stables Theatre until August 31.

An edited version of this review ran in the Sunday Telegraph on August 4.