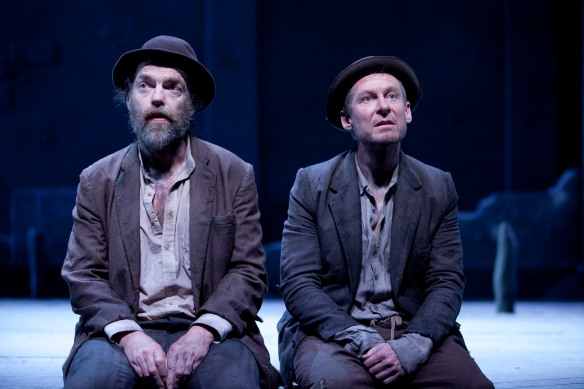 In a case of life imitating art, Richard Roxburgh and Hugo Weaving spent the first seven days of rehearsal not only waiting for Godot but waiting for Hungarian director Tamas Ascher.

As in Beckett’s play, he never appeared. Ascher couldn’t make the trip to Australia because of a back injury so Andrew Upton ended up directing the Sydney Theatre Company’s superb production, now playing, in which Roxburgh plays Estragon to Weaving’s Vladimir.

“For the first week it was ‘waiting for Tamas’ so the overlaps between rehearsals and the play (meant) there were all these hilarious moments,” says Roxburgh. “I wonder if it’s ever happened before, the director not turning up.”

It was while Ascher was directing Roxburgh and Weaving in STC’s acclaimed production of Uncle Vanya, which toured to the Lincoln Center Festival in New York, that the idea of doing Godot was born.

“We were rehearsing the scene between Astrov (Weaving) and Vanya (Roxburgh) when Vanya has disgraced himself with the pistol and he’s whinging about his life. It’s one of those unfortunately funny moments. We shared a cigarette as we sat there moping and Tamas just burst out laughing and said, ‘It’s Estragon and Vladimir,’” recalls Roxburgh.

“That’s where the whole idea came from so it was strange to do it without Tamas. I suppose for the first week we were (second-guessing what Ascher might have done). We know Tamas well enough and Anna Lengyel his translator was in the room. She’s a dramatist in her own right and incredibly intimate with his work and methods and style and modes of thinking. But then when it become clear that Tamas wasn’t coming, Andrew had to step up and make decisions so that became another part of the process.”

Roxburgh has never seen Beckett’s landmark, absurdist play but is thrilled to be performing in a production of it – particularly with Weaving.

“It’s obviously one of those plays that you know and I’d always hoped I would find the right environment to do it in and so when it cropped up it was perfect. Hugo and I have such a great chemistry and such great fun together,” he says. “There’s a reliability to that relationship that feels like it could be fleshed out in different ways.”

The two leading Australian actors have known each other a long time. “I essentially became an actor because of seeing Hugo,” says Roxburgh.

“I saw him play Toby Belch in his third year touring production of Twelfth Night when he was at NIDA. It toured to Canberra where I was at university and seeing what he did in that (inspired me). I can remember the production. There were some really fine actors in his year but his Toby Belch was just this landmark of a thing. It was so full of the joy of performance and not without subtlety that I just thought, ‘God, whatever that is I would love to have a piece of that in my life.’

“That really stuck with me. I think the first time we worked together was when I ended up casting him as Warburton, the homeless priest character in a production of That Eye, the Sky that I did in the Sydney Festival years ago. Then we cast him in the first episode of (ABC-TV series) Rake. Then we did Vanya, so we’ve always been in touch.”

Roxburgh says that during Godot rehearsals it wasn’t the play’s bleakness or abstraction that he found tricky but the way Beckett is “dealing with an entirely invented world in a way that doesn’t conform to the ordinary rules of society. Conversation, emotional logic, all of those thing that we kind of adhere to and that you operate within in a normal play aren’t there or if they are they are interspersed so it’s like you get refracted elements of those things throughout. That’s really a bitch to get hold of. It doesn’t conform to the usual rules. There’s no kind of essential narrative logic or emotional logic running through it so getting it into your head is hard. People always say ‘how do actors learn lines?’ Normally you think ‘that’s nonsensical, that’s just what we do’ but in this case it was so hard.”

Although the play is bleak and steeped in what Roxburgh describes as “a kind of apocalyptic sadness”, it is also very funny, with the STC production finding a great deal of humour.

“(Beckett) was pulling a lot from the energy and the dynamism of vaudeville, from the Marx Brothers and Buster Keaton. All of that energy is in the play as well,” says Roxburgh. “I’m sure there have been incredibly bleak, depressing versions of this play but that’s not the version we are doing.”

Next year, Roxburgh plays Cyrano de Bergerac for the STC (November 11 – December 20); something he suggested to the company.

“It’s a beautiful story that I absolutely love. I’ve always wanted to do it so I talked to them about it,” he says. “I thought Jeremy Sims did a really beautiful Cyrano here (at STC in 1999 directed by Marion Potts) as a kind of chamber piece, which I couldn’t have imagined prior to seeing it but I thought it was really great. But we are going to do a large-scale thing, which I think is great for the gallantry and the fun and the majesty of it.”

Meanwhile, Roxburgh returns to our television screens in February as Cleaver Greene, the brilliant but incorrigible, womanising, self-destructive criminal barrister in the third series of Rake – the award-winning ABC comedy-drama series, which he co-created, produces and stars in.

A US remake starring Greg Kinnear as the barrister, now called Keegan Deane, and Miranda Otto as his ex-wife will begin screening in January.

Roxburgh says that he wasn’t interested in playing the role in the US. “There would have been a great reason to do it financially but I suppose I felt that I have done my Cleaver and if I did one that I had to compromise on or that I didn’t feel I had as much creative control over, I would have hated it. And so in the end we thought it was much safer to say that we get somebody fantastic in America to do it – and I think Greg Kinnear is fantastic. I can’t think of anyone better to do Cleaver over there.”

Asked why the character has been renamed, Roxburgh grins. “That was at my insistence. I just thought, ‘he can’t have Cleaver’. Cleaver is named after the mayor of the town I grew up in – Cleaver Bunton, who was the mayor of Albury. There’s something about that that’s terribly personal and that was part of the fun of the original imagining of the thing.”

Filming for Rake in Australia wrapped just a couple of weeks before rehearsals for Godot began. Roxburgh admits he would have liked to have had a break after “the intensity” of Rake. “But luckily my character in Godot has to look hideous and aged and exhausted and spent so it’s perfect!” he quips.

“But I do need to have time off (after Godot) to get my batteries back in order. It was very hard this year (shooting Rake). We didn’t have (co-creator/writer) Peter Duncan. He and Andrew Knight wrote the scripts but Peter was working on the American one so he was over there. So on a day-to-day basis the ten phone calls I would have had with him in the previous series saying, ‘rewrite this, this doesn’t work, I can’t say that, this doesn’t make sense’ couldn’t be had so we had to find a way of getting through that this time, which made it exponentially more tricky. Thank god for (director) Jessica Hobbs who was really extraordinary and stepped up to do a lot of that work.

“But it was tricky because we knew where the bar had to be and we knew we couldn’t do something sub-optimal. And you know when it’s right. You can feel it, you can hear it, so when it wasn’t you just couldn’t let that go. It actually made this season so much harder but I think it’s worked. I think it’s paid off and it’s absolutely beautiful this season.”

Roxburgh confirms that the forthcoming Australian series will be the last.

“I do think you could continue to take Cleaver on all kinds of magical mystery tours,” he says. “I feel like he’s this character you could put in a jungle in Borneo and see what would happen and there would be fun to be had with that. But we were always determined to leave it with grace and dignity and leave people wanting more rather than less. It got to a point where we were having to massage story lines because they were too similar to ones we had already done.

“And also I suppose I want to see what else I’ve got,” says Roxburgh. “Having said that, I’m going to miss Cleaver terribly because I absolutely love that character. There’s so much of my clown in Cleaver and I will miss him.”