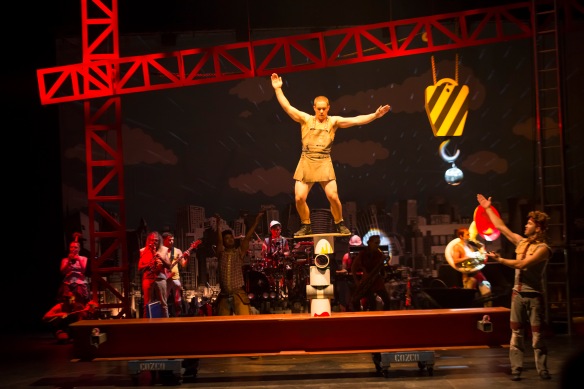 Celebrating its 35th anniversary, Circus Oz is a cherished part of Australia’s cultural landscape, known for its genial irreverence as well as its community and social justice projects.

The cast of its latest show Cranked Up includes two indigenous performers –Mark Sheppard as the cowboy MC and acrobat Dale Woodbridge – who went through its BLAKflip pathway program, for example: a terrific initiative.

As for the show itself, Cranked Up is fun but patchy. Inspired by 1930s black and white photos of a construction site, it has an industrial aesthetic, with a large steel girder used in various acts and props including a wheelbarrow and large tools. However, as a theme it isn’t developed as much as it could be dramatically.

A lot of the old faithful acts are there – seven balancing on a bicycle, teeterboard, juggling – and some of them could do with a surprising new twist. Not many have you gasping. It may have been opening night nerves but there were also quite a few drops and spills, while some of the dialogue was lost in the melée. Still, there is much to enjoy.

Highlights include Mason West’s one-arm balance on top of a swaying pole, sticking out of a piano – one of the few acts, which has you hardly daring to look. He also does a great rola bola, balancing on five wobbling cylinders. Bec Matthews drumming in a kind of swinging, drum-kit wrecking ball as acrobats tumble beneath is also spectacular and different.

Woodbridge is very funny as a comic poseur with mullet and is a strong dancer and acrobat, while Jez Davies is exuberant as inept magician Magic Hammond. There’s some nifty foot juggling from Hazel Bock. The lithe Stevee Mills is literally flung around, as well as doing trapeze and tightrope. And how great to see strongwoman Spenser Inwood catching on the trapeze and balancing a bloke on her shoulders. As usual, the live band rocks, with several of the cast doubling as musicians. But for all the highlights there are also dull spots and the show feels a little overlong.

The rough-and-ready quality is one of Circus Oz’s trademark charms but despite the engaging energy of its individual performers, Cranked Up feels a bit too rough and ready at times and needs to be a fair bit slicker to match Circus Oz’s best shows. That said, it’s still a fun family outing with children all over the tent looking rapt.

Cranked Up runs in the Big Top at Tumbalong Park, Darling Harbour until January 27. Bookings: www.ticketmaster.com.au or 136 100