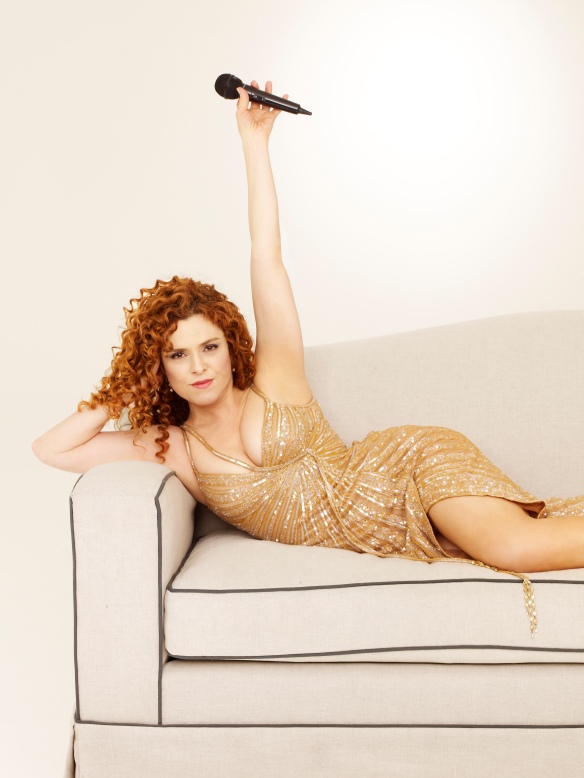 You might imagine that having originated the role of the Witch quite brilliantly in Stephen Sondheim’s musical Into the Woods on Broadway, Bernadette Peters might be at least just a teensy bit miffed that Meryl Streep has been cast in the 2014 film.

But if she is disappointed Peters isn’t showing it. “I didn’t ever think I was going to be cast,” she says.

“It’s a funny feeling. I actually feel proud that my role is being done by Meryl Streep. She’s great. I can’t wait to see what she does with it. If it’s not me, it might as well be one of the best actresses there are.”

One of Broadway’s brightest stars, it’s hard to believe that Peters has just turned 66, so fabulous is she looking. In fact, she never seems to age. Her unmistakable voice at the end of the phone from New York also sounds as warm, youthful and excitable as ever.

“We have really good genes in our family,” she says. “We all look pretty good. I’m Italian (born in New York). I take good care to exercise and I eat really healthy.”

A performer since childhood, Peters’ credits range from musicals including Gypsy, Annie Get Your Gun, Song and Dance, and Sunday in the Park With George to TV shows like Smash, Will & Grace and Ugly Betty.

In 2011, she played the melancholic Sally in the Broadway revival of Sondheim’s Follies – her 15th show on the Great White Way. This followed A Little Night Music in 2010 in which she took over the role of Desiree from Catherine Zeta-Jones at Sondheim’s suggestion.

In recent years, she has also become a regular on the concert stage and tours Australia in April with her latest concert show. Such has been the demand for tickets that she has added a third performance in Sydney.

It’s her third trip Down Under. “The thing about Australia and why I love coming is they are the most wonderful audiences (and) the most appreciative. They are ready for it and I want to give them my all,” she says.

“I love concerts because I’m the boss. I get to choose what I want to sing. There’s no fourth wall (between me and the audience). I’m not one character (as in a musical), though I’m doing two songs from Follies – that’s the last show I did on Broadway – and those I’ll probably do in character.”

She will also sing “Send in the Clowns” from A Little Night Music – a song she has vowed in the past she would never perform in concert. Since appearing in the musical, however, she has changed her mind.

“I was in a revival of A Little Night Music and I thought, ‘I’m never going to sing that song again (elsewhere). It’s perfect where it is in the show. It’s written for it.’ And then I had to sing something special for Steve and I thought, ‘you know what, now that I have all this information about the song, I’ll do it,'” she says.

Happy with how it went, it will be one of several Sondheim numbers on her song list for Australia along with some Rodgers and Hammerstein.

“I guess it’s predominantly Broadway songs but there are all kinds,” she says. “I’ll also sing “When You Wish Upon a Star”, which is a beautiful song. I sing Peggy Lee’s “Fever” lying on the piano and I’m doing some Peter Allen.

“I loved him. We did a summer tour together (in 1989). He was so lovely and kind. You could see on stage what a giving performer he was and that’s what he was like in person.”

Peters has been performing for over 60 years now. “The thing about this job is it’s always changing,” she says. “Every time there is a new project or a new show it’s different and you keep learning and wanting to learn. How do I get to the reality of this character? How truthful can I make it? That’s what drives me: to keep learning and sharing.”

Asked about her career highlights she nominates Mama Rose, the mother of all stage mothers in Gypsy.

“That’s an amazing role. It’s like the King Lear of musical comedy for women. I love a great role where you can keep playing it night after night and get deeper and deeper into it and find out more and more. I’m very fortunate to have had (several) roles like that: Dot in Sunday in the Park With George, Annie Oakley in Annie Get Your Gun and Desiree in A Little Night Music. That’s a fabulous role.”

Sondheim, who wrote many of the shows dearest to her, has played a major part in her career and is now a friend.

He has said of Peters, “Bernadette is flawless as far as I’m concerned” – and the admiration is mutual.

“I thank him all the time for giving me things to sing about,” she says. “In my show I sing a lot of Sondheim because he writes about real things, interesting and important things. The sentiments in some of the songs (are something) I like to remind myself about: “No One Is Alone” and “Children Will Listen” (from Into the Woods), “With So Little To Be Sure Of” (from Anyone Can Whistle).

“The great thing is he’s there to ask him a question. It’s like having Shakespeare there and saying, ‘now what did you mean?’ It is a great gift.”