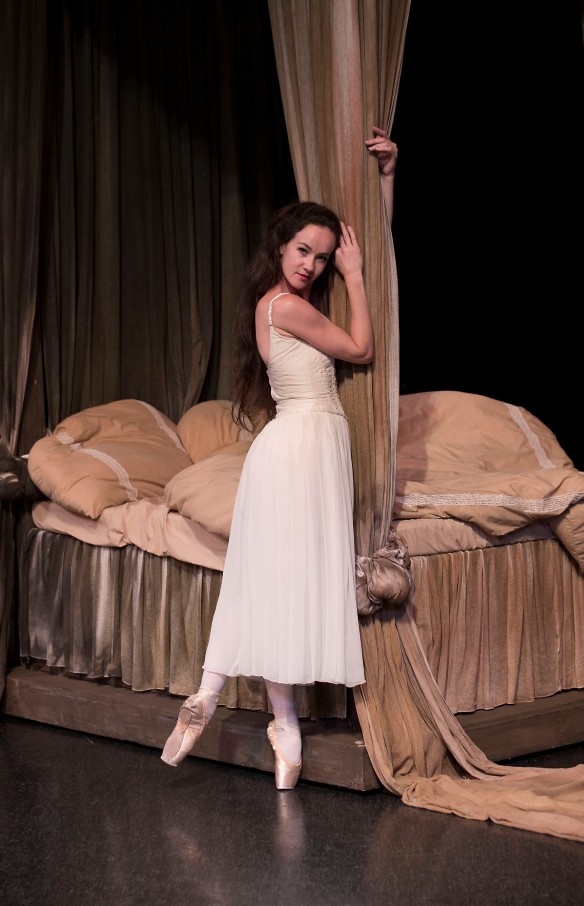 Lucinda Dunn in one of her Manon costumes. Photo: Lynette Wills

Lucinda Dunn was dancing the coveted role of Manon in Brisbane in February when she knew instinctively that the time had come to end her long, brilliant career with the Australian Ballet.

Last month, she announced that after 23 years with the company she will retire at the end of the current Sydney season of Manon, giving her farewell performance on April 23.

Dunn is the AB’s longest reigning ballerina having joined its ranks in 1991 at age 17. Promoted to the top tier of principal in 2002, she was awarded a Medal of the Order of Australia (OAM) in January for service to the performing arts through ballet.

She admits that the decision to retire wasn’t easy. “It was hard deciding when to go. It was always going to be difficult. The longer you leave it, the harder it is to leave. I haven’t made the decision lightly or without thought – I’ve been thinking about it for a while,” she says.

Making her long-awaited debut as the tragic Manon in Sir Kenneth MacMillan’s beloved, sumptuous ballet ­ – to rapturous reviews – clinched it for her.

“It’s such a fantastic role and ballet that it seemed a fitting way to end my career rather than with a contemporary ballet,” she says. “I was scheduled to dance later in the year but I decided to go while I still have a lot to offer on stage and to an audience.”

Although Dunn has had the odd injury of late, she has been dancing as beautifully as ever despite turning 40 in December.

“(I’ve spent) more than half my life in the company. It’s a part of me but the fact is that when you get older your body is not as resilient. I feel a little bit compromised so I didn’t want the audience seeing that and feeling that,” she says.

“Also, I have two beautiful girls (Claudia and Ava) aged five and two. They mean the world to me and I need to give them more time.”

Dunn is married to the AB’s associate artistic director Danilo Radojevic, who recently announced his own retirement from the company after 17 years. Meanwhile, Claudia and Ava, who have spent a fair amount of time at the AB studio, are already showing signs of wanting to follow in their parents’ footsteps.

“They both love it, coming to ‘mummy’s ballet class,’” says Dunn. “Claudia, my eldest, did her first ballet concert last year and Ava won’t take the tutu off which Claudia has passed down to her. They have been around the dancers and the studio quite a bit. It’s been fantastic that I have been able to have them here.

“I’m extremely lucky that I have been able to return to dancing, because you don’t know what pregnancy will do to your body. I’m so grateful that I was able to return twice and finish my career.”

For Dunn, who has always had a particular love of story ballets, Manon seemed the perfect role for her swansong.

Set in 18th century France, it tells of a beautiful, young woman who is torn between her love for a poor student called Des Grieux and the seductive lure of the wealthy lifestyle of a courtesan offered by the wealthy Monsieur GM. The tragic ending has her dying in Des Grieux’s arms in a Louisiana swamp.

Hard though it is to believe, Dunn hasn’t danced the role until now. “I’ve been in the ballet numerous times in other roles but in 2008 when they last did it I was pregnant with my first daughter so it has been something that I’ve wanted to do,” she says.

“I’ve known the complexity of the character and it’s such a beautiful ballet. At this point in my life I have the artistry to portray her and say farewell.”

She agrees that it is an emotional rollercoaster to perform. “You do have to get to the crux of the character. You can’t hold back. The audience can tell if you are faking it. The end is devastating. I’m drained by the end of it.”

At the beginning of next year, Dunn will become artistic director of the Tanya Pearson Classical Coaching College and the Sydney City Youth Ballet – a return to the Academy where she herself was a student as a teenager.

“Tanya Pearson was influential in my early career,” says Dunn. “My aim was to perform in musicals. My Mum performed in the West End as a singer, dancer and actor and on cruise ships and I thought that would be my path. But Tanya Pearson saw potential in me in the classical field. I entered (and won) the Prix de Lausanne when I was 15. That’s when things changed. As a result of the Prix de Lausanne I won a scholarship to the Royal Ballet School in London and then came back to the Australian Ballet.”

“I’m grateful to have that in front of me,” she says of the new job. “It’s going to be a mourning process, that realisation that I won’t have class everyday or be performing on stage but I will be able to transition to a new career.

“I hope I can pass on what I have learned to help get the most out of a dancer. I have done a bit of teaching and coaching at Tanya Pearson in the past so I have had some experience. I hope I can pass on things to them (to help them) in their early stages. There’s that thing of ‘if I only knew then what I know now.’ I’ll need to learn some new skills in the coming months to be an artistic director. But I’m looking forward to it.”

Manon plays at the Sydney Opera House until April 23. Bookings: sydneyoperahouse.com.au or 9250 7777