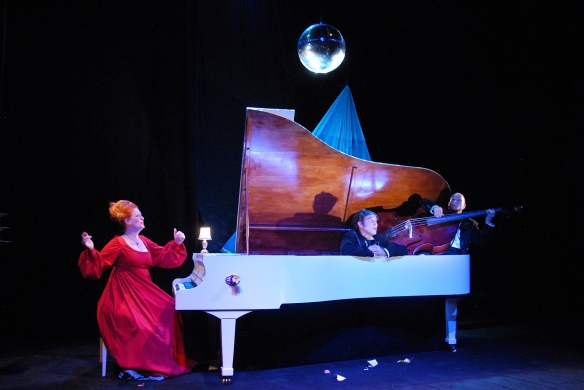 Miss Ivory Ticklefinger (Carolyn Connors) glides serenely onto the stage pulling her piano stool like a dog on a lead.

Dressed in a long red gown, with a pile of orange hair, she is the Queen of Sleep, renowned for her ability to draw children into dreamland. After warming up her voice and using a little magic to uncover her piano, unleash her mirror ball and turn on the lamp by her piano, she begins to sing a lullaby.

But today she is having no luck. The children in the audience just won’t go to sleep. And then the piano lid starts to move. Is there a bear in there? Then out hops Bass Boy (Dan Witton) followed not long after by Rhythm Boy (Renato Vacirca). Before long they have the maracas out and, well, sleep becomes ever more unlikely.

Still Awake Still! is inspired by the picture book and accompanying CD by Australian author Elizabeth Honey and composer Sue Johnson – though it is not an adaptation of it.

The first stage show produced by Jump Leads, Still Awake Still! premiered in Melbourne in 2011 and had a successful US tour earlier this year. It’s now touring through Australia, playing in Sydney this week as part of the Sydney Children’s Festival.

Directed by Jessica Wilson, who devised it with the collaborating artists, Still Awake Still! is a sweet, gently surreal show for children aged 4+ that celebrates music, creativity, playfulness and the power of the imagination.

The comedy routines involving the two men – who are reminiscent of the mayhem-inducing Thing 1 and Thing 2 in Dr Seuss’s Cat in the Hat, with a touch of the Marx Brothers – have a Chaplinesque feel.

The actors talk in gobbledygook but with enough recognisable words for it to be clear what they are saying, while the music ranges from Chopin and Beethoven to jazz and ragtime with all three performers playing the piano and Witton playing bass.

Admonished by a disembodied voice for failing to send the children to sleep, Miss Ticklefinger is given the sack. Realising that if she can’t beat them she might as well join them, she calls for Bass Boy and Rhythm Boy to return – and amazing things start to appear from the piano. 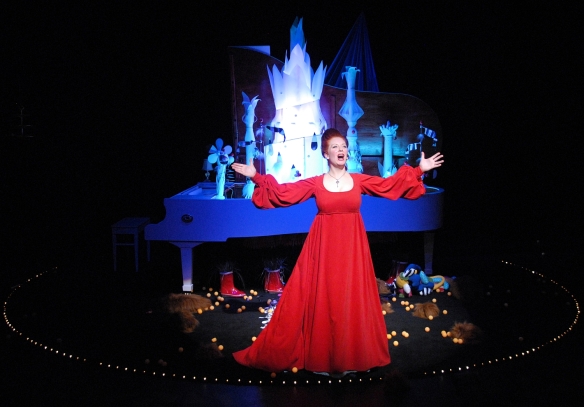 Encouraging the children to join her in “singing” ever more surprises from beneath its lid, the show ends in a spirit of play. And guess what? Well that would be telling.

The children in the audience particularly liked it when Miss Ticklefinger shone her torch at them and discovered they were still awake, as well as the most frenetic carry-on. But there was wonder too at the disgorging piano and consternation from the little boy behind me when the mirror ball plummeted. “What’s happened to the disco?” he asked. Sweet.

Still Awake Still! plays at the Seymour Centre until September 27 then plays several dates in Victoria. Bookings and information: http://www.stillawakestilltours.net