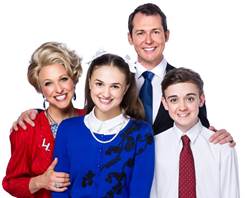 “It’s not a launch,” said David Campbell. “It’s just a release of information.”

Whatever it was, it was a great way to introduce the Hayes Theatre Co’s program for the first half of 2015 with performers on hand to sing numbers from the shows featured, and to give us a preview of the final shows for 2014.

British director Neil Rutherford introduced Beyond Desire, the new musical for which he has written book and lyrics, with music by Kieran Drury, which will play at the Hayes from November 21 to December 13.

Beyond Desire is an Edwardian murder mystery, inspired in part by E.M. Forster’s novel Maurice, which Rutherford described as “Downton Abbey meets Hamlet”. It will feature contemporary music inspired by the period, with influences of Elgar and Debussy. The score will be performed by a six-piece orchestra.

Nancye Hayes, who plays a housekeeper, sang an amusing number about family secrets, in costume complete with a tray of tea and sandwiches. It will be the first time Hayes has performed at the venue named after her. After that performance, I can’t wait.

The 2015 season begins in January with a production of the Pulitzer Prize-winning musical Next to Normal by Geelong’s Doorstep Arts (January 8 – February 1). Introduced by the company’s founding director Darylin Ramondo, the production will feature Natalie O’Donnell as Diana, the suburban mother with worsening bipolar disorder and delusional episodes.

The cast will also include Alex Rathgeber and Anthony Harkin. O’Donnell performed I Miss the Mountains in which Diana sings about missing the dizzy heights of her non-medicated state.

In May, Neil Gooding presents Dogfight with music and lyrics by Benj Pasek and Justin Paul, and book by Peter Duncan, all still in their 20s.

Based on the 1991 film starring River Phoenix, it tells the edgy story of three young men on their way to Vietnam who attend a “dogfight” the night before they leave at which they compete to bring the ugliest date, out of which emerges an unusual love story.

The show premiered off-Broadway to generally good reviews in 2012 and was staged at London’s Southwark Theatre in August to more mixed reviews.

Johanna Allen, who will play the prostitute Marcie, sang a number called Pretty Funny, performed in the show by the leading lady Rose. Dogfight runs May 1– 31. Gooding said that Pasek & Paul will hopefully come to Australia towards the end of the season and conduct some workshops and masterclasses.

Meanwhile, Miracle City by Max Lambert and the late Nick Enright plays at the Hayes from October 17 to November 16. The keenly anticipated revival of the musical, which had a brief work-in-progress season at Sydney Theatre Company in 1996, will be a brand new show directed by Darren Yap.

Described by Campbell as “a shitload of fun”, Miracle City is inspired by US televangelists Jimmy and Tammy Bakker. Telling the story of the Truswell family, it is set in real time during a live-to-air evangelical television show.

Blazey Best, Mike McLeish, Hilary Cole and Cameron Holmes who play the Truswell family performed the song Miracle City, a very funny, jaunty, gospel hoedown in which they sing about the Christian theme park they are building. The song was the first they wrote, said Lambert, but didn’t make it into the original show.

It was a spectacular way to end the evening and a fantastic teaser for Miracle City.

Sweet Charity, the Hayes’ inaugural, sellout production, which won three Helpmann Awards, will tour in 2015. A Canberra season has already been announced for February with other dates to be confirmed.

Details can be found at www.hayestheatre.com.au