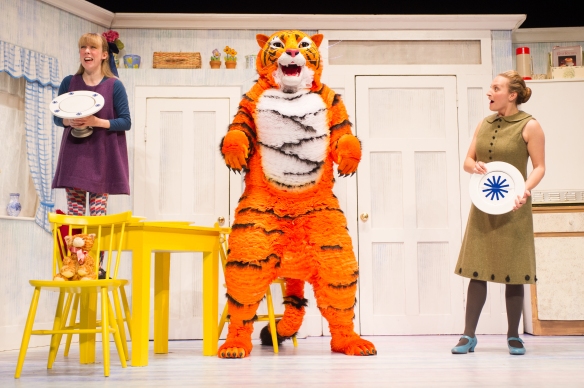 Abbey Norman as Sophie and Jenanne Redman as Mummy with the Tiger. Photo: supplied

David Wood’s stage adaptation of Judith Kerr’s much-loved picture book The Tiger Who Came to Tea is a fairly straightforward but enjoyable piece of children’s theatre (recommended for ages 3+).

It doesn’t have the wit or inventiveness of some of the best children’s theatre seen in Sydney over the past year – notably Monkey Baa Theatre Company’s Pete the Sheep and My Darling Patricia’s The Piper presented with Sydney Festival – but it has plenty of warmth and energy.

It tells the fairly simple story of a tiger who arrives just as young Sophie and her Mummy are sitting down for afternoon tea. While displaying exceptionally polite manners, the tiger devours every scrap of food in the house including “all the water in the tap”.

Wood has expanded the action with the addition of some songs and audience participation, including counting as the clock turns. Staged on a picture book-looking set, there’s also some cute magic used to have the food disappear as the tiger eats it.

Naturally it is the tiger – in a rather splendid orange, furry costume – that creates the most excitement, with shrieks of laughter at his pantomime-style entrance when only the audience can see him (“he’s behind you!”).

The children also enjoyed seeing Daddy getting tangled up in his jacket and putting a tea cosy on his head instead of a hat.

The British production, which arrives here after a West End season, runs for just under an hour. It does start to drag a little after the tiger has departed and the family goes out to eat at a café, particularly when a song about “yummy sausages” and “scrummy chips” is sung several times too often.

But overall, it’s a pleasant little show and the children around me seemed to have fun.

The Tiger Who Came to Tea plays at the Playhouse Theatre, Sydney Opera House until December 28 with morning and afternoon performances