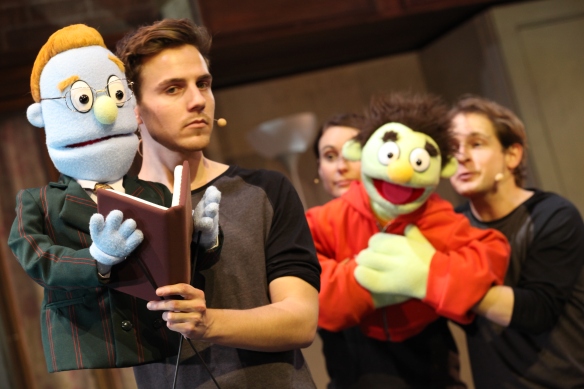 Avenue Q opened at Sydney’s Enmore Theatre with little fanfare in the mainstream media. Presented by first-time producer Luke Westley and his associate Natasha Sparrow for LCW, I admit I wasn’t sure what to expect. But it’s terrific – every bit as accomplished and enjoyable as the acclaimed commercial production seen in Sydney in 2009.

With book and lyrics by Robert Lopez and Jeff Marx, and book by Jeff Whitty, the musical premiered off-Broadway in March 2003, before moving to Broadway later that year where it won three Tony Awards including Best Musical.

It’s far from Easy Street as characters wrestle with unemployment, homelessness, heartbreak and their sexuality.

With a score full of perky tunes, a clever book and savvy, witty lyrics, Avenue Q zips along in thoroughly entertaining fashion while its celebration of friendship and its simple message – that, sure, life sometimes sucks but that’s OK – sends you home uplifted.

The musical features three human characters and 12 puppet characters, operated by clearly visible actors. Turner has gathered an excellent cast, all sing of whom sing strongly and get the balance between comedy and emotion, as well as flesh and fur, just right as they manipulate and interact with the puppets. (Props to puppetry and movement director Alice Osborne).

Madeleine Jones, who recently played the Girl in the musical Once, is lovely as the good-hearted, wistful Kate Monster and plays the predatory Lucy T Slut with plenty of vampish va va voom. Recent NIDA graduate Matthew Predny also exudes plenty of presence as the naïve, immature Princeton and the camp, sexually repressed Rod.

There are also strong performances from Shauntelle Benjamin as Gary Coleman, Julia Dray and Owen Little as the Bad Idea Bears, and Kimberley Hodgson and Riley Sutton in smaller roles.

Musical director Shannon Brown heads the seven-strong band, keeping things bouncing along nicely. All in all, a great little production, that charms in equal parts, fun and heart.

Avenue Q plays at the Enmore Theatre until July 18. Bookings: www.ticketek.com.au or 132 849