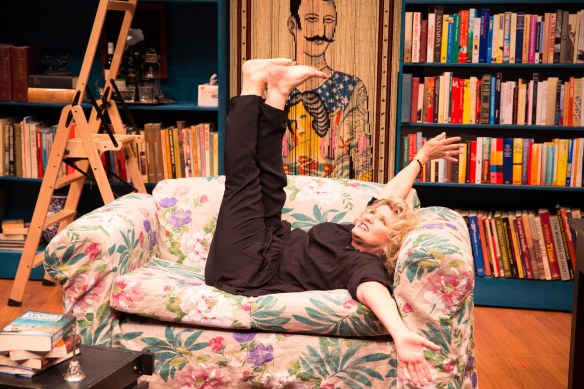 Amanda Muggleton is in her element in The Book Club, giving a big, warm, generous, comic performance that has the audiences in the palm of her hand and frequently in stitches.

The 1999 one-woman play by British-born New Zealand playwright Roger Hall was first adapted by Rodney Fisher for Muggleton in 2008. Fisher has updated it again for this season with more recent references to books including Christos Tsiolkas’s Barracuda and Geraldine Brooks’s March. He has also cut the script back so that it now runs 100 minutes without interval.

Muggleton plays Deborah, an upper-middle-class Sydney housewife with too much time on her hands. Her daughters have left home and she has little in common with her sports-obsessed lawyer husband Wally, currently training for a marathon.

Realising she’s bored, a friend invites her to join a book group. When it’s her turn to host, Deb invites local author Michael (quite how she manages it is never explained, but no matter) who spices her life up in a way she had previously only fantasised about with Martin Amis.

Narrating the show directly to the audience, Muggleton plays Deborah and all the women in the book club – kindly Welshwoman Millie, snobbish Eastern suburbs socialite Meredith, sweet pregnant Caroline, Swiss PR executive Steffi who never reads more than the first chapter, and so on. She also plays Wally and Michael, morphing easily between all the different characters and accents.

Muggleton gives an exuberant, joyous, energetic performance that has her literally bouncing around the stage at times. Her warm interactions with the audience are quick smart, picking up on any reaction. On opening night, an elderly gent fell asleep in the front row, which she seized on for some gentle ribbing.

Directed by Fisher, who also designed the set, The Book Club is a lightweight entertainment but given such a consummate, gorgeous performance by Muggleton it’s a complete delight. The opening audience loved her and leapt to their feet – an unusual accolade at the Ensemble. 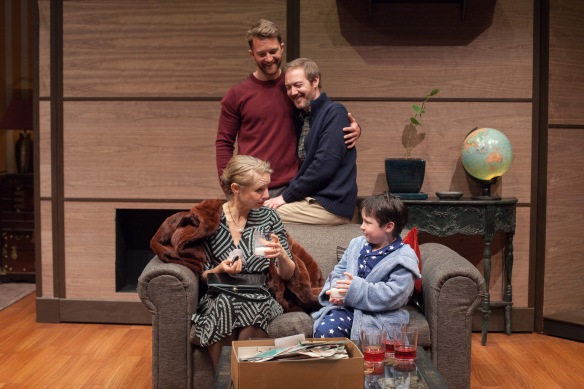 Terrence McNally’s 2014 Broadway play Mothers and Sons canvasses the losses and gains for America’s gay community since the AIDS epidemic including same-sex marriage and gay parenting.

The play begins with two people gazing rather awkwardly out of the window of a smart New York apartment: Cal (Jason Langley) and Katharine (Anne Tenney) who, it transpires is the mother of Andre, a promising actor and Cal’s former lover who died 19 years ago of AIDS.

Quite why Katharine has decided to make an appearance now is not clear, but she is one embittered woman. Having barely seen Andre after he came out, she has never been able to deal with his death and is still in denial about his sexuality informing Cal that: “Andre wasn’t gay when he came to New York. He came to New York to be an actor.”

Cal meanwhile has moved on. He is now married to the younger Will (Tim Draxl) who he met eight years after Andre died and they have a six-year old son Bud (Thomas Fisher/Connor Burke).

Mothers and Sons is one of those plays that feels a little too overtly like a staged debate, written so that the playwright can air issues close to his heart and needing discussion. Though beautifully played by Langley, Cal is too nice a character in some ways (it’s hard to believe he is a ruthless money-maker as he supposedly is, working in some vaguely defined financial role) so he never really lets rip but remains reasonable and polite in the face of Katharine’s homophobic remarks. As a result, the emotional stakes don’t feel high enough and there is little dramatic tension. This is compounded by the gentle pace of Sandra Bates’s production, much of which unfolds at the same level.

The device of having Will and Cal alternatively go off-stage to oversee Bud’s (very long) bath, also feels rather clunky.

Still, it’s a bold choice for the Ensemble and certainly tunes into issues that are very much in the zeitgeist at the moment, putting a human face to debates such as same-sex marriage.

Running 90-minutes, Mothers and Sons is well staged and well performed. It’s an enjoyable night of theatre, though it doesn’t have quite the emotional and dramatic impact that it might.

Mothers and Sons runs until September 27 and The Book Club runs until October 3, with performances at various times. Bookings: www.ensemble.com.au or 02 9929 0644