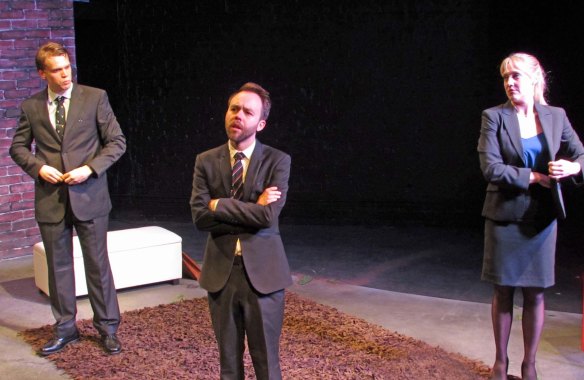 Bull, by British playwright Mike Bartlett, is considered a companion piece to his much-admired play Cock about a love triangle between two men and a woman, which also had a production at the Old Fitz earlier this year (see review on the blog).

Bull is a less subtle play. Running a tight 55-minutes, it is a savage black comedy about bullying, going straight for the jugular from the opening moments.

Set in a London office, three young employees – Isobel (Romy Bartz), Tony (Philippe Klaus) and Thomas (George Kemp) – are waiting for an interview with their boss (Craig Ashley), knowing that one of them is to lose their job due to cost cutting.

The steely, power-dressed Isobel and more laid-back but equally manipulative Tony are determined that it won’t be them, working together to ritually humiliate and undermine Thomas. It’s the law of the jungle and though Thomas tries to fight back, he’s no match for them. He’s one of life’s loner-losers no matter how much he tries not to be.

The verbal viciousness is breath-taking at times, the outcome mercilessly inevitable.

Directing the play for Ronaissance Production in association with Red Line Productions, Rowan Greaves has the actors go full-bore from the start. The play might perhaps have built tension had they played cat-and-mouse a little more initially, pretending some semblance of nicety before they go in for the kill. Instead, the play feels like a full-on assault. 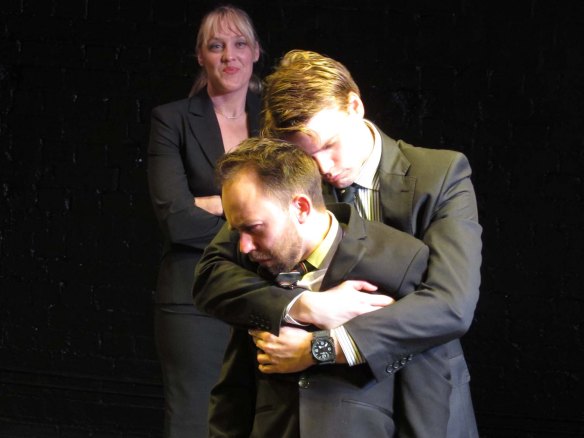 The actors are all terrific. Bartz is chillingly cold and utterly remorseless as the main aggressor Isobel, staring at Thomas with withering condescension. As the private school educated Tony, Klaus is the good cop to her bad cop, less obviously aggressive but just as ruthlessly nasty in a slightly more insidious way, performing with an arrogant insouciance.

Kemp is also excellent as the hapless, floundering Thomas, his body language reflecting his growing desperation, as he is gradually undone.

In London, the play was performed in a boxing ring. Here, given that it’s a late-night production, it is staged on the set of The Aliens – but really very little is needed in the way of props or staging with the focus on the verbal cut-and-thrust.

Bull is a short, sharp, brutal play and though it isn’t as fascinating or thought-provoking a drama as Cock it’s still packs a punch.

One of Britain’s leading contemporary playwrights, Bartlett won the 2015 Olivier Award for Best New Play for his epic drama King Charles III, which comes to Sydney next year as part of the Sydney Theatre Company’s 2016 season. And it’s the original Almeida Theatre production from London that we’ll see, arriving here direct from Broadway. In the interim, it’s worth catching Bull as a little taster of Bartlett’s considerable way with words.