At the start of Joshua Harmon’s Bad Jews, I thought it was going to be a big, broad, lightweight comedy in a sitcom vein, but it quickly turns ferocious, hooking you with its explosive passion and savage humour, underpinned by serious insights.

The viciously funny four-hander is set in a small but fabulously located apartment in Manhattan’s Upper West Side, which Jonah’s wealthy parents bought for him and his brother Liam.

Their cousin Diana – who now prefers to go by her Hebrew name of Daphna – is crashing on the floor, having attended the funeral of their beloved grandfather Poppy, a Holocaust survivor, the day before with Jonah.

Daphna is needling Jonah about all sorts – how wealthy his family is, whether he’ll visit her at college and, most importantly, whether she can have Poppy’s Chai, a gold talisman he kept safe during his two years in a concentration camp by hiding it under his tongue. As the most devout and only truly observant Jew among the three cousins, Daphna believes Poppy would want the Chai to go to her.

Then Liam arrives with his pretty but slightly vacuous gentile girlfriend Melody, having missed the funeral because he lost his iPhone while the two of them were skiing at Aspen. Liam, it quickly becomes clear, wants the Chai for himself for rather different reasons and has no intention of letting it go to Daphna.

The play pits the aggressive “uber Jew” Daphna against the secular, self-styled “bad Jew” Liam, with the non-combative Jonah looking on anxiously from the sidelines, keen to stay out of it, while Melody tries to keep the peace. Eventually the verbal stoush escalates into fisticuffs.

Amid the jaw-dropping hilarity, Harmon raises serious questions about Jewish identity and faith in today’s world as well as loss, grief and family.

Written in 2012, Bad Jews has had successful seasons on Broadway and in the West End. This production from Aleksandar Vass and Vass Theatre Group was a sell-out hit in Melbourne last year and now arrives in Sydney with the same terrific cast. 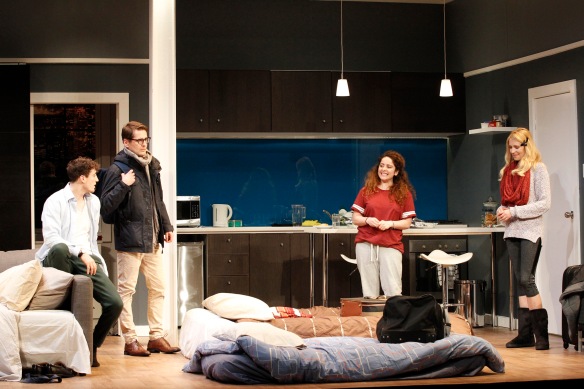 Staged on a detailed, naturalistic set by Jacob Battista, Gary Abrahams directs at a pace to match the play’s relentless, rampaging energy. Though the four characters are pretty stereotypical, the actors give exceptional performances with Maria Angelico as Daphna and Anna Burgess as Melody shining particularly brightly.

Angelico is a force of nature as Daphna, her bulldozing personality as outsized and uncontrollable as her mane of frizzy hair. Abrasive, bossy, exhaustingly verbose, sanctimonious and manipulative, using information gleaned from Melody to score points against Liam, she’s the kind of person many of us would avoid like the plague.

Angelico plays her to the hilt yet keeps her believable and against all the odds even manages to keep her vaguely likeable. Appalling though she is, you can’t help but admire the way she stands her ground so unapologetically, while the vulnerability she reveals at the end is subtly done.

Burgess also pitches her performance as the daffy but good-hearted Melody beautifully. The scene in which she tries to pour oil on troubled waters by singing Summertime from Porgy and Bess, drawing on everything she’s ever learned about vocal technique in opera classes is excruciatingly, hysterically funny and brilliantly observed. A little masterclass in itself.

Simon Corfield’s rather self-important, uptight Liam and Matt Whitty’s cringing, awkward Jonah are also finely judged. The Everest Theatre isn’t the ideal venue for a play that would be even more explosive in an intimate space but this is such a terrific production that it fires anyway.

Jewish audiences will doubtless find huge amounts to relate to, relish and ponder in Bad Jews but you don’t have to be Jewish to find it a thoroughly enjoyable, provocative evening. Recommended.