In February last year, the Hayes Theatre Co burst onto the Sydney musical theatre scene with a thrilling production of Sweet Charity directed by Dean Bryant and starring Verity Hunt-Ballard.

The ingeniously staged, dirtied-up, gritty take on the 1966 musical had audiences and critics raving (you will find my review on this blog) and three days after opening you couldn’t get a ticket for love nor money.

The show went on to win three Helpmanns for Bryant, Hunt-Ballard and choreographer Andrew Hallsworth and has nine nominations at the 2014 Sydney Theatre Awards to be presented tomorrow (January 19).

The announcement of a remount at the Sydney Opera House’s 400-seat Playhouse Theatre and then a tour to Canberra, Melbourne and Wollongong generated much excitement. But how would the production – created for the intimacy of the 110- seat Hayes Theatre – fare in a bigger venue?

Well, it has sashayed seamlessly into the Playhouse where it received a rapturous response at Friday’s opening night.

Inevitably you lose some of the intimacy but there are compensations. Hallsworth’s fabulous choreography (with nods to Fosse) has more room to sharpen and breathe for starters. And if anything, the performances seem more detailed than ever as most of the original performers revisit their roles.

The grungy staging is essentially the same: an inspired use of a couple of two-way mirrors, a few chairs, a costume rack and a red neon sign at the back saying, “Girls, Girls, Girls” (set design by Owen Phillips).

Tim Chappel has revamped some of the costumes adding extra colour and sparkle to various outfits including the witty, surreal costumes for The Frug, which gives the production a little more visual zing in the larger space.

Hunt-Ballard, who gave a sensational performance last time around as Charity Hope Valentine – the dance hall hostess with a heart of gold who keeps looking for love (and at one point an office job) as a passport to a better life – is more stunning than ever.

She radiates such warmth, such sweet, kooky naivety and such sunny optimism that her Charity is irresistibly endearing. Her comic timing is a knockout but always there is the knowledge that Charity uses ditzy humour to deal with her hurt and pain, as a way to bounce back, until that final, terrible let-down.

Hunt-Ballard inhabits the role completely. She sings superbly, dances well and her acting is sublime. But never do we feel that she is busting out a big song-and-dance number. Always the songs emerge organically from the character and the situation whether it’s the exuberant, show-stopping If My Friends Could See Me Now or Where Am I Going? which she delivers in heartbreaking fashion.

She is beyond divine in the role; it’s hard to imagine anyone playing Charity better.

Bryant brings this kind of truth to every aspect of the production. Character and emotion colour every song. Hey Big Spender erupts with the crowd-pleasing blast you expect but the girls look blank, emotionally shutdown, as they display their wares in the meat-market line-up. 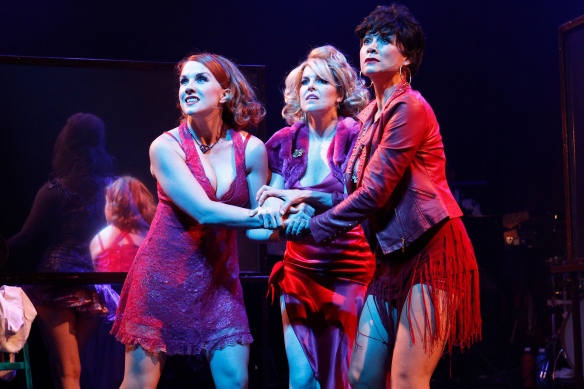 When Hunt-Ballard, Debora Krizak as Nickie and Kate Cole as Helene (two of the other girls from the seedy Fandango Ballroom where Charity works) sing There’s Gotta Be Something Better Than This it feels as exuberant as ever but tinged with palpable sadness: three feisty women, perilously close to being over the hill, knowing they will probably never escape this life.

Cole is new to the production and she is a great addition to the cast, bringing a real weight to the role of Helene.

Martin Crewes reprises the roles of Charlie, Vittorio Vidal and Oscar and again creates wonderfully delineated characters. His suave Vittorio is particularly strong and he sings Too Many Tomorrows with a lovely, classic Italianate tenor sound, then slides effortlessly into a nerdy, Jerry Lewis-tinged Oscar. In fact, his performance sits better in the larger space than in the tiny Hayes where it felt a tad outsized.

Krizak is once again a delight as the hard-boiled Nickie, nailing her fierce one-liners, and also as Ursula, Vittorio’s glamorous, jealous girlfriend.

As at the Hayes, the band – led by musical director Andrew Worboys on keys – sits along the back of the stage but it’s great to see them given more space and visibility. Worboys’ fantastic, funky, electronic orchestrations of the songs are again a winning, driving element of the production.

Bryant integrates the musicians into the production with Kuki Tipoki playing guitar as well as Big Daddy along with several ensemble roles, while Worboys plays Fandango owner Herman.

Original producers Luckiest Productions (Lisa Campbell, David Campbell and Richard Carroll) and Neil Gooding Productions are joined for the tour by Tinderbox Productions (Liza McLean). They should have a huge hit on their hands.

This is one of the most exciting musical theatre productions I’ve seen in a long time: a show given fresh life and raw, gritty currency by a superb creative team and cast. It has made the leap to the larger space in style. Don’t miss it.