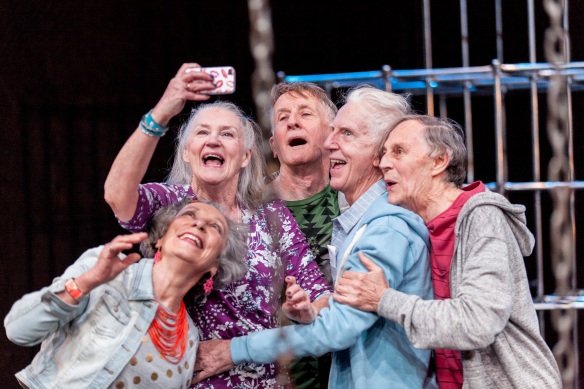 Sure, it could easily have been another song in the event but it’s quite a moment when the veteran cast of Seventeen dances to Taylor Swift’s Shake It Off. Famously, it nearly didn’t happen. When rights to the song were denied at the last minute, director Anne-Louise Sarks took to Twitter. The campaign went viral with Swift tweeting her permission, gifting the production invaluable publicity.

Written by Matthew Whittet, Seventeen is a very sweet play. On the last day of high school, a small group of friends gather in the park to party the night away before they all go their separate ways and life changes forever. As they drink too much, dance and play truth and dare, anxieties, fears and secrets bubble to the surface.

It could be performed by young people but Whittet wrote it for 70-year olds, adding another level of poignancy to his examination of those uncertain years on the cusp of adulthood when you ponder who you are and what you hope to become.

Joining them are the uninvited Ronny (Barry Otto), the weird, misfit kid that no-one likes, and Mike’s 14-year old sister Lizzy (played by the younger Genevieve Lemon) who won’t go home no matter how much they tell her to piss off.

The company spent time during rehearsals with some 17-year olds to get back in touch with a teenager’s energy, physicality and way of talking – and they all do a great job. Carroll and Gaden, in particular, climb the playground equipment and get their groove on with the ease and exuberance of people decades younger (movement by Scott Witt).

There are a few clunky moments as Whittet sends characters off stage to allow others to remain alone, which feel a bit engineered, but overall Sarks’ production is nicely staged on Robert Cousins’ playground set, with very clever costuming by Mel Page.

The performances are exceptional. After initial laughter at seeing septuagenarians larking around, saying “fucktard” and dancing to contemporary pop songs, we accept the convention as the actors draw us into the character’s emotional dilemmas.

There are lovely moments for all the characters, while Otto’s portrayal of the sad, alienated Ronny is heartbreaking.

The characters can’t believe how quickly their high school years have flown. Young people will doubtless relate to that, but Seventeen will probably speak loudest to people whose teenage years are long in the past and for whom the passing of time and sense of nostalgia will strike even more of a chord.

Whittet writes with love, tenderness and a gentle optimism. He doesn’t tell us what happens to the characters – which would arguably make for an even stronger play – but he leaves us hoping against hope that things will turn out well for all of them. 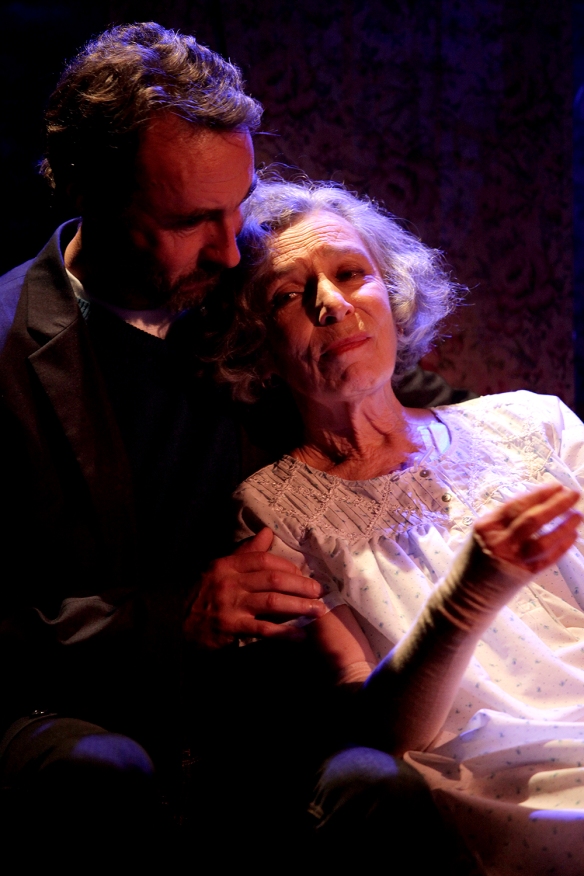 Campion Decent’s touching autobiographical play Unholy Ghosts “tells the story of my family and our navigation of loss” as he writes in his program notes.

Effectively putting his own parents on stage, it’s no wonder he creates such vivid characters in this heartfelt yet funny three-hander in which a man known only as Son (James Lugton) tells us about the loss of his warring mother and father to cancer within seven months of each other.

Hovering beneath this is the shadow of his sister, who died 12 years ago, whose loss he still keenly feels.

Decent has the Son act as both narrator and player as he guides us from scene to scene and the emotional roller-coaster that he finds himself on.

The product of a dysfunctional family, the Son is a playwright in his 40s who lives with his male partner and their two children.

His mother (Anna Volska) is a former star of stage and radio who gave up her career for her children and has resented it ever since but whose life is still one big, grand performance. Drily witty, she smokes and drinks ferociously despite cancer riddling her body and applies lipstick liberally – even for her last rites, which is both funny and sad.

His father (Robert Alexander) is a cantankerous old grouch who has little sympathy with his son’s sexuality (describing homosexuals as “your lot”) or career choice.

There’s no love lost between the divorced pair and their Son finds himself caught in the middle as he visits them both during their illness, keen to ask questions about his parents’ damaging treatment of him as a child.

Anyone who has ever experienced the loss of a parent or someone close will find aspects of the play to relate to. The mother’s description of her frail flesh literally coming apart at the seams hit home hard for me.

All three performers are excellent. Volska, who hasn’t been on stage for around a decade, brings precision timing and a compelling mix of diva-like manipulation and charm to the role of the mother. It’s wonderful to see her back in the theatre. 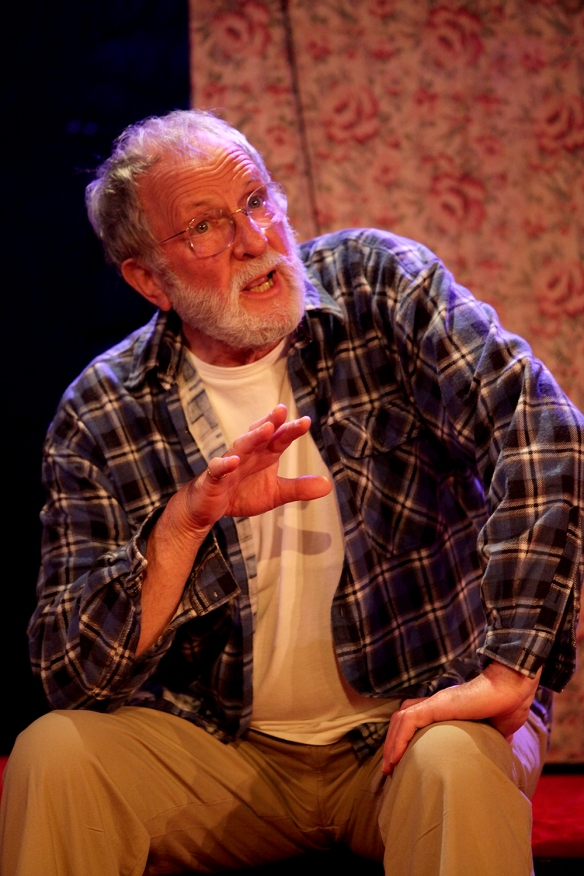 Alexander is very touching as the father who wants to express regret in his dying days but must struggle to find a way, while Lugton gives a winning, truthful performance as a man torn between love and frustration, irritation and hurt, relief and fear of coming adrift.

Produced by White Box Theatre as part of Griffin Independent, Kim Hardwick directs the production with a light, understated touch and a lack of sentimentality, even as recrimination slides into redemption.

Coming toward the end, a fantasy scene set in heaven therefore feels out of place. The final scene in which the Son realises with euphoria that the family he now has is the one he has chosen – partner, children and friends – also sits slightly oddly after what has gone before but sends the audience out on a warm, fuzzy note.

On opening night I felt that the play didn’t build quite as strongly emotionally as it doubtless will (navigating the jumps between narration and scenes perhaps?) – but others apparently sobbed.

Unholy Ghosts is a lovely, heartfelt play. Decent’s script has a zing about it with big laughs as well as tears. One sentence rang out, and has echoed in my mind ever since: “We all know our parents teach us how to live, or not to live, but, of course, I realise now they also teach us how to die.”

Unholy Ghosts is at the SBW Stables Theatre until September 20. Bookings: www.griffintheatre.com.au or 02 9361 3817