The Fantasticks is, rather remarkably, the world’s longest-running musical having played continuously off-Broadway for 42 years from 1960. On top of that, a 2006 revival is still running in New York. How much of its current appeal is to do with the caché of its lengthy run in the manner of The Mousetrap, who knows, but the musical clearly has to have something going for it.

The original London season and a 2010 West End revival didn’t do good business. Nonetheless, it’s still performed all over the world.

I have never seen it on stage but I have spoken to some who have, I’ve heard cast recordings and have read about it. It seems to me a curious choice in this day and age as the musical – a whimsically cutesy commedia dell’arte-style fable – is pretty twee and dated. Directing the show for Wooden Horse Productions in association with the Hayes Theatre Co, Helen Dallimore has taken out the commedia and given the darker elements in the show a stronger focus in order to try to make it resonate today. But in doing so, she has put the balance of the musical out of whack and lost some of the whimsical, homespun charm, which was clearly so much part of its original appeal.

Dallimore has also made a very strange – I would say ill-considered – decision to use the original version of a song about abduction, which includes the word “rape” around 40 times when an alternative version exists – more of which later.

With music by Harvey Schmidt and book and lyrics by Tom Jones (not the pop star), The Fantasticks tells a simple allegorical tale. Two single fathers living next door to each other pretend to feud. They build a wall between their houses and forbid their children (20-year old Matt and 16-year old Luisa) to see each other in the hope that reverse psychology will prevail and their offspring will fall in love and marry.

The fathers even set up a mock abduction, with Matt fighting off the supposed bandits to rescue his young love. The ruse works but the young lovers soon become bored with each other. Matt sets off like the prodigal son to see the world leaving Luisa behind to make her own discoveries. Eventually they are reunited having learned that in order to truly love and appreciate what you have, you have to have experienced some of the cruelties of the world. “Without a hurt the heart is hollow” as El Gallo, the enigmatic narrator figure who leads them on their journey to self-discovery, sings in the show’s most famous song Try to Remember.

The songs have tuneful melodies and poetic lyrics but few of them are especially memorable except Try to Remember and the romantic ballad Soon It’s Gonna Rain.

The score was originally performed by a sextet including harp and piano. Musical directors Glenn Moorhouse and Hayden Baltrop have rearranged it for electric guitar and electric keyboard to give it a rockier, grittier, more modern edge. It works for some of it but there’s no room in Dallimore’s darker, more menacing vision of El Gallo for Martin Crewes to sing the opening number Try to Remember in the usual crooning fashion. Instead, he sings it in a harsh, threatening manner, which doesn’t really suit his voice or the song. That’s no reflection on Crewes, who I thought was superb in the show.

Because Dallimore has taken a darker approach to El Gallo, but not pushed this further elsewhere in the musical, it makes for some awkward jumps in style. The two comic duets for the fathers feel really old-school in comparison. Meanwhile, the romantic ballads between the two young lovers, though well sung by newcomers Bobbie-Jean Henning and Jonathan Hickey, don’t quite soar as much as they might.

Then there’s the problematic “rape” song “It Depends on What You Pay”. The fathers enlist El Gallo to orchestrate the pretend abduction of Luisa. Though El Gallo makes clear that he is using the word “rape” in the classical context of “abduction”, it’s still a very loaded word and the original song in which El Gallo and the two fathers sing jauntily of “the Venetian Rape”, “the Gothic Rape”, “the Drunken Rape” and numerous other rapes now feels offensive, insensitive and very uncomfortable.

Aware of this, productions routinely replace the word “rape” with “abduction” or “raid” and in 1990 Schmidt and Jones wrote an alternative song called “Abductions”– so why Dallimore chose to go with the original is bemusing. 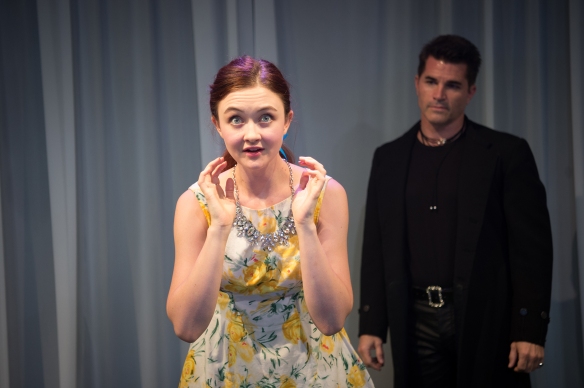 For all that, there are things to enjoy in the production. Crewes brings a dark menace and sexy charisma to the role of El Gallo but also manages to balance this with a sense of mystery and ineffable wisdom, suggesting a figure both devilish and god-like. A fine actor and singer, he is a strong presence throughout.

Garry Scale and Laurence Coy double as the fathers and two elderly travelling players (originally played by four actors) and both turn in strong comic performances. Scale’s portrayal of the doddery actor Henry is a particular delight. As the young lovers, Henning and Hickey sing attractively and exude a youthful innocence. But in making them a little more knowing and self-absorbed, they aren’t quite as endearingly naïve as they might be.

Hugh O’Connor’s set is simple but reasonably effective: a grassy lawn studded with flowers and white gauzy curtains through which we see a red Exit sign (presumably indicating the outside world, I’m not sure) though Christopher Page’s lighting does it no favours.

In the original, a mute actor played the wall. Dallimore has done away with this – and we are easily able to imagine it. But to then see the actors walking quite happily through the imaginary wall is a bit weird. There’s a terrific moment, however, with Moorhouse appearing from behind the gauze curtain to play guitar centrestage as the wall is rebuilt, which is a lovely touch.

The Hayes has become known as a venue where inventive productions have brought fresh life to well-known musicals and introduced audiences to lesser-known ones so there was much interest in how The Fantasticks would be reimagined for today. It’s great to see an emerging director like Dallimore prepared to take a risk with a show like this. Unfortunately, this time around the experiment hasn’t been that successful. This production never really finds its groove and it’s hard to see why the musical itself ever had such appeal.

The Fantasticks plays at the Hayes Theatre Co until January 31. Bookings: www.hayestheatre.com.au or 02 8065 7337