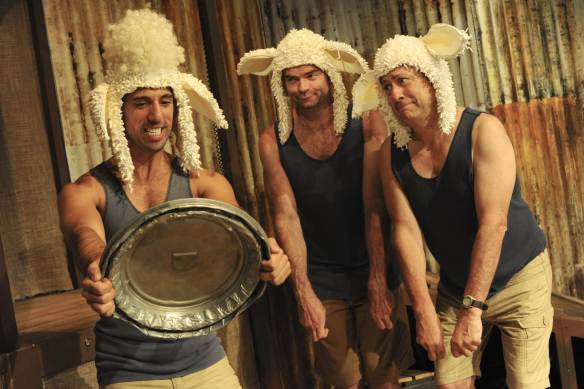 Based on the Australian picture book by Jackie French and Bruce Whatley, it tells a quirky story with a gentle message about difference, individualism and acceptance.

A new shearer called Shaun arrives in Shaggy Gully – but because he has a sheep-sheep called Pete rather than a sheepdog like everyone else, the other shearers send him packing.

However, Pete knows just how to treat a sheep and quickly wins the favour of the flock. When Shaun gives Pete a fancy new look, the other animals (sheep dogs included) are soon lining up to be styled so Shaun and Pete open a shearing salon, inviting the shearers to join them.

Writers Eva di Cesare, Tim McGarry and Sandra Eldridge have fleshed out the characters and added every pun imaginable, with plenty to amuse adults as well as the children, including the requisite poo joke. (You may never eat a Malteser in quite the same way again). The songs by Phillip Scott (who has written music and lyrics) are very catchy, with a nod to a range of styles from country to jazz, blues and a dash of Broadway.

Jonathan Biggins directs a lively, imaginative production on James Browne’s simple but highly effective set, which captures the feel of the picture book as it transforms from a corrugated iron shearing shed to Shaun’s salon, staged with a little extra sparkle for good measure, all beautifully lit lit by Matthew Marshall.

Dressed in shorts and singlets, the talented cast of four ­– Andrew James, Nat Jobe, Todd Keys and Jeff Teale – play sheep, sheepdogs and shearers morphing between roles with just a change of hat and a different physicality. They all sing, dance and act a treat and give very funny performances ­– though one bright spark in the opening audience wasn’t buying the fact that they were female sheep. “They’re not ladies!” he called out to general merriment.

Recommended for children aged four to nine, Pete the Sheep is a hugely entertaining show with heaps of humour and heart. So don’t be a dag, flock to it!

Pete the Sheep plays at the Lend Lease Darling Quarter Theatre until April 24 and then on tour. Bookings: http://www.monkeybaa.com.au or 02 8624 9340