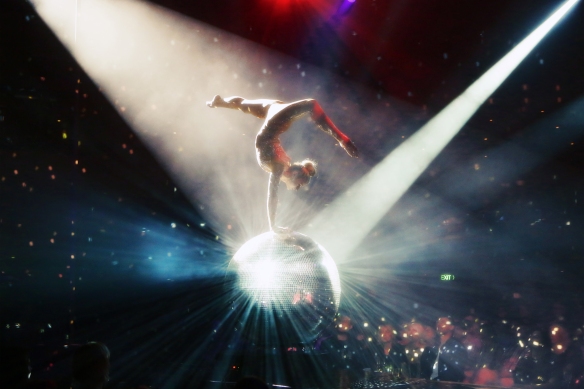 As you enter the Sydney Opera House Studio for Club Swizzle, the place is abuzz. People are sitting drinking at a large central, rather elegant bar (which serves pretty expensive drinks though there’s a cheaper bar at the back of the room), friendly waiters and ushers are whizzing around, and entertainer Murray Hill is moving through the crowd chatting.

Then in a snappy piece of choreography the bar is quickly transformed into a performance space, getting the show off to a terrific start.

The concept (by Brett Haylock) of a cabaret-vaudeville show set in a late-night bar is fabulous, as is the production’s set-up. The show itself feels a little undercooked but it’s early days and is bound to develop.

Club Swizzle has more of an old-fashioned vaudeville vibe than its cheekier predecessors La Clique and La Soirée.

Hill, a New York drag king, acts as the MC. His tagline is “the man who puts the ‘king’ back in f#*king funny”. I didn’t actually find him particularly funny but he’s a warm presence with a nice, easy rapport with the audience.

The backbone of the show though are The Swizzle Boys, four acrobats (Tom Flanagan, Joren Dawson, Daniel Catlow and Ben Lewis) who do the lion’s share of the performing.

Dressed as waiters, they certainly work hard for their money, performing numerous acts (balancing, Chinese pole, ropes, teeterboard, hoop diving) with oodles of exuberant enthusiasm, often with drinks in hand. The house band, Mikey and the Nightcaps, are also hot and add to the pumping vibe. 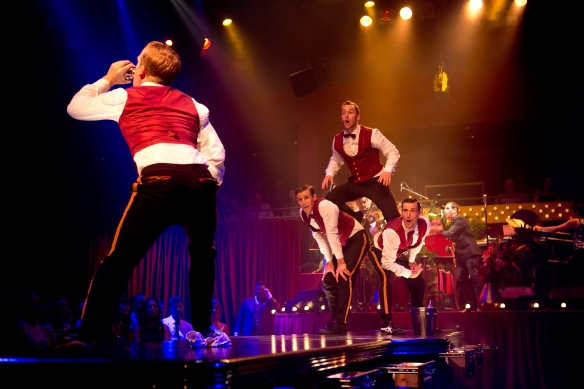 The Swizzle Boys prepare to launch off in Club Swizzle. Photo: Prudence Upton

Club Swizzle could do with a bit more variety – entertaining though they are, The Swizzle Boys are rather too ubiquitous – and a little more originality among some of the acts. There have been so many shows of this ilk (La Clique, La Soirée, Empire, Limbo to name just a few) in recent years that there’s little here we haven’t seen before.

I also missed the whacky, screamingly funny humour of acts like Captain Frodo squeezing himself through a tennis racquet or oddball comedy-magician Carl-Einar Hackner from La Clique/La Soirée.

It was an audience participation routine when two people are pulled from the crowd to do a pole dance-off that brought the house down on opening night, with Sunrise producer Michael Pell and The Voice contestant Lionel Cole hilariously giving it their all.

As Haylock has noted in interviews, a late-night bar is the natural, anarchic habitat for a various colourful characters. As it stands, a few more eccentric personalities and a bit more of a sense of chaos would give Club Swizzle more zing. But it’s still a lot of fun and got a huge response from the audience.

Club Swizzle plays at the Sydney Opera House until March 15