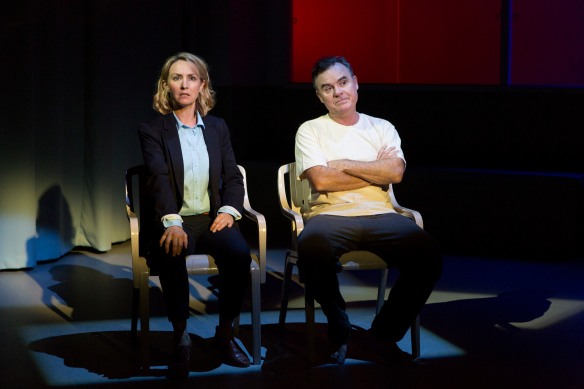 After the success of Sue Smith’s previous plays Kryptonite in 2014 and Strange Attractor in 2009, her latest drama Machu Picchu was keenly anticipated – particularly with Lisa McCune and Darren Gilshenan in the lead roles.

But despite the best efforts of McCune and Gilshenan, the play itself feels underdeveloped, while the production directed by Geordie Brookman does it no great favours.

In a program note, Smith reveals that she was diagnosed with non-Hodgkin lymphoma a month before Kryptonite went into rehearsals. Machu Picchu was written in response to that experience. The play isn’t about cancer but explores how you deal with a life-threatening or life-changing event, and how that might make you reassess and change attitudes and priorities.

Gabby (McCune) and Paul (Gilshenan) are both successful engineers and appear to live a charmed life, though after 20 years their marriage has gone off the boil. Then, on the way home from attending a disastrous mindfulness retreat, their car crashes into a kangaroo. Gabby escapes unharmed but Paul is left a quadriplegic. 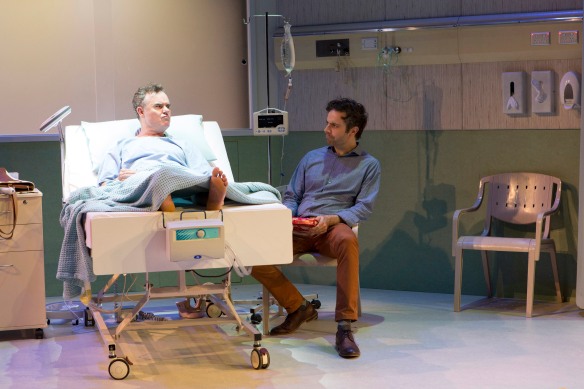 Machu Picchu takes its name from the Inca city: an engineering marvel both admire and have long planned to visit. It represents the missed opportunities and compromises so many of us make in the busy whirl of life today. With its extraordinarily strong foundations, which have ensured its survival, the ancient site is also a resonant image for relationships.

The play shifts back and forth in time, so that we see Gabby and Paul’s relationship before and after the accident. With Paul experiencing hallucinations from the medication, the play also moves between reality and more surreal scenes but this hasn’t been fine-tuned enough in the writing. Brookman’s direction does little to help and the shifts in tone and style feel somewhat clunky.

McCune and Gilshenan both turn in accomplished performances. McCune plumbs Gabby’s guilt, loneliness and frustration beautifully, while Gilshenan brings a dry humour to the role of Paul, convincingly portraying his physical limitations, pain and indignity as well as the emotional turmoil, all of which leave him wondering whether he wants to live.

Though the chemistry between McCune and Gilshenan doesn’t totally fire, the scenes between them are the play’s strongest.

The supporting characters, however, are sketchily drawn. Best friends Marty (Luke Joslin) and Kim (Elena Carapetis) – who have their own flimsy IVF story – come across as crass, insensitive and self-absorbed when visiting Paul in hospital. If there was any sense of subtext, we might feel they are nervous, unsure what to say or perhaps trying to hide their distress. As it is, it’s hard to believe Paul and Gabby could be close friends with such boorish people.

Paul and Gabby’s daughter Lucy (Annabel Matheson), a doctor, is also conveyed in a few broad strokes, while Renato Musolino does what he can with the Lou, the psychologist from the retreat who rather improbably reappears and tries to help Paul find meaning in life. 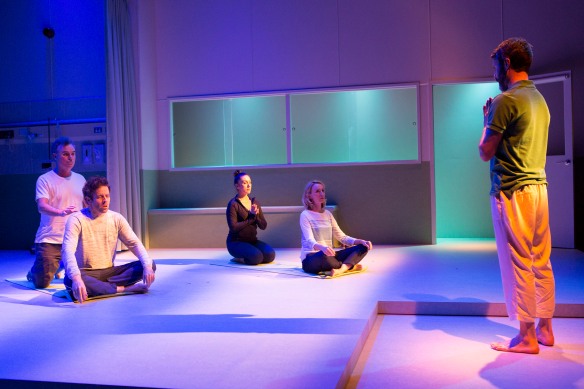 Jonathon Oxlade’s drab, unattractive set (lit by Nigel Levings) has a curtained hospital bed on one side of the stage and what feels like acres of poorly used, empty space on the other. (It may well sit better in the Dunstan Playhouse when the play goes to Adelaide). The hallucinations (which include Elvis for some reason) aren’t staged with any great imagination and visually it all feels rather bland and clichéd.

Machu Picchu explores interesting themes we can all relate to but it needs further dramaturgical work if it is to draw us in, provoke us and touch us emotionally. At present, it is only part way to becoming a compelling drama. 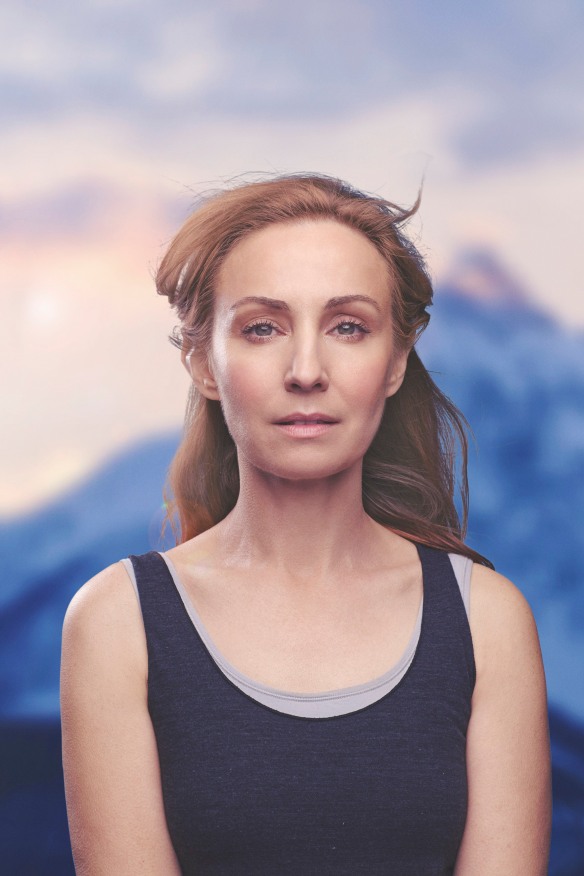 Australian sweetheart Lisa McCune, who shot to fame at age 22 as Constable Maggie Doyle in Blue Heelers, is about to take on her first middle-age roles. And it feels like “the right fit”, she says.

Best known for her television work and, more recently, her roles in musicals such as South Pacific and The King And I, McCune returns to straight theatre in a new Australian play called Machu Picchu opening tonight in Sydney in which she plays Gabby, a middle-aged civil engineer, whose life and marriage is upended when her husband is involved in a serious car crash.

In May, she plays Sally, a former showgirl who is now 49 but “still remarkably like the girl she was thirty years ago” in a concert version of the Stephen Sondheim musical Follies in Melbourne.

McCune, who recently turned 45, still looks extremely youthful herself but is very happy to embrace the more mature roles coming her way.

She describes Machu Picchu as: “a grown-up play about relationships and mid-life” and “a fascinating subject matter.

“It’s my first role playing (a middle-aged woman). Well, I suppose Anna in The King and I was too. But it’s a more mature part of my life as well so that is interesting to me. It’s not the ingénue any more. And it’s really nice to explore that,” says McCune.

“I don’t consciously go ‘oh these characters are older’. I think it’s just that feeling of the right thing. I certainly not going to be botoxing to try and play ingénues who are in their late 20s. It’s just where you start to fit I think.”

Though she denies giving too much thought to getting older, McCune admits that she felt different the second time she played the vivacious nurse Nellie Forbush in South Pacific.

“It’s funny, I did the first season of South Pacific (in 2012). By the time I came back to it a year later, I thought ‘I can’t play this any more’. I’m actually getting too old to play her and that’s when I did Anna and that felt right.

“It’s nice with this play (Machu Picchu) that it hasn’t been done before and there are no comparisons. We’re starting from scratch.”

Machu Picchu is a co-production between Sydney Theatre Company (who commissioned it) and the State Theatre Company of South Australia. It is written by Sue Smith, whose TV credits include Brides of Christ and Mabo and whose last play Kryptonite was premiered by STC in 2014.

It centres on a middle-aged couple who seem to have it all, but who must reassess their lives, priorities and relationship when the husband Paul is left a paraplegic after a car crash. The play moves back and forth in time, so that we see them before and after the life-changing accident.

Machu Picchu is worlds removed from the lavish musicals McCune has performed in of late, throwing up many questions about how you live your life after such an event. McCune’s character also wrestles with a lot of guilt.

McCune agrees it’s “tricky subject matter” but says the play has “many humorous moments” and “great heart. I think Sue’s language is really beautiful and her observations are fantastic,” she says.

In rehearsals, McCune found that performing in a straight play has required her to flex different acting muscles.

“It sharpens different things and that’s great. It’s the different language. A musical heightens things in different spots whereas when its just text, not backed up by songs, it doesn’t happen that way. So for me, it’s a new experience again. I’m finding it challenging – which is what you want out of your work really.”

Darren Gilshenan, who plays Paul, believes the role is very different to the parts McCune is usually cast in.

“I think she’s really excited that people will see her in a different guise and see what she’s capable of. This allows her to dig deep and find a lot of ugliness as well that you wouldn’t normally associate with Lisa,” he says.

Gilshenan is a fine comedy actor whose numerous credits include the seemingly hapless but kindly, occasionally wily neighbour Jack in Channel Nine’s Here Come the Habibs!, Uncle Terry in ABC-TV’s The Moodys and Bell Shakespeare’s hilarious production of The Servant of Two Masters.

McCune and Gilshenan have worked together once before: in the musical Urinetown for STC in 2006.

“I’ve admired his work for a long time. He was one of the reasons I wanted to do (Machu Picchu),” says McCune.

On the face of it, it seems almost perverse to cast an actor renowned for his physicality as a character in a wheelchair. But Gilshenan’s physical skills will be tested in Machu Picchu. “The level of detail that happens in the nine months (Paul is) in hospital, his development physically through rehab and the various stages needs to be very clear,” he says.

“I was saying to my wife after the first couple of day’s rehearsal that the scope of this piece emotionally, physically and intellectually, and what I can do with it, is fantastic. It’s a dream role.

“A lot of the comedy I’ve done recently is based on humour through the pain and truth of flawed individuals. But there’s always an awareness you’re in a comedy, whereas in this it’s really surprising where the real tragedy is at times. In the awfulness of the situation, there also a lightness and a comedy in there too.”

Smith has described the play as “both a grand love story, and a deeply ordinary one”, as well as a celebration of courage.

“That’s the part I love about it,” says McCune. “I’m such a romantic. I think the romantic side of it is really beautiful. It’s about a couple who are somehow meant to be together and how they are going to travel the next part of their life that’s really hard. It’s a tricky subject matter. I think Darren has had a lot to contemplate for his role.”

Asked if anything has happened in her own life to make her stop and take stock, McCune says: “I think for me the biggest turning point in my life was having children.”

McCune, who has never commented on her reputed relationship with opera singer Teddy Tahu Rhodes, has three children aged 15, 13 and 11 with her husband Tim Disney.

Machu Picchu rehearsed in Adelaide and has a season there after its Sydney run – which means a fair amount of time away from her Melbourne-based family.

“It’s one of the lines in the play: ‘work is work and it must be attended to,’” says McCune.

“It’s a different part of my life. Isn’t it funny: that’s what the play is about. It’s about living your life. And I guess for me I’m a better mum when I am doing some work. I think I feel more content. I’m happier and I’m happy to go and really throw myself back my life at home. I kind of need it.

“The kids are fantastic. They are a little bit older now and they understand that that’s the life that we’ve chosen (and) that they’re a part of. So they are OK and we just make sure we talk about it with them. And they’ll come away for holidays. Once you start throwing in holidays, you’re not actually away for that much.”