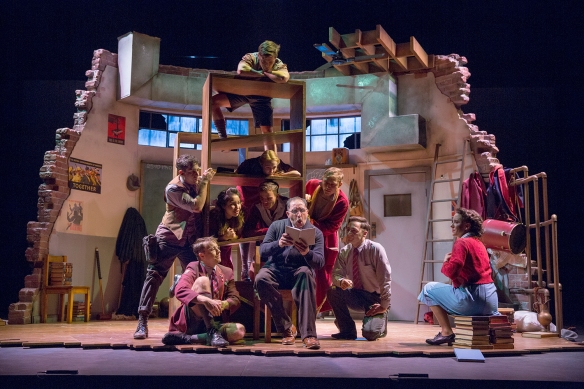 It is 1940. The date is clearly written on the blackboard in a basement room of a London school where a cardigan-wearing teacher (Keith Agius), some of his pupils and the school nurse (Danielle King) take shelter as German bombs rain down outside.

To distract the students from the air raid, the teacher hands out play scripts and an improvised performance takes place. Brief scenes from Richard II and Henry IV Parts 1 and 2 act as a prologue and then we are into Henry V, a play about war.

It’s an inspired device by director Damien Ryan, which doesn’t just frame Shakespeare’s play but runs parallel throughout the multi-layered production. We never forget that this is Henry V as performed by terrified young people during wartime.

Now and again the stories intersect in moments of enormous power – one of them deeply shocking, another incredibly poignant.

Directing for Bell Shakespeare, Ryan proves yet again what an exciting director of Shakespeare he is. Henry V is a dense play yet he brings a customary clarity, energy and modern edge to it.

Ryan was inspired by real life accounts he read of a Boy’s Club, which put on plays and cabarets to raise the spirits of people in London air raid shelters during the Blitz.

The terrific set by Anna Gardiner gives the cast bookcases, books, blankets, a bucket, newspaper crowns and armour, among various other props, which they use with thrilling invention.

In a play in which Shakespeare calls for the audience to use their imagination on an empty stage, Ryan gets us to do the same but with a plethora of props. Full of surprises, the staging is quite brilliant. It looks improvised, with the actors moving the furniture around at breakneck speed for different scenes, but it’s highly detailed and precisely choreographed. Full credit to movement director Scott Witt who worked with Ryan.

Sheasby plays Henry V with the charisma of the captain of the school rugby team. Everyone else plays multiple roles and yet it is always clear who is who and what is happening. Agius makes a wonderful Falstaff (with cushion up his cardigan) and also plays the Chorus, and Winestock is very funny as the feisty, French Princess Katherine, but each and every one of the actors plays their numerous parts with élan.

The sound by Steve Francis, moving vocal compositions by actor Drew Livingston and lighting by Sian James-Holland all contribute magnificently.

Ryan balances the valour and heroism of Henry – who has matured from the callow, irresponsible youth in Henry IV, who hung out in taverns with the reprobate Falstaff, to inspiring leader of his underdog “band of brothers” – with a powerful portrayal of the rank brutality, ugliness and futility of war.

This is one of the most exciting, moving pieces of theatre I’ve seen in Sydney this year. Don’t miss it.