Established in 2010, Packemin stages pro-am productions of major shows (Annie, Hairspray and Beauty and the Beast among others) for a fraction of the budget of the professional productions – and does a terrific job. In just five years, it has built quite a following and reputation.

Under Gooding’s canny leadership, Packemin’s productions feature a handful of professionals in leading roles, alongside a large cast of talented community performers. Staging-wise, the production values are pretty high given the tight budgets, while the tickets cost less than $50.

Packemin’s latest production is The Phantom of the Opera, one of the most phenomenally popular musicals of all time.

Obviously Packemin can’t match the lavish spectacle and superlative production values of the Really Useful/Cameron Macintosh production but they have a damn good shot at it.

A large chandelier does its stuff most effectively, the boat that takes the Phantom and Christine to his subterranean lair glides across the stage through swirling smoke, the rest of the sets are evocative, while the impressive costumes lend plenty of colour. All in all, it looks great.

The cast is led by Ben Mingay as the Phantom. As a bass baritone, the role doesn’t sit naturally in his vocal sweet spot and his voice doesn’t soar in the upper register as others before him have done, but he uses his rich baritone well. He also brings a dark, brooding charisma to the role. 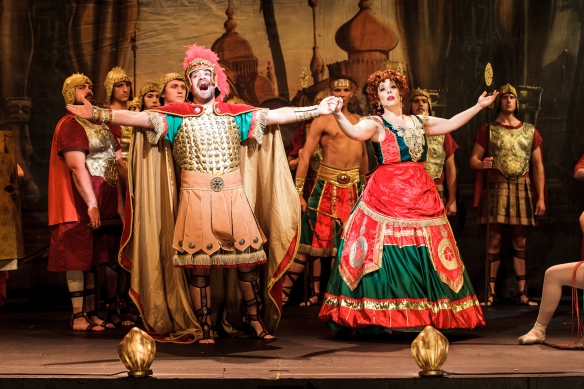 Johanna Allen is glorious as the flouncing opera diva Carlotta, unleashing a torrent of crocodile tears, pouts and indignant demands. Her comic timing is impeccable and she nails the role vocally.

Erin Clare uses her soprano well as Christine, though could bring a little more innocence to the role initially, while Joshua Keane makes a dashing young Raoul. Christopher Hamilton and Gavin Brightwell are very funny as the opera managers, working together with a lovely ease and assurance, and Michele Lansdown is a suitably dour Madame Giry.

It’s great to see such a large ensemble (around 40) on stage, all of whom perform with great commitment and verve. Musical director Peter Hayward leads a solid 21-strong orchestra.

The opening night audience was enormously enthusiastic and the rest of the season is now sold out. Next up from Packemin, Mary Poppins in July.

Gooding is emphatic that Packemin doesn’t position itself as a rival to the large-scale professional productions, which have budgets a pro-am company like this can only dream of. But Packemin is another lively element in Sydney’s musical theatre scene, and a great success story.

The Phantom of the Opera runs at the Riverside Theatre, Parramatta until February 21