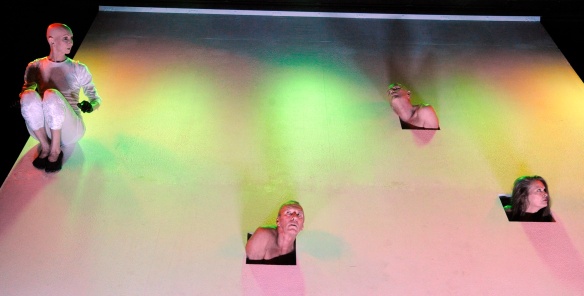 Since 2000, eminent sculptor and artist Ken Unsworth has collaborated with Australian Dance Artists (ADA) on a series of productions, which have now become a highly anticipated annual event for the lucky invited audience.

Part-performance and part-installation, frequently with live music, their work is unlike anything else we are seeing on Sydney’s dance scene.

ADA is made up of four senior/veteran dance artists who have had long, prestigious careers in contemporary dance: Anca Frankenhaeuser and Patrick Harding-Irmer who performed with London Contemporary Dance Theatre, and Susan Barling and Ross Philip, who performed with Sydney Dance Company. Norman Hall, who was ADA’s Founding Director, continues to work with them as a choreographic collaborator. 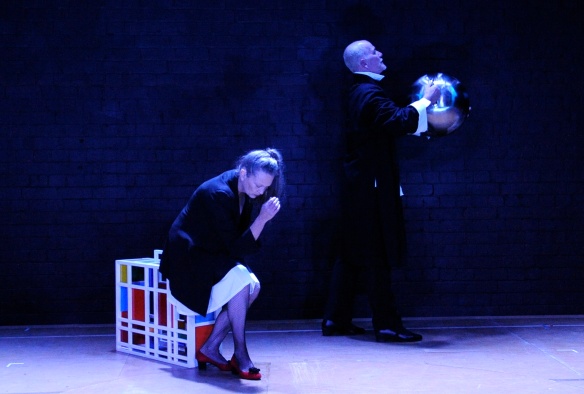 Their latest production, Departures, is currently weaving its inspired, crazy magic at Unsworth’s studio in Alexandria where he has built a stage and a small auditorium with three rows of church pews for around 50 people.

Unsworth, who basically finances the productions personally, has commissioned a new score from Jonathan Cooper for Departures, and it’s a beauty. It is performed live by members of the Australian Piano Quartet, Rebecca Chan, Glenn Christensen, James Wannan and Thomas Rann, augmented by Benjamin Kopp on piano, Genevieve Lang on harp and Katherine Lukey on violin.

As always, the production is full of extraordinary, surreal imagery with the choreography created in response to the music and the strange and wonderful sculptural creations that Unsworth has built.

The production begins with a huge ball, mirrored by a smaller one, swinging back and forth in hypnotic fashion, while a glowing orb rises and sets like the sun.

Appearing in a top hat with candles, shirt, pants and jauntily mis-matched, colourful socks, Unsworth begins painting figures on paper panels only to be manhandled and summarily dismissed as the dancers make their dramatic appearance.

From there, the production unfolds through a series of powerful images that explore themes of art, love, life and death.

Unsworth has built several large sculptural pieces: a steep slope which Frankenhaeuser traverses with exquisite, elegant poise while interacting with the heads that appear, almost Beckett-like, through trapdoors; a large, square metal frame with hidden secrets behind doors in various compartments; and a spinning double helix spiral staircase which disappears into the roof, which the dancers ascend and descend simultaneously.

There are also two walls – one which has an anguished Barling appearing and disappearing on a spinning shelf, and another with a door to which singer Clive Birch is strapped while singing upright and then upside down. 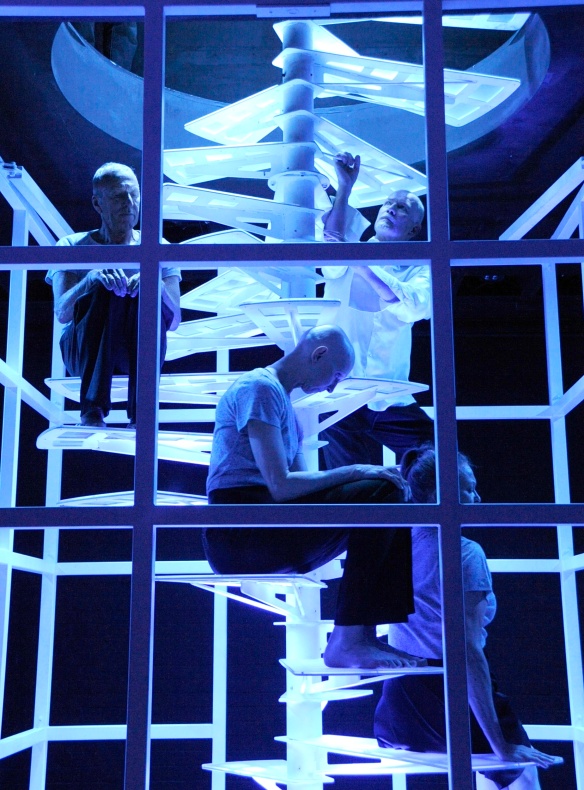 As well as commissioning the score, Unsworth has written the lyrics to a song, Never Ever, performed by Birch and young soprano Rioghnach Wegrecka who walks across the back of the stage from one brightly coloured chair to another.

There’s also a very beautiful, moving duet by Frankenhaeuser and Harding-Irmer, which subverts and distorts the movement to match the music, as well as numerous other striking images including Harding-Irmer in suit jacket and high heel shoes. As always, the movement is underpinned by a depth of emotion from the mature but still toned and eloquent dancers. 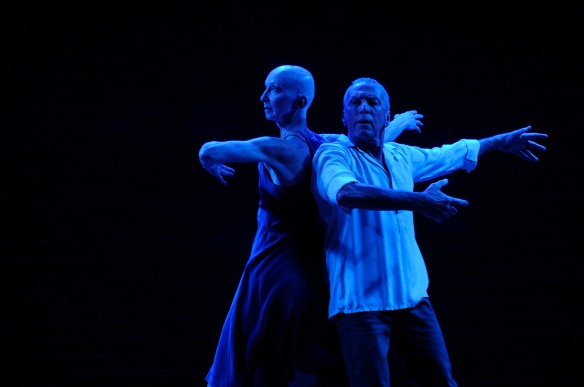 With lighting by Roderick van Gelder, costumes by Pamela McGraw and soundscapes by Nate Edmondson, Departures is another feather (candle) in the cap for a unique and inspiring company. Their work really should be more widely seen. 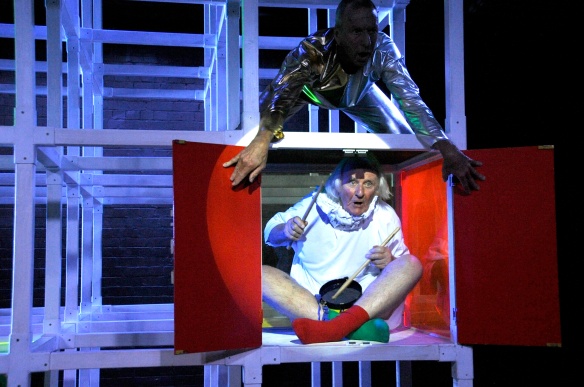 Ken Unsworth makes an appearance in one of his extraordinary sculptures. Photo: Regis Lansac 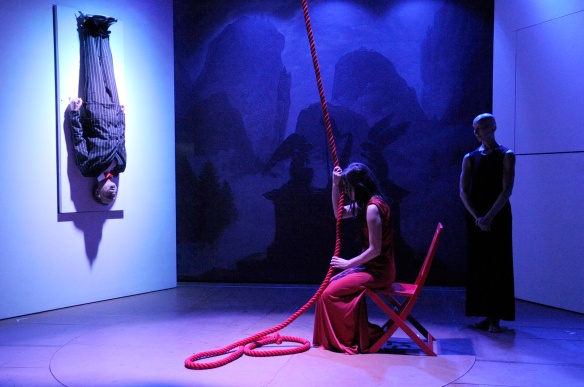