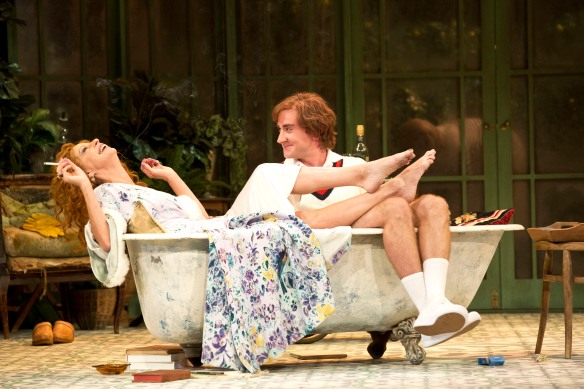 Noel Coward wrote Hay Fever when he was just 24 but already a star in the making. A comedy of gleefully bad manners, it was a huge hit when it premiered in 1925 despite lukewarm reviews and is still much performed.

Coward’s plays are deceptively difficult to do well. If the actors only give us superficial flamboyance and witticisms, the humour can all too easily fall flat. But Imara Savage has directed a fabulously funny production for Sydney Theatre Company that has a fresh edge and contemporary energy while still retaining a feel of the period.

The play is set in the household of the eccentric Bliss family. Judith Bliss (Heather Mitchell) is retired actress, determined to keep performing even if she no longer has a stage. Her husband David (Tony Llewellyn-Jones) is a novelist and their grown-up children Sorrel (Harriet Dyer) and Simon (Tom Conroy) still live at home, without appearing to work.

All four invite a guest for the weekend without telling each other, thrusting them into a maelstrom of games and idiosyncratic carry-on that leaves their visitors reeling.

Essentially a lightweight comedy, Hay Fever offers the audience a vicarious thrill in experiencing life with such wayward “artistic” types. But it also celebrates bohemian freedom and vitality, and contrasts that with the rather stuffy, conservative mores of “ordinary” people and their concerns about sex and class.

Alicia Clements’ wonderful design isn’t period specific but subtly combines elements from the 1920s with later decades, setting the action in an attractively ramshackle conservatory full of greenery and eccentric touches like a bathtub for a sofa. Only the inclusion of wheelie suitcases and the decision to have Judith lip synch to Amy Winehouse’s Back to Black when she offers to sing at the piano sit a little oddly.

Clements’ costumes are also terrific with all the Blisses in a permanent state of semi-undress or dressing gowns and the outfits of the other characters speaking reams about their personalities from the anxious Jackie’s girly cotton frocks and Alice band to the vampy Myra’s stylish couture. 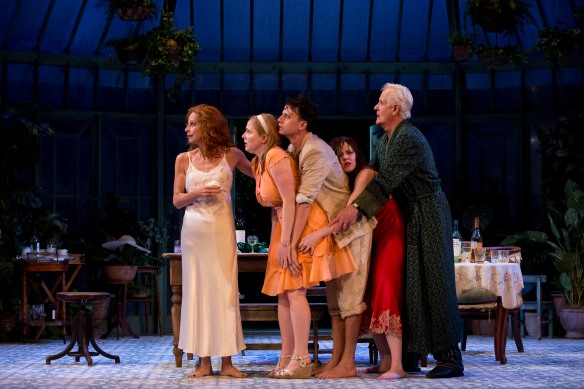 Savage’s excellent cast combines wit with truth. Towards the end of the play, some of the performing becomes broadly comic and more farcical but overall the characters all feel very real.

Mitchell is sensational as Judith, a whirling dervish at the heart of the play. Her comic timing is immaculate and she is gloriously funny as she tears up the stage. Llewellyn-Jones is distinguished yet grouchy as the rather self-absorbed David. Dyer plays Sorrel with a contemporary edge as a young woman testing who she is, while Conroy’s Simon affects a nonchalant flamboyance.

Helen Thomson as the chic, sardonic Myra, Alan Dukes as the proper “diplomatist” Richard, Josh McConville as the rather gung-ho sportsman Sandy, and Briallen Clarke as the mousey, nervous Jackie are the perfect foil as the beleaguered guests. Genevieve Lemon is also very funny in a broadly comic portrayal of the exasperated housekeeper.

The Bliss family can become rather unlikeable in productions but Savage avoids that, ensuring that their love for each other comes across as strongly as their hilariously appalling behaviour.

Hay Fever plays at the Drama Theatre, Sydney Opera House until May 21. Bookings: www.sydneytheatre.com.au or 02 9250 1777 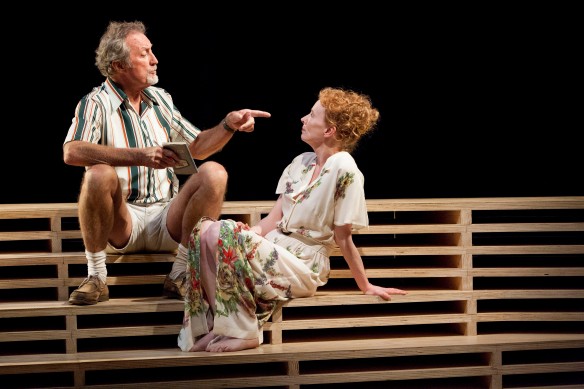 It’s a big year for David Williamson with eight of his plays to be staged in Sydney. It’s a shame then that the first of them – Sydney Theatre Company’s production of Travelling North – is a disappointment.

Written in 1979, Travelling North is a gentle, elegiac comedy about an autumnal romance between Frances (Alison Whyte, replacing the injured Greta Scacchi) and the grouchy, older Frank (Bryan Brown).

To the chagrin of Frances’s unhappily married daughters (Harriet Dyer and Sara West), she and Frank decide to head north together – but when Frank’s health fails there is trouble in paradise.

Directed by Andrew Upton, the production is hampered by David Fleischer’s stark, unattractive set. Performed on a large, slatted wooden platform backed by dark walls, with virtually no props, there is no sense of place, which the play needs. Instead, it is left to Nick Schlieper’s lighting to convey the shifts between chilly Melbourne and tropical Queensland.

It also seems odd that though the play stretches over a year or more, Whyte wears the same dress throughout while other actors have costume changes.

Brown brings little emotional depth or nuance to the role of Frank. He is at his most believable when angrily demanding information from his doctor (Russell Kiefel) but mostly looks slightly awkward as if uncomfortable on stage and captures little of Frank’s irascible charm.

Whyte is an elegant, dignified, warm-hearted Frances. Despite her late addition to the cast, hers is the most convincing performance, though Andrew Tighe gives the production an engaging shot in the arm with a very funny, sweet performance as the interfering but well-meaning neighbour in short shorts, socks and sandals.

It seemed to me that the problem is not in the writing. Williamson writes believable dialogue laced with a wry, gentle humour and canvases pertinent issues: older love, the generation divide and the way grown-up children so often demand that their parents remain at their beck and call – something we see a lot these days as more and more grandparents find themselves co-opted as child carers. We should care about the characters a whole lot more than we do here.

Instead, it feels as if none of the different elements of the production have really gelled. The emotional heart of the play is missing in this rather one-dimensional production, which doesn’t do Williamson justice.