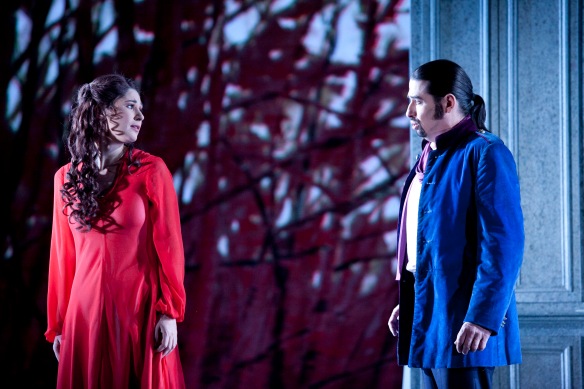 When Nicole Car went to the wings to lead conductor Guillaume Tourniaire on stage during the opening night curtain call for Eugene Onegin, he dropped to one knee and kissed her hand.

It seemed the perfect acknowledgement of Car’s radiant performance as Tatyana in Tchaikovksy’s passionate, melancholic opera of lost love based on Pushkin’s novel.

Overall, the production is thoughtful, deeply moving and passionately performed though there are elements that occasionally jar.

Holten has decided to frame the opera in the memory of the two central protagonists, Tatyana and Onegin, staging it as if they are looking back on their lives: Tatyana’s passionate declaration of love in a letter when they first meet in the country, Onegin’s rejection of her, the duel in which Onegin kills his best friend Lensky, Onegin’s later realisation that Tatyana is the love of his life, and her rejection of him, choosing to remain loyal to her husband Prince Gremin despite her feelings for Onegin.

Holten has two solo dancers playing their younger selves at pivotal points in their relationship, while the singers watch on, either singing or merely observing.

The results are mixed. At times, it feels unnecessary. The emotion is all there in the music anyway and Car, in particular, is such an expressive performer vocally and dramatically that we don’t need a dancer to act out what she is feeling. In the letter scene the dancer is distracting – though it is moving to see the compassion with which Car watches her younger self.

It is also affecting to see Onegin’s younger self emotionally undone by having killed his best friend Lensky in a duel, while Dalibor Jenis stands to one side, bolt upright as he sings, all emotion internalised.

Dance features prominently in the opera, so you can see understand why Holten decided to extend its use. There’s the peasant’s dance, a waltz when Onegin flirts with Tatyana’s sister Olga to punish Lensky, a polonaise and the ball at Prince Gremin’s palace.

Holten’s portrayal of the Act III polonaise is brilliantly done, becoming a sinister evocation of Onegin’s travels through Europe. Surrounded by female dancers, who flirt with him, reject him and die in his arms, it is disturbingly effective.

The simple staging works well for the most part. Mia Stensgaard’s grey set – three sets of towering double doors with bookcases between them, which open to reveal projections of the landscape behind – suits the opening act.

However, the set feels cramped later on, particularly for the ball at Gremin’s palace. This is doubtless in part because of the small Sydney Opera House stage. The problem is compounded by remnants from the past being left on stage to represent memories crowding in on them: a crumpled letter, a broken chair, the branch and snow from the duel scene, and even Lensky’s corpse.

Having Lensky’s body on stage becomes increasingly distracting and in the tight space the branch twice got caught on dresses at the ball.

Katrina Lindsay’s lovely costumes work extremely well. The dark clothes for the peasants and for the socialites create a sense of gloom and doom in the background, against which the red and sparkling white of Tatyana’s dress, royal blue of Onegin’s jacket and turquoise of Olga’s frock stand out.

Making her debut in the role, Car is outstanding as Tatyana. She sings beautifully across her entire range with a gorgeous clarity and expressiveness, while her acting rings deeply true as she moves convincingly from youthful naivety to mature dignity.

They are well supported by James Egglestone as Lensky, Sian Pendry as Olga, Dominica Matthews as the girl’s socially ambitious mother Madame Larina and Jacqueline Dark as their loving nurse Filippyevna.

The orchestra does justice to Tchaikovsky’s rich, beautiful, soaring score under Tourniaire’s baton, while the chorus sings superbly.

All in all, despite the odd dramatic distraction, this is a powerful, moving production full of raw passion and aching sadness.