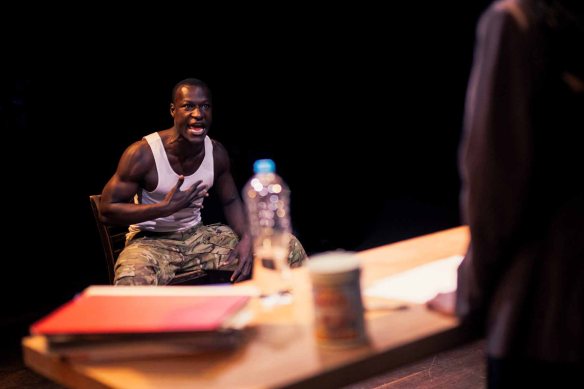 In presenting the Australian premiere of Black Jesus by UK playwright, bAKEHOUSE Theatre company gives us a glimpse into a world that few of us know about a great deal about and one that is rarely portrayed on our stages.

Black Jesus is set in Zimbabwe in 2015. Robert Mugabe’s government has fallen and a new Truth and Justice Commission has been established to investigate the horrific crimes committed during his regime.

A young woman called Eunice Ncube (Belinda Jombwe-Cotterill) is called up to question a prisoner called Gabriel Chibamu (Elijah Williams) about atrocities he is alleged to have committed as one of the most notorious members of Mugabe’s youth militia, the Green Bombers.

Gabriel is known as the Black Jesus because, as he says: “I decided who would be saved and who would be condemned. I took that responsibility for others and I now I take it for myself. I am Black Jesus. I do not crawl.”

The new Zimbabwe government is keeping an eye on Eunice’s investigation through Endurance Moyo (Dorian Nkono), a smooth-talking political operator who has known her since she was a child. Then there’s Rob Palmer (Jarrod Crellin) a white lawyer working with Eunice and with whom she has had a brief affair. He wants to support her but as soon as the threats start, he is quickly out of there.

Black Jesus evokes a dark world of violence, corruption and buried secrets where nothing is clear cut; everyone shares some form of guilt and is a victim at the same time.

Produced by John Harrison, co-artistic director of bAKEHOUSE Theatre, Suzanne Millar directs a taut, powerful production. With a simple but striking set – an African tree painted on the wall with branches overhead (set design by Millar and Harrison) – Millar uses the slightly awkward space (two banks of seating on either side of a flat stage) extremely well. The use of a drummer (Alex Jalloh) helps build atmosphere and tension.

Millar has assembled an impressive cast. As Eunice, Jombwe-Cotterill looks small and fragile but allies that with a quiet steeliness. She is frequently extremely still, which gives her an understated strength and resonant presence, and meets Gabriel’s ferocious energy with a cool, hard stare. As Gabriel, Williams exudes an intimidating, explosive rage that feels genuinely threatening. Together, the game of cat-and-mouse they play keeps you tense.

Though Eunice’s relationship with Rob is not particularly well developed, Crellin is very convincing in the role, while Nkono conveys the danger lurking just beneath Moyo’s ebullient joviality.

Running an intense 75-minutes, Black Jesus raises questions about societies trying to recover after brutal regimes and sends you home, intrigued to find out more about the complexity of life in Zimbabwe. Well worth a look.