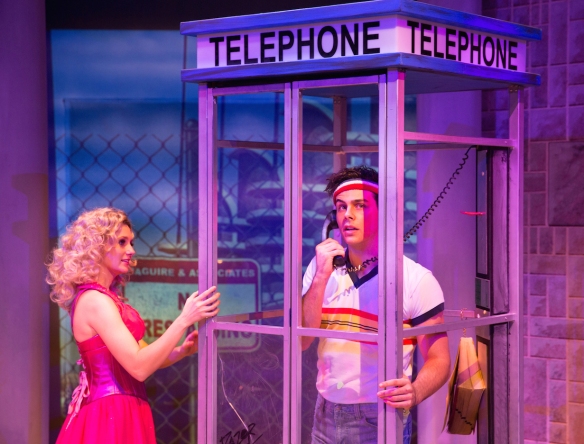 The 1980 film Xanadu starring a roller-skating Olivia Newton-John was a famous flop, so outrageously bad that it became a cult classic.

Gleefully spoofing the movie, Xanadu the Musical proved to be a ditzy delight when it premiered on Broadway in 2007. Unfortunately, this heavy-handed production directed and choreographed by Nathan M. Wright for Matthew Management in association with the Hayes Theatre Co steamrollers the heart and much of the comedy out of the sweetly silly show.

Set in 1980, Sonny is a depressed, creatively blocked street artist with more muscles than brain. Clio, a beautiful Greek muse and daughter of Zeus, descends from Mount Olympus to Venice Beach to save him. Donning leg-warmers, roller skates and an Australian accent, she calls herself Kira and inspires him to reach for the stars – or at least open a roller disco.

Meanwhile, two of Clio’s jealous sisters try to trick her, hoping she will incur Zeus’s wrath by falling in (forbidden) love with a mortal.

Writer Douglas Carter Beane has laced his wonderfully tongue-in-cheek, knowing script with jokes about 1980s culture and musicals. At one point, for example, Zeus observes that 1980 will be a cultural turning point: “Creativity shall remain stymied for decades. The theatre? They’ll just take some stinkeroo movie or some songwriter’s catalogue, throw it onstage and call it a show.”

The score, featuring music and lyrics by Jeff Lynne from ELO and John Farrar, is just as much fun, full as it is of chart-topping hits such as Magic, Evil Woman, All Over the World, Suddenly and Xanadu. 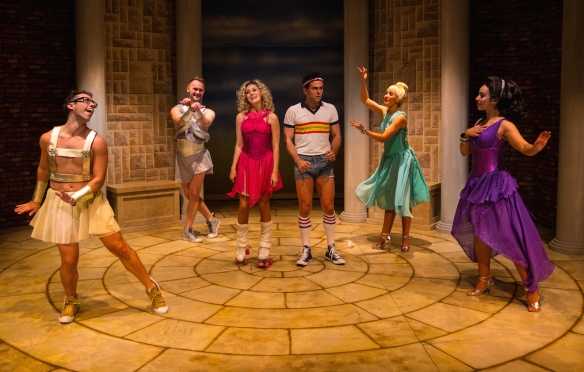 Wright’s lively, 80s-inspired choreography is also amusing, particularly the sequinned formations on skates at the end. His direction, however, lacks a lightness of touch. Everything is hammered out at the same relentless pace and volume, with the scenery-chewing cast dialling their performances up to 11. Some of the one-liners are thrown away, lost in motor-mouthed shouting. At other times, the humour is laboured. Either way, much of the comedy falls flat. The sound doesn’t help, with the volume on Andrew Bevis’s four-piece band cranked high.

As Kira and Sonny, Jaime Hadwen and Ainsley Melham both sing well but there’s little chemistry between them. In his first musical since leaving Hi-5, Melham’s comic timing is awry. Mugging in cartoony fashion, his blunt reading of the role diminishes the character’s goofy charm. Hadwen has a sweet presence though her strident Aussie accent dominates her portrayal.

The biggest laughs of the night come from Francine Cain and Jayde Westaby, both wonderful as Kira’s scheming sisters Calliope and and Melpomene.

Pitched right, Xanadu can be ridiculously funny. This production (which runs 90 minutes without interval) has its moments and sections of the audience clearly loved it, but I felt it pushes too hard and as a result never quite gets its skates on.

A version of this review ran online for Daily Telegraph Arts 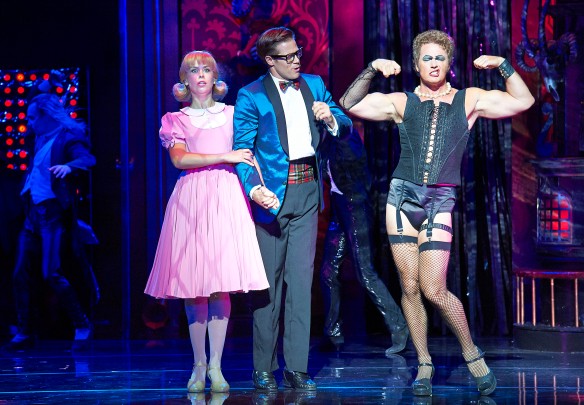 It was great when it all began….. The Rocky Horror Show started life as a small, gritty production whose outrageous parody of 1940s to 1970s B-grade sci-fi and horror films felt genuinely subversive, shocking and theatrically groundbreaking.

Australian director Jim Sharman and designer Brian Thomson had a great deal of input in helping Richard O’Brien (who wrote book, music and lyrics) create the aesthetic. They were also instrumental in expanding, developing and guiding the show from an experimental production Upstairs at London’s Royal Court Theatre in 1973 to the Chelsea Classic Cinema on the Kings Road and from there to world, taking it to the screen too as The Rocky Horror Picture Show.

Over the years, the musical has become lighter, brighter and tamer: an anodyne parody of itself. These days it’s called Richard O’Brien’s Rocky Horror Show and so much of the edgy strangeness that made it a cult in the first place has been lost along the way.

While it is never going to shock in the way that it originally did, I’m sure there is a stripped-back, darker, dirtier, sexier production, closer to its roots, just longing to do the timewarp in Australia. Gale Edwards tried in 2008 with a (fairly glossy) production starring iOTA, but though it had a lot of going for it, it still didn’t manage to capture the danger of the original. (Apparently O’Brien and the British producers disliked some of what she had done and insisted on last minute changes).

For this 40th anniversary production, which originated as a UK tour, Christopher Luscombe directs one of the loudest, most colourful, glib productions yet. Gliding across the surface of the show, it’s a cartoon-like, bubblegum, party version verging on pantomime.

Hugh Durrant has designed a flexible set framed by rolls of film. The bottom right corner of the ruched front curtain is slightly torn, but that’s about it for any kind of grubbiness. Instead, the perky aesthetic is established right up front with a cartoon car for Brad and Janet and a cartoon castle, with comical Phantoms poking their heads out from behind it. There’s a fairly opulent interior for “the Frankenstein place” and some sci-fi looking gizmos for the science lab.

Sue Blane has reworked her original costumes to make them brighter, cleaner and sparklier, which work well within the world created. 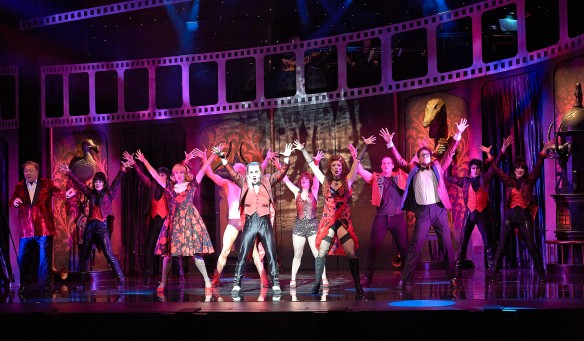 Craig McLachlan is a forceful presence as Frank-N-Furter, a role for which he first donned the fishnets in 1992 – but not in the way Frank should be. He goes for broke, strutting his stuff to the max but all too often his shameless mugging goes a step too far.

He frequently breaks the fourth wall. Most Frank-N-Furthers interact with the audience but not to the degree that McLachlan does. So many of his winks, leers and suggestive gestures are overdone that it becomes hammy and his comical antics during the seduction of Brad and Janet are plain tacky.

Frank should be irresistibly sexy, crazed and dangerous. McLachlan’s Frank is none of these things. Instead he plays the role for laughs.

As the squeaky clean Brad and Janet, Amy Lehpamer and Stephen Mahy give nicely centred performances that help keep things real amid the frenzy. Lehpamer’s Janet evolves dramatically and vocally over the course of the show, to match the character’s growth, and both sing strongly.

Angelique Cassimatis is a spunky dynamo as Columbia, shining in the role. Jayde Westaby gets the show off to a great start as the usherette, Kristian Lavercombe brings a soaring rock voice to a rather manic Riff Raff, and Bert Newton as the Narrator is, well, Bert Newton.

The production has little heart or teeth, and if you didn’t know the story – such as it is – some of it could well be lost in the frenetic carry-on, with the ending coming somewhat out of nowhere. Nonetheless, the show has been selling out around the country and many in the Sydney opening night audience embraced as it as pure fun. It is fun  – but there is so much more to Rocky Horror than that.

The Rocky Horror Show plays at the Lyric Theatre until June 7. Bookings: www.ticketmaster.com.au or 136 100