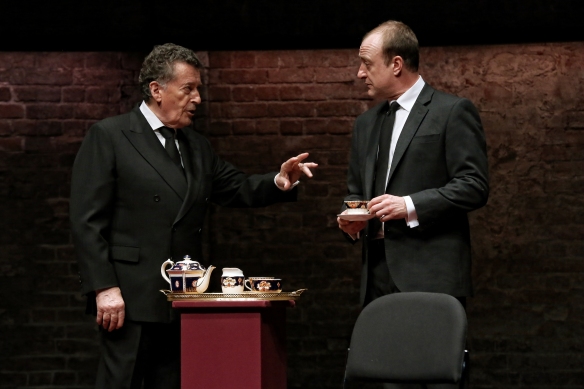 Unlike the Queen, who never meddled in affairs of State, Charles hasn’t even made it to his coronation when he astonishes the Prime Minister by refusing to sign a bill restricting the freedom of the press. With neither Charles nor Parliament prepared to budge, a constitutional crisis looms. Before long there’s unrest on the street and a tank parked outside Buckingham Palace.

So begins Mike Bartlett’s fascinating play 2014 King Charles III. Directed by Rupert Goold for London’s Almeida Theatre, it has had hugely successful seasons in the West End and on Broadway. Now a British company led by Robert Powell as Charles, which has been touring the play around the UK, is in Sydney with a finely honed production.

Set in the near future, King Charles III has the ring of one of Shakespeare’s history plays with Charles as a tragic figure: a principled man with a conscience but also a yen to hold more sway than a mere figurehead.

The Duchess of Cambridge, meanwhile, is well aware of the monarchy as a brand, its strength measured in column inches.

There are numerous Shakespearean echoes through the play with references to Lear, Henry IV, Macbeth Richard II and Hamlet. Bartlett has even written most of it in blank verse (apart from scenes featuring Prince Harry and his commoner girlfriend Jess, a Republican arts student from a working class background) using the iambic pentameter as Shakespeare did. 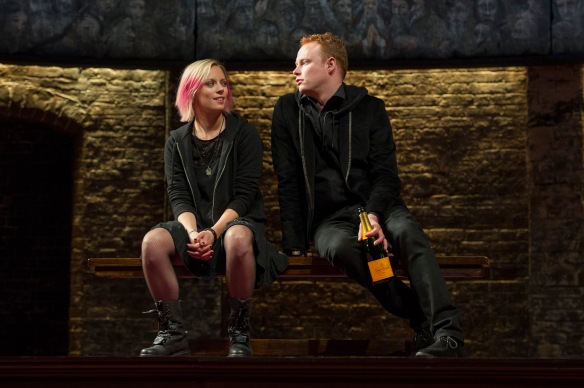 It’s a clever, daring concept, which Bartlett has pulled off with considerable skill and wit. The language is actually very accessible, so much so you almost forget that it’s verse at times, while the inclusion of contemporary words and phrases is often very funny.

Though there’s certainly a comic frisson in first meeting the Royal characters – Charles, Camilla, William, Kate, Harry and a certain family ghost proffering conflicting prophecies – the play is by no means a parody. The characters are presented as real and Bartlett canvasses serious issues regarding the role and value (if any) of the Royal Family, the power of the media, and the impact of a rapidly changing society on the mindset of its people.

However, a small section of the opening night audience seemed determined to see the play in superficial terms and laugh at everything, upsetting the rhythm and tension of certain scenes.

What the play doesn’t generate is a great deal of emotional connection. Charles’ fate is unexpectedly moving and Harry’s misgivings and confusion about his role in life are touchingly understandable but mostly it’s a cerebral affair.

Designer Tom Scutt sets the action on a raised dais surrounded by a bare brick wall with darkened doors and a frieze of blurry faces suggesting the populace beyond the palace walls. Using minimal props, Goold stages the action with elegant simplicity. Stylised touches such as the choral singing and the use of Guy Fawkes masks in a street riot are strikingly effective. Only the scenes with the ghost feel unconvincingly staged.

Jocelyn Pook’s score adds plenty of atmosphere, and captures a sense of past and present with music ranging from the opening Requiem to pulsing minimalist chords.

Powell is marvellous as Charles, portraying a dignified but conflicted man driven by an uneasy mix of idealism and frustration after his long wait to become king. As the play unfolds, he also displays a slightly manic attachment to the power of the monarch, while his sense of betrayal is keenly felt. 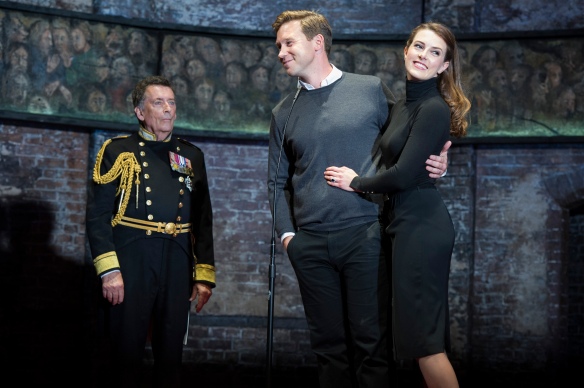 Robert Powell as Charles with Ben Righton and Jennifer Bryden as Will and Kate. Photo: Richard Hubert Smith

Jennifer Bryden and Ben Righton do a wonderful job of capturing the clean-cut, photogenic glamour of Kate and Will, before revealing a steely strategic nous.

In a comic sub-plot reminiscent of Prince Hal in Shakespeare’s Henry IV Part I, Harry is portrayed as a disconsolate, troubled figure unsure of his role in life. Dressed in hoodie and jeans, Rupert Glaves conveys a surly passion and vulnerability as he contemplates life with a commoner, rather than the affable ease that the real ginger-headed Prince projects, while Lucy Phelps is a spirited Jess.

Carolyn Pickles is very funny as Camilla, urging her man to stand firm while displaying little understanding of what is unfolding. Tim Treloar is excellent as the Welsh Prime Minister, who is not a million miles from former Labour leader Neil Kinnock, while Giles Taylor exudes a born-to-the-manor confidence as the Tory opposition leader.

King Charles III is excitingly adventurous theatre in the way is plays with form. It also ignites healthy debate. With the Republican issue still unresolved in Australia, the foyer was full of heated discussions afterwards.