Iain Sinclair has directed a production of John Steinbeck’s Of Men and Men for Sport for Jove that feels heartbreakingly truthful.

Steinbeck himself adapted the play from his classic 1937 novella set during the Depression. Two itinerant ranch workers George Milton (Anthony Gooley) and Lennie Small (Andrew Henry) have been roaming California looking for work. To keep them going, George inspires Lennie with the dream that one day they will buy their own property (from some elderly folk he knows) where they will keep a few animals including Lennie’s longed-for fluffy rabbits.

The trouble is that Lennie is a bit soft in the head. A gentle-minded giant who doesn’t know his own strength, he keeps petting small animals to death. Arriving at a farm, George tells Lennie to say nothing, keep his head down and do what he says in the hope that they will be left alone and all will be well. And Lennie so wants to do the right thing but when situations conspire against him, he just can’t help himself.

Sinclair has directed a beautiful, understated production that unfolds at an unhurried pace, while still building the feeling of inexorable tragedy. It is a clear, empathic reading that strikes at the heart, while the play feels as timely as ever given the vast numbers of displaced, disenfranchised, struggling people the world over.

Sinclair has cast it perfectly – right down to the poor old dog, which is taken out and shot because it is stinking up the place. It’s a tense moment as we wait, seemingly for ages, to hear the shot – foreshadowing things to come. 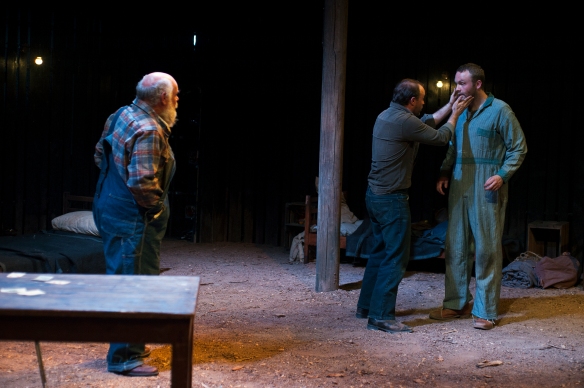 Henry gives an unforgettable performance as Lennie. He is a tall man and naturally slim but he stacked on around 20 kilos for the role. It certainly gives him a sense of bulkiness, emphasised by the way he stands very squarely and solidly when still, feet planted apart, and lumbers around the stage in his dirty overalls.

He also captures Lennie’s naivety beautifully with a slightly bemused expression. When something delights him, he gives this childish little jump of joy accompanied by a beatific smile. At times, it’s almost unbearably touching, knowing what’s coming.

Gooley balances him perfectly as the loyal, steady George who battles constant frustration but stands by Lennie through thick and thin. The two of them really do convey the feeling of a long-standing relationship and of great love.

They are surrounded by an impressive ensemble: Christopher Stollery as Slim, a decent man with natural authority, Laurence Coy as Candy, an old-timer who has lost one hand and who allows himself to dream of a better future with George and Lennie, John McNeil as the bullish Carlson, Tom Stokes as the young, inexperienced Whit, Andre de Vanny as the boss’s aggressive son Curley, Anna Houston as Curley’s unhappy wife, Terry Serio as the Boss (who also plays some guitar blues), and Charles Allen as the segregated black worker Crooks.

Running around two hours and forty minutes including interval, the production keeps you gripped throughout. As it moves to its shattering conclusion you can feel people holding their breath. On the night I saw it there was a long silence at the end – a mark, I think, of how deeply affected people were.

Of Mice and Men plays at the Seymour Centre until August 1. Bookings: www.seymourcentre.com or 02 9351 7944