Nakkiah Lui in front of a photograph of her nana Joan. Photo: Brett Boardman

In Kill the Messenger, Australian playwright Nakkiah Lui tells two troubling stories about people dying before their time: victims of what she calls “institutionalised racism”.

The first, she heard about from her mother who is a nurse. Paul, an Aboriginal man with a drug addiction, was turned away from a hospital emergency ward. They thought he was pretending to be in agony just because he wanted drugs. In fact, he had undiagnosed stomach cancer and hanged himself later that night in a park.

The other is about her beloved nana Joan, who died after falling through the floor of her rotting, termite-infested home, despite Lui and her mother reporting the problem to the Department of Housing everyday for a year. Because it was public housing for Aboriginal people, the complaint kept being put to the bottom of the pile and nothing was done.

This kind of invisibility is all-too-common, suggests Lui, when you are black and living in a predominantly white society.

Lui, who is a Gamillaroi and Torres Strait Islander woman, includes herself as a character in the play. While she hadn’t initially intended to, she plays herself in the production as well, having had to audition for the role. The on-stage Nakkiah interacts in scenes with the other characters and talks directly to the audience at times about writing the play.

Directed by Anthea Williams on a starkly minimal set by Ralph Myers (a square of light on the stage, a couple of props, some projections), Kill the Messenger is unadorned storytelling at its most powerful: raw, passionate, angry, urgent, real and full of sadness. 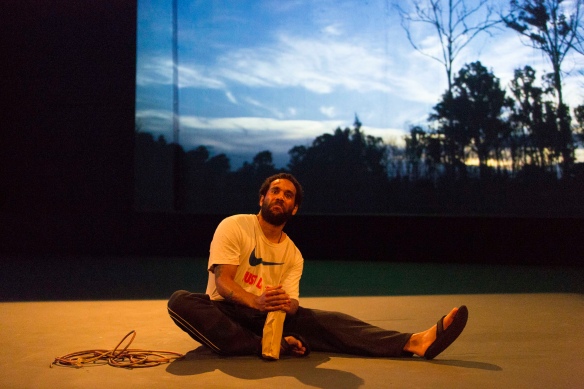 The play slides between documentary and the imaginary as Lui tells her “tale of black oppression”. It’s a politically charged piece, yet she tells it with humour too. And while she makes no bones about the constant injustices faced by her people, she also allows the harried, overworked emergency nurse who sent Paul home a voice. She doesn’t condone what he did or the system that he works within, but she lets him explain how it happened.

We also meet Paul’s sister Harley, who tries so hard to help Paul get off drugs, and Nakkiah’s boyfriend with whom she makes love (triggering a lovely quip about how she had imagined Miranda Tapsell would be playing her) and fights.

There are strong performances from the tight ensemble cast: Lasarus Ratuere as Paul, Katie Beckett as his sister, Matthew Backer as the nurse and Sam O’Sullivan as Lui’s boyfriend. Lui herself is a strong, warm, fierce presence and drives the production.

At one point, pondering her nana’s death, Lui asks a series of ‘what ifs?’ going all the way back to “what if the Brits never came and Cook and just fucked off and people weren’t dispossessed and we never needed the Housing for Aboriginals….?’” But she knows there are no answers to that; all she can do is tell her story and hope we listen. To hear it from her own lips makes it especially powerful, while the projected photographs of herself with her nana as a young girl, and of her nana in hospital after the fall, are deeply affecting.

Lui showed great promise with her first play This Heaven, staged in Belvoir’s Downstairs Theatre in 2013. She has also been a writer and actor for the ABC’s Black Comedy and a writer on Blak Cabaret seen recently at the 2015 Sydney Festival.

Kill the Messenger (with dramaturgy by Jada Alberts) confirms what a talented, passionate, astute writer she is. The play is a powerful plea for us to take note and do something to stop this kind of casual injustice happening.

Kill the Messenger runs at Belvoir St Theatre until March 8