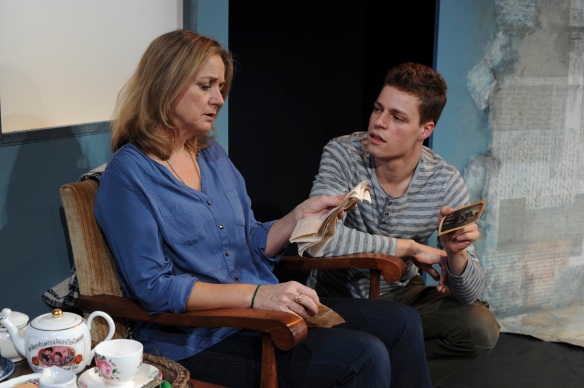 Monkey Baa Theatre Company has made its reputation with delightful stage adaptations of well-known books and stories for children and young people (aged three to 18).

The Unknown Soldier is its first brand new play, written by the company’s co-creative director Sandra Eldridge to honour the centenary of World War I.

Aimed at young people aged 10+, it’s a moving two-hander, examining dark themes including the horror of war and the devastating impact of Post Traumatic Stress Disorder without shying away from their seriousness but handling them with a light touch.

The play uses a simple device to move between two eras and stories. Thirteen-year old Charlie is staying with his pacifist Aunt Angela because, as we learn during the course of the play, his soldier father has returned from Afghanistan with PTSD and needs help.

To try to distract the bored teenager from doing little but play a computer war game, his aunt produces an old suitcase she has bought without inspecting its contents. Looking through it, they discover letters from a young Australian soldier called Albert, who fought in France in the Battle of Fromelles, written to his mother.

Felix Johnson plays both Charlie and Albert. Fascinated by what he reads in the letters, Charlie starts doing research on the Internet to find out more about Albert and his fate.

Eldridge plays Aunt Angela and Grace, a volunteer nurse who goes to France in search of her son, who is missing in action, and tends to the wounded Albert.

Eldridge researched the piece by examining war archives, diary extracts, books and poetry. Without the play ever feeling like a lecture, she conveys historical information about the Australian involvement in France in World War I and the horror of war both then and now.

She explains what PTSD is and how it can affect soldiers and their families. She introduces the Unknown Soldier and explains a little about who he is and what he represents. She also includes a brief section about the Australian War Memorial and touches on the meaning of ANZAC Day.

Her great achievement is to include all this within the context of an involving drama in which the information emerges naturally from the parallel stories she has created, and to convey it simply and clearly.

She has also leavened the play by folding in some gentle humour, with laughter on opening night at Charlie’s boredom, his frustration with his aunt’s slow Internet and his dislike of her organic, vegetarian cooking.

Matt Edgerton directs with great clarity on an impressive set by Anna Gardiner: a lounge room backed by a wall with jagged edges as if it has been damaged in a bomb blast, with little sections of the wall used to reveal various lighting effects. Matt Cox’s atmospheric lighting design and David Stalley’s sound help us imagine the scenes in the trenches, even though the home furniture is still used. It’s simply but effectively done.

Johnson moves convincingly between 13-year old Charlie and Albert (merely adding a slouch hat) and his revelation of Charlie’s fears for his PTSD-affected father is very touching. Eldridge is a warm, reassuring presence as both Angela and Grace.

My only quibble would be that Charlie articulates and understands ideas that might be a bit sophisticated for a 13-year old. A friend suggested it would perhaps be more convincing if the character were 15. But that’s a minor qualm.

There weren’t a huge number of young people in the opening night audience, and quite a few of those who were there were younger than 10, so it’s hard to gauge what the target audience would make of it. I imagine they would respond very positively to a thoughtful play that handles difficult themes with a great deal of integrity and care, and which seems to me to be well pitched for young people.

The Unknown Soldier plays at Lend Lease Darling Quarter Theatre until May 22. Bookings: www.monkeybaa.com.au or 02 8264 9340