Anthony Warlow is without question one of Australia’s greatest musical theatre performers – and he proves his star power once again with a sublime portrayal of Tevye in Fiddler on the Roof.

The 1964 musical by Jerry Bock, Sheldon Harnick and Joseph Stein is a much-loved classic for good reason. The glorious score with its stirring, achingly beautiful melodies includes songs such as If I Were a Rich Man, Tradition, Matchmaker and Sunrise Sunset.

Meanwhile, with the number of refugees in the world today, the theme of religious persecution and displacement feels as resonant and relevant as ever – though the story is as much about love, family and community, with plenty of humour as well as heartache.

Fiddler is set in 1905 in the small Jewish village of Anatevka in Tzarist Russia. Tevye is a poor milkman, with five daughters, who struggles to hold onto tradition in a changing world. This new Australian production, directed by Roger Hodgman, is fairly traditional and solidly staged without being particularly inventive but it is deeply felt and beautifully performed. Richard Roberts’ no frills set is simple but effective: a wooden box with cutout shapes for the houses, which are wheeled forward and spun around to reveal interiors.

Dana Jolly has done a fine job of reproducing Jerome Robbins’ original choreography, which feels wonderfully authentic to the time and culture. The ensemble dancing is terrific, exuding an exuberant, robust energy particularly in the wedding scene.

There are lively, new orchestrations with more of a folksy feel, and the sound from the ten-piece orchestra under musical director Kellie Dickerson is rich and vibrant.

Warlow’s Tevye is playful, sprightly and big-hearted, giving way to a moving gravitas. His acting and comic timing are impeccable. His wry conversations with God are accompanied by a lovely twinkle in the eye, while his outbursts of blustering anger are always tangibly underpinned by love and his own internal struggle. Meanwhile his vocals are masterful, the gorgeous tones flecked with the emotion of each lyric.

As his wife Golde, Sigrid Thornton has a small, light voice (made more obvious when she sings with Warlow) but she gives a strong characterisation even if it becomes a little strident at times. Teagan Wouters, Monica Swayne and Jessica Vickers each create detailed characters as Tevye’s tradition-defying daughters Tzeitel, Hodel and Chava, and Swayne charms with a heartfelt, beautifully sung rendition of Far From The Home I Love. 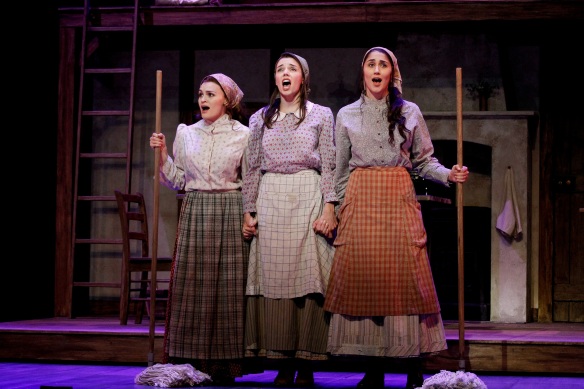 Blake Bowden brings charisma, fiery passion and lovely vocals to the role of Perchik, the idealistic, revolutionary student. Singer-songwriting Lior gives a gentle portrayal of the humble, hard-working tailor Motel and after a slightly hesitant start on opening night, his rendition of Miracle of Miracles shines, bringing a different vocal texture to the show.

Mark Mitchell is a strong presence, physically and vocally, as the wealthy butcher Lazar Wolfe playing him with such truth and depth that you empathise with the character much more than you might. On the other hand, Nicki Wendt’s broadly comic portrayal of the matchmaker Yente feels a little too much like a well-oiled stereotype lacking in genuine humanity and some of the humour goes begging.

At the centre of it all is Warlow in a magnificent, unforgettable performance – one that musical theatre fans won’t want to miss.

Fiddler on the Roof plays at the Capitol Theatre until May 8. Bookings: www.ticketmaster.com.au or 136 100