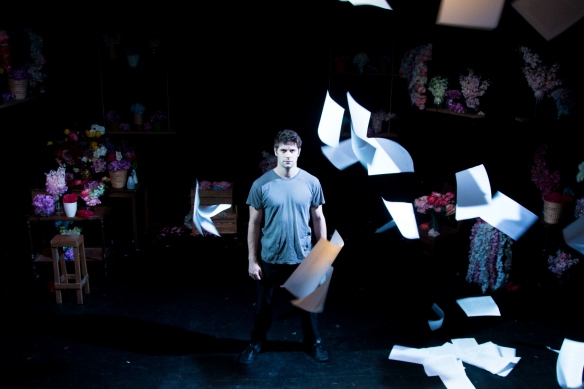 Ryan Johnson as the hapless Louis in 80 Minutes No Interval. Photo: Rupert Reid

As it says on the packet, 80 Minutes No Interval runs for 80 minutes without an interval – which would doubtless please Claire, the girlfriend of the play’s hapless anti-hero Louis, who has no great love of theatre, particularly of the lengthy, pretentious variety.

Written and directed by Travis Cotton, and produced by Thread Entertainment in association with Red Line Productions, 80 Minutes No Interval is a ripping black comedy, which turns a satirical gaze on subsidised theatre, theatre critics, publishing, perfectionism and cursed bad luck.

Louis (Ryan Johnson) has an unhappy knack of detonating pretty much everything he touches. An aspiring but so-far failed novelist, he is sacked from his job as a newspaper theatre critic when his editor comes across a small red box robot, which uses algorithms to write better reviews than any mere mortal. Later Louis purports to be making a decent living as a freelance theatre reviewer (which had theatre reviewers chortling).

The kind of diner who would try the patience of the most solicitous waiter, Louis’s restaurant proposal to long-suffering (and clucky) girlfriend Claire (Sheridan Harbridge) is memorable for all the wrong reasons. His parents want him out of their investment property and the publisher who shows an interest in his latest novel– as long as he changes it and wracks up an army of Twitter followers – may not have quite the eye he once had. From there, it just goes from bad to worse.

80 Minutes No Interval rocks along with many laughs on the way (though I didn’t find it as wildly funny as some of the audience around me who roared out loud for much of it). The scene in the restaurant as an OCD Louis tries to order is a gem and Harbridge delivers a monologue, which is comic gold, about all that is wrong with theatre from seven-hour shows with dinner breaks, to Perspex boxes, blue faces and a litany of other clichés (many seen on Sydney stages in recent years).

As for the scene between Louis and the ruthlessly commercial publisher Dan Kurtz (an outrageously funny, outsized turn by Robin Goldsworthy), it’s gross-out hilarious.

Cotton’s writing has a great deal of comic flair but after a while the play does feel a bit like an over-extended skit with loads of things thrown into the mix, not all of which are followed through or fully come together. However, the show is deftly directed and staged with a set design by Georgia Hopkins, which includes a lovely reveal.

Johnson is the perfect foil to all the comical carry-on, playing things straight with an endearing performance as Louis. The rest of the cast, which also includes Jacob Allan as the admirably restrained waiter and Julia Rorke as a young florist, let rip with performances that knock the comedy out of the park though at times it feels as if they are all doing their own thing rather than responding to what’s happening around them.

A nip and tuck wouldn’t go astray, but 80 Minutes No Interval is often wickedly funny with serious points to make, and clearly tickled many in Tuesday’s packed house.

80 Minutes No Intervals runs at the Old Fitz Theatre until April 9. Bookings: www.oldfitztheatre.com