First staged in New York in 2012 and then produced on Broadway last year, Disgraced is a well-made American play clearly crafted to debate certain issues but it feels urgent and timely prompting plenty of discussion in the foyer afterwards around its provocative themes.

Set now, Amir Kapoor (Sachin Joab) is a successful New York corporate lawyer who puts in the hard yards as he aims for promotion at the Jewish firm he works for. He has denounced his Islamic faith, describing the Koran as “one very long hate mail letter to humanity” and is somewhat vague about his background, saying his parents were born in India though the area they come from is now in Pakistan.

Happily married to Emily (Sophie Ross), an artist with a particular interest in Islamic art, and living in a swanky Upper East Side apartment, life looks pretty rosy.

But when Emily and Amir’s nephew Hussein (Shiv Palekar) – or Abe as he prefers to be known – push him to represent an imam imprisoned for raising funds for Hamas, the consequences are far-reaching.

Things start to come apart when Amir and Emily have a dinner party for Isaac (Glenn Hazeldine), a Jewish curator who is considering including Emily’s work in a major exhibition at the Whitney Museum, and his African-American wife Jory (Paula Arundell) who is a colleague of Amir’s at the law firm. 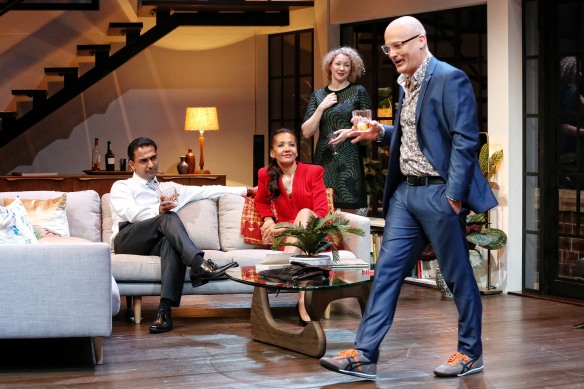 A dinner party is a well-worn dramatic device and naturally articulate arguments flow. But Akhtar has written well-rounded, believable characters and they are the kind of people who would have such passionate, intelligent, political debates, so it remains convincing even if you are aware of the dramatic set-up. What’s more, Aktar throws some provocative sentiments, sudden eruptions of drama and surprise twists into the mix that jolt and shock you.

Nothing is black and white as the play raises complex questions about identity, race, religion, prejudice, radicalisation and what it is to be a Muslim man living in the West. Amir may have turned his back on Islam but some of the views he has grown up with prove more difficult to dislodge.

Elizabeth Gadsby’s stunning design brilliantly evokes Amir and Emily’s swish apartment full of art and chic designer furniture, while Sarah Goodes’ superb direction gradually ratchets up the tension as she draws compelling performances from her excellent cast. Some have disliked the way she has the cast change the set but for me it worked fine; the way Amir slowly clears the dinner table is actually very poignant.

Joab has plenty of film and television credits but is making his stage debut as Amir– which surely says something about casting in this country – and gives an impressive performance moving believably from suave confidence to explosive behaviour that surprises even him and then a shattering sense of loss. The primal moan he emits when he realises the ramifications of all that has happened is harrowing.

Ross also colours her character’s emotional arc convincingly as she gradually realises what she has unwittingly triggered. Her interest in the history of Islam is conveyed with girlish enthusiasm initially and her pain and anger later in the piece feels very real.

Arundell brings plenty of sparky attack and zing to the piece as the smart, plain-speaking Jory, eliciting many laughs. Hazeldine finds the humour, passion and rather self-regarding arrogance in Isaac and Palekar makes a strong impression as Abe, whose attitude to his heritage changes through the course of the play.

Running a tight 90 minutes, Disgraced in a knotty play, engrossing play that raises plenty of pressing, topical questions and shows that there are no easy answers.