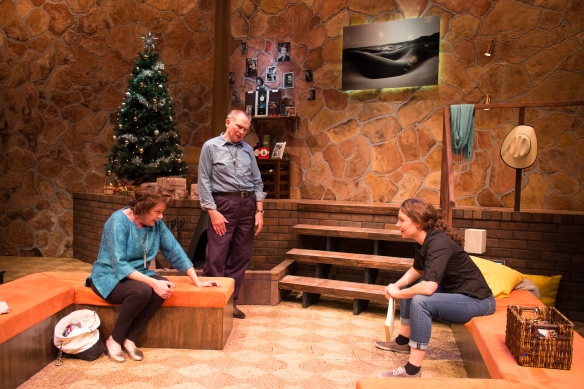 A Wyeth family reunion may not be quite as ferociously venomous as the Westons’ gathering in Tracy Letts’ blisteringly funny August: Osage County, but it ain’t far behind.

Other Desert Cities by American playwright Jon Robin Baitz – which was nominated for the 2012 Pulitzer Prize for Drama and the 2012 Tony Award for Best Play – pitches five members of the Wyeth family into a reunion from hell.

It’s Christmas Eve, 2004 in the Palm Springs home of proud Republican couple Lyman Wyeth (Ken Shorter) and his wife Polly (Deborah Kennedy). Lyman is a former Hollywood actor, known for his dramatic death scenes, who became a US ambassador. Polly used to be a Hollywood scriptwriter with her alcoholic sister Silda Grauman (Diana McLean), who is now living with them and trying Polly’s patience.

The Wyeth’s two left-leaning children Brook (Lisa Gormley) and Trip (Stephen Multari) arrive for the holidays. Trip is a reality television producer and fairly easy come, easy go. But the passionate Brook, who has struggled back from severe depression, comes bearing an explosive gift: the manuscript of a memoir in which she addresses the story of her brother Henry, a political activist who killed himself after being involved with a failed bombing.

The incident has already driven Lyman and Polly into their desert exile and Brook’s book is the last thing they want published.

Baitz’s vividly drawn characters are all fiercely articulate, and political and personal arguments fly but the play is so well written we never feel we are watching a staged debate.

Directing the play for the Ensemble Theatre, Mark Kilmurry helms a fine production that keeps you enthralled, wondering what on earth will come tumbling out of the closet, as the ground keeps shifting.

Kilmurry is well served by his cast. Kennedy is in her element as the redoubtable Polly who stands her ground no matter what, delivering the razor-sharp, witheringly witty lines with killer timing. Gormley captures Brook’s fragility and desperate need to hold onto her newly found sense of balance through the publication of her book, while McLean gradually reveals more layers to the wisecracking Silda. Shorter and Multari complete the taut ensemble with persuasive performances.

Ailsa Paterson’s set seems just a little too tastelessly ugly for such high-fliers though it works well on a practical level.

Other Desert Cities is a fairly conventional play, using a well-worn conceit, but it’s extremely well written and so well performed that it makes for a sizzling piece of theatre.

Other Desert Cities runs at the Ensemble Theatre until October 18. Bookings: www.ensemble.com.au or 02 9929 0644