It’s a big deal for Sydney Dance Company to have been granted the rights to William Forsythe’s Quintett. Only six companies in the world have been allowed to perform it – and SDC’s exhilarating performance shows why they are one of them.

Created by Forsythe in 1993 as a tribute to his wife, dancer Tracy-Kai Maier, who died of cancer at age 32 without being well enough to see it, Quintett is a contemporary classic for five dancers.

Choreographed to Gavin Bryars’ hypnotic Jesus’ Blood Never Failed Me Yet, it is performed on an open set with a spotlight pointed at a round mirror standing on stage.

Forsythe blends balletic and contemporary movements in constantly surprising combinations that take the breath away. Traditional ballet steps are deconstructed and twisted off their axis. The dancers whip and whirl around each other then fall, slide and crawl. Sharp, precise movements melt into organic shapes, with some playful floor work.

Quintett features alongside a new work for the full company by SDC artistic director Rafael Bonachela called Frame of Mind, which lends its name to the double bill. It too excites with the visceral thrill of extreme physicality, and is also one of Bonachela’s most moving pieces.

The work was inspired by the emotional turmoil Bonachela felt when his mother was hospitalised in Spain and he was unable to be with her. At the same time, he was without the support of his partner who was in New York.

Frame of Mind features a beautiful set design by Ralph Myers: a “memory room” with peeling walls and a large, grimy window, through which Ben Cisterne’s evocative lighting suggests the passing of time. Dancers occasionally gaze through the window, perch on the sill, or loll against the wall watching the surging movement of other performers. At times, the patterning on the wall seems to hint at a world map: far-flung places beyond the confines of the space. Myers also designed the all-black costumes.

Bonachela uses a wonderful, pulsing score by Bryce Dessner featuring three compositions written for the world-renowned Kronos Quartet. Matching the energy of the music, Frame of Mind comprises a series of solos, duets, trios, quartets and full ensembles where the movement coalesces into moments of powerful unison.

Frame of Mind is all about relationships: our need to love and be loved, to support one another and be supported. Highlights include a duet between Jesse Scales and Richard Cilli full of conflicting emotions in which they confront and comfort each other, and the concluding, emotionally-wracked solo by Eipper.

Frame of Mind runs at Sydney Theatre until March 21 then plays in Canberra, April 30-May 2 and Melbourne, May 6-16 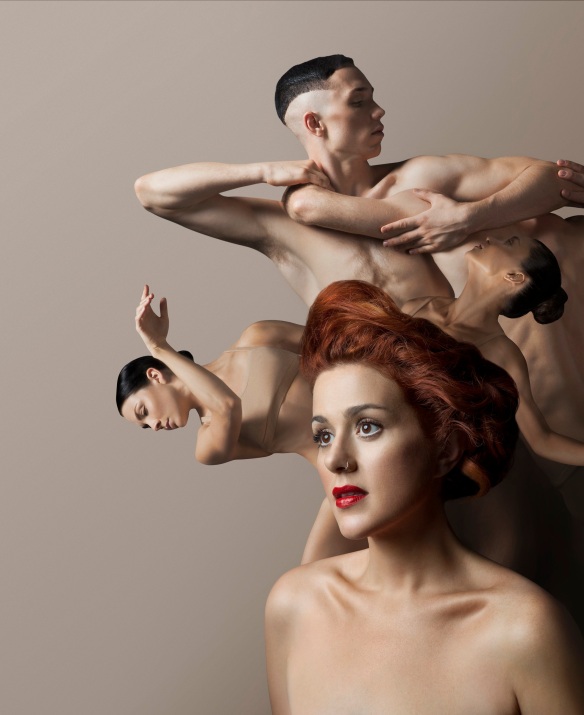 “She said she’d sung some of it and would love to sing all of it one day,” recalls Bonachela.

Bonachela – who had previously choreographed a work for London’s Ballet Rambert to another Britten song cycle, Serenade for Tenor, Horn and Strings – had a listen and loved it, but didn’t think too much more about it.

“Then, later, Katie reminded me, ‘do you realise that 2013 is the centenary of the birth of Britten so it would be a beautiful thing to do,’” he says. “And that’s how it happened. It was her suggestion.”

Bonachela talked to the Sydney Opera House and the project was earmarked for the Spring Dance Festival. The SOH subsequently canned Spring Dance but Les Illuminations survived.

And so, in what promises to be a sexy collaboration, eight dancers from Sydney Dance Company are joining forces with Noonan and 16 string players from the Sydney Symphony Orchestra to perform a 45-minute work choreographed by Bonachela to two of Britten’s compositions: Les Illuminations and his Simple Symphony.

They will perform on a T-shaped stage in the intimate space of the Sydney Opera House Studio with Noonan and the musicians along the top and the dancers on a catwalk jutting into the audience.

“Be ready for some sweat!” laughs Bonachela as he and Noonan joke about needing plastic covers for the audience similar to those used for the water-spraying Bath Boy in La Soireé.

Les Illuminations was first performed in 1940 when Britten was 27. In it he sets nine poems to music, chosen from a suite of 42 by French poet Arthur Rimbaud written between 1872 and 1873 when he was aged 19 to 20.

Rimbaud was having a torrid affair with another poet Paul Verlaine at the time with whom he was leading a wild life fuelled by absinthe and hashish.

Simple Symphony is a simpler, more playful piece, composed when Britten was 20 using parts of a piano score he wrote as a teenager.

“It’s a really innocent, lovely little piece that is often played by school students,” says Emma Jezek, SSO’s Assistant Principal Second Violin. “Les Illuminations is completely the opposite. (The poems) are wild when you read the text and the music is absolutely beautiful.”

Though Les Illuminations is challenging musically for the performers, Jezek, Bonachela and Noonan agree that it’s not difficult for audiences.

“I think it’s one of his most accessible works. They both are,” says Noonan. “We wanted to make it very inclusive so that someone who likes my music but who has never seen an orchestra or Sydney Dance Company will feel welcome.”

Noonan has loved Britten for as long as she can remember. “Mum (singer Maggie Noonan) sang a lot of Britten,” she says.

“I’m pretty sure that if I wasn’t in utero, I was a very young children when she did (Britten’s operas) Albert Herring and Peter Grimes. I sang in the chorus of the War Requiem when I was eight or nine, which is an incredible piece.

“I did some excerpts from Les Illuminations with the Australian Chamber Orchestra five years ago and I thought, ‘these are so beautiful,’” she says. “One of the poems has words along the lines of ‘I love you so much I have stretched garlands from window to window; golden chain from star to star, and I dance. I thought it’s made for it (a collaboration with SDC).”

“There are quite a lot of dance and movement references in the poems,” agrees Bonachela.

Bonachela – who celebrates five years as Artistic Director of SDC in November – is basing his choreography around duets, using two different sets of four dancers for the two compositions. He has enjoyed creating something intimate, after choreographing a series of large-scale works for the company.

“The limitation of the space have also been an exciting challenge,” he says. “I remember asking Anne Dunn, who was our Executive Director, ‘which is the front (of the stage)?’ and she said, ‘there’s no front.’ I said, ‘there must be a front’ and she said, ‘no, everywhere is the front,’” says Bonachela laughing. “It’s made me reconsider my future choreography, even when there is a front.”

Bonachela, Jezek and Noonan all agree that they find collaborations like this incredibly exciting.

“It’s fantastic doing crossover projects. It’s so exciting,” says Jezek. “They bring a different perspective to the work I suppose. I haven’t worked with Katie for a number of years but she has done projects with us before and it’s always fantastic. She’s so innovative and talented and incredibly fun to work with.”

“Collaboration is my main passion really,” says Noonan. “I’ve always loved working with people from different walks of life. I guess the way I approach my music is all about connectivity and connection. The genre doesn’t matter – classical, opera, jazz – as long as it comes from a good place and a place of integrity.

“But I love working with artists who are equally passionate in another vernacular. So I’ve worked with Bill Henson the photographer (and the contemporary circus group Circa) and with Raf in 2011 (on LANDforms), which was so beautiful. That is kind of my main passion now, moving forward: breaking down the boundaries between genres and different mediums.”

Bonachela is also thrilled at the chance to collaborate with Noonan and the SSO. “I could use some recorded music but the ultimate pleasure for me is to perform to live music, to give audiences that gift where there are 16 individual people making that sound, and Katie singing, and then these amazing bodies dancing. For me it cannot get any more ultimate.”

With a running time of just 45 minutes, there are two performances each night. Audiences who go to the earlier one can then hot foot it to the SOH’s Drama Theatre and catch a performance of ITMOI (in the mind of igor) – a celebration of Stravinsky by the wonderful British choreographer Akram Khan.

Les Illuminations plays at the Sydney Opera House Studio, this Wednesday to Saturday.