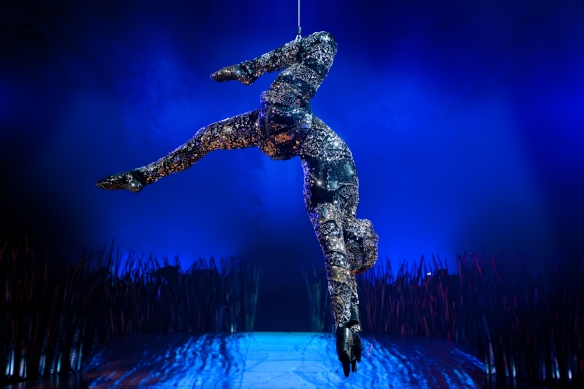 A regular visitor to our shores since 1999, Canada’s Cirque du Soleil has garnered a reputation for presenting awesomely skilled performers in super-slick productions that look spectacular but feel a bit soulless.

One of 19 Cirque du Soleil shows currently playing globally, Totem fits clearly into the company’s body of work, with all its trademark characteristics, but Lepage has managed to add some nice human touches to the show.

A fixed trapeze act by Guilhem Cauchois and Sarah Tessier becomes a delightful mid-air flirtation, for example. A routine on rings is given a humourous, beach twist by having competing, buffed male poseurs in bathers and sunnies being outshone by a bikini-clad woman.

Billed as a journey through human evolution, Totem begins with The Crystal Man descending from the pinnacle of the Big Top like a human mirror ball or glittering Spiderman “to spark life on earth” apparently. In a costume encrusted with 4,500 reflective pieces, it’s a dazzling opening.

Totem then travels across time from the swamp, where acrobats in amphibian costumes swing on a skeletal carapace, to cosmonauts in glow-in-the-dark Lycra fixing their gaze on Outer space. 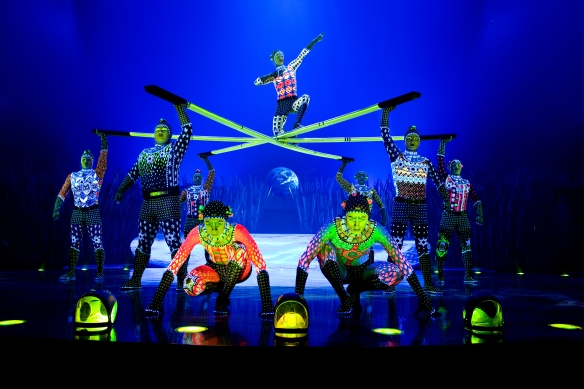 Along the way we encounter Native American hoop dancing by Eric Hernandez, a Darwin-like scientist spinning illuminated balls like orbiting planets around a giant transparent funnel, and a cute visual evocation of the ascent of man. But the evolutionary theme feels rather ad hoc, with some of the explanations in the program decidedly far-fetched.

The performance skills are amazing, however, and the show is beautifully staged, with shimmering projections and stunning costumes (designed by Australian Kym Barrett).

Highlights include five young Chinese women (Bai Xiangjie, Hao Yuting, He Xuedi, Wu Yurong and Yang Jie) on towering unicycles kicking bowls into the air and catching them on their heads and on each other’s. The foot juggling Crystal Ladies, identical twins Marina and Svetlana Tsodikova from Belarus who spin mats on their hands and feet, also dazzle.

As is often the case with Cirque du Soleil shows the clowns aren’t terribly funny though and the music has a wishy-washy ambient feel.

With several of the standout acts in the first half of the show, the second half is a slower burn but Totem ends on a high with the Russian Bars act in which acrobats bounce from springy planks to tumble through the air: a real cracker.

So, no great surprises if you’ve seen Cirque du Soleil before but still a highly entertaining show – which it would want to be for the ticket prices, which range from $59 to $345.

Totem is at the Entertainment Quarter until January 4. Bookings: wwww.cirquedusoleil.com It then plays in Melbourne from January 21, Brisbane from April 10, Adelaide from June 11 and Perth from July 31