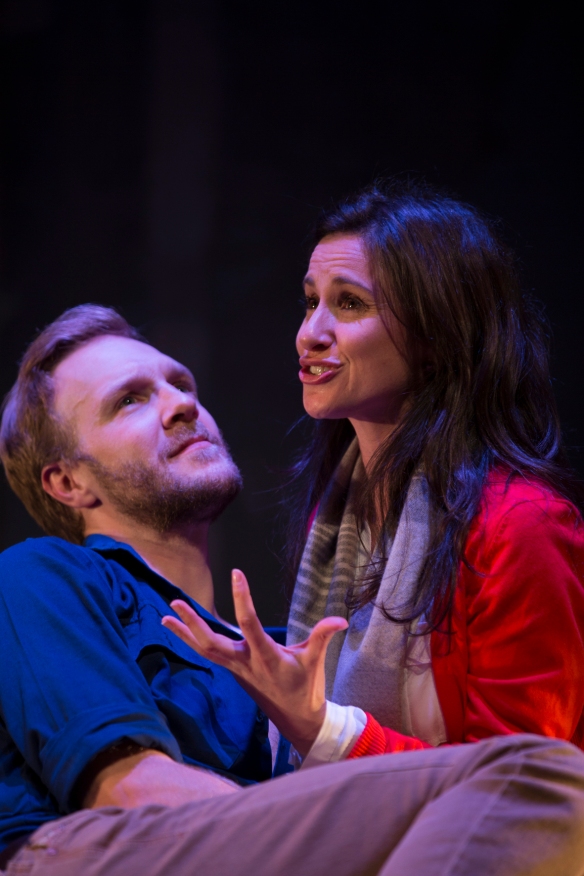 Written by British playwright Nick Payne when he was just 29, Constellations was rapturously received in the UK in 2012. In January, Jake Gyllenhaal stars in a Broadway production.

Grab the chance to see it here because it really is an ingeniously constructed, beautifully written two-hander – and this Darlinghurst Theatre Company production, directed by Anthony Skuse, more than does it justice.

Marianne (Emma Palmer) is a vivacious, voluble physicist interested in the “multiverse” theory. Roland (Sam O’Sullivan) is a laid-back beekeeper. They meet at a barbecue. She goes over to chat but he snubs her, saying he’s married. End of story. Or is it? The scene is then replayed again and again, each time with a slightly different outcome.

This pattern repeats throughout the play at different points in their relationship. But no matter how different possible outcomes we experience, they all end in imminent, untimely death.

Early on, Marianne says to Roland: “In the quantum multiverse, every choice, every decision you’ve ever made, and never made, exists in an unimaginably vast ensemble of parallel universes.”

Although Payne uses the idea of parallel universes for the play’s structure, he doesn’t actually explore the philosophical and scientific ideas around this in any depth. Instead, the play riffs on the idea of “what if?” and the way our lives could go in so many different directions depending on the little choices we make, the people we meet, when we meet them, and so on. Think Sliding Doors meets Groundhog Day (happening here and now in our world – or so it seemed to me).

Staged on Gez Xavier Mansfield’s wonderfully spare set, which opens up the theatre to its bare, beautiful walls, Skuse directs with great precision but lightness of touch giving the piece room to breathe while putting the focus firmly on the human dimension.

Both actors are superb, bringing untold nuance to numerous variations of similar lines (which must make it devilish hard to learn), while creating totally consistent, convincing characters. The way the play loops back on itself also means they frequently have to turn on a dime emotionally, ending one phase in deepest melancholy before returning to perky cheeriness seconds later.

Palmer has the added challenge of portraying Marianne’s developing aphasia (which affects language), which she does in heartbreaking fashion. What’s more, they both nail the English accents – and from two different regions, no less. (Praise to the vocal and dialect coach Linda Nicholls-Gidley).

The play runs a tight 80 minutes, which is the perfect length. Any longer and it could start to wear thin. Constellations may wear its scientific conceit very lightly but Skuse’s exquisite, moving production enthralls. Recommended.