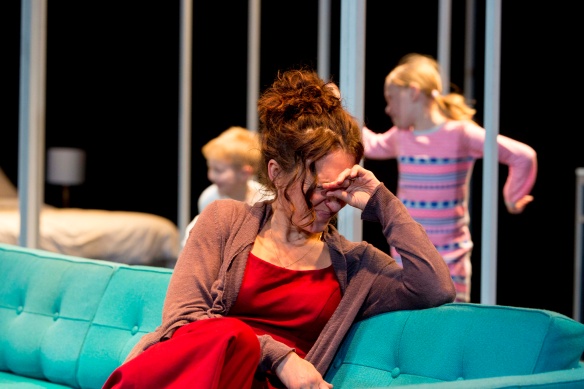 When Nora slammed the door behind her at the end of Ibsen’s 1879 drama A Doll’s House, her decision to leave her husband and children was so controversial that it sent shock waves around Europe.

The actor playing her in the German premiere refused to perform the ending and Ibsen was forced to rewrite it, with Nora deciding to stay because of her responsibility to her children. Eventually, of course, the original – and far more powerful – ending was restored.

We don’t know what happens to Ibsen’s Nora but we know how hard it will be for her in a patriarchal society without money, work experience or a family to turn to. Ibsen has already shown us this through the story of her widowed friend Kristine. Nora will have the added shame of leaving her family to contend with.

In Nora, co-adaptors Kit Brookman and Anne-Louise Sarks (who also directs the Belvoir production) ask what that decision would mean for a woman in Sydney in 2014, and follow her out of the door.

Since Nora’s decision doesn’t have the same shock value in this day and age, Brookman and Sarks have put a strong focus on her willingness to leave her children – something many would still struggle to understand today.

Act I is a very loose contemporary retelling of Ibsen’s play with Nora, her husband Torvald (here a corporate financier about to be promoted) and their two children, but none of the other characters.

The play opens with Nora (Blazey Best) lying next to her young son as he goes to sleep, while her daughter lies above them in the bunk bed. It is clear they have a close relationship and all the scenes between her and the children are touching, emphasising how desperately they will miss her.

Set designer Marg Horwell has put a skeletal white metal frame of the whole house on stage so that we are able to see into all the rooms at once. Nora seems to be suffering from severe depression, periodically extricating herself from her husband (Damien Ryan) and children (Toby Challenor and Indianna Gregg on opening night) as they tear around the house to gaze blankly out of the window or cry bitterly. In one scene, she dances frenetically, her despair further highlighted by her children joining in joyfully.

Where the tension in Ibsen’s play builds inexorably as Nora waits for Torvald to discover that she borrowed money from Krogstad by forging her father’s signature, the first act of Nora is a slow burn.

In Ibsen’s play, Torvald’s appalled and appalling reaction to Krogstad’s revelation sends Nora out of the door but there is no such dramatic flash point here. Torvald discovers she has opened a secret bank account and has been “squirreling” money away but though he is upset that she wasn’t honest with him, he seems to accept what she has done.

Instead, Nora appears worn down by Torvald’s well-meaning but patronising control of all she does. Her decision to leave has clearly been brewing for some time.

Act II takes place later on the night of her leaving. Nora has gone to the home of Helen (Linda Cropper), a woman she worked with some years ago but hardly knows to ask if she can stay for a few days while she finds her feet. Helen is bemused as to why Nora has chosen to go to her, while her own personal situation means she finds it incredibly hard to comprehend how Nora could leave her children.

Horwell has created a similar-style set for Helen’s smaller home. There are sightline issues, which I noticed more in Act II, with the steel frame bisecting the face of the actors quite regularly.

If Act I was a slow (but interesting) burn, then Act II falls rather flat. Essentially Nora articulates why she left. She “feels dead”, “my children cannot be a reason for being”, “I can’t live not knowing who I am” – all of which we have already inferred.

The two women sit in silence while they wait for a kettle to burn. We watch them slowly make a sofa bed. Playing this out silently in real time does ratchet up the awkwardness of the situation but it doesn’t make for great drama. What’s more, it’s pretty clear that Nora has no intention of returning home – at this point anyway – so there is little to keep us on the edge of our seats.

Sarks draws fine performances from her cast. Best gives a powerful portrayal of a listless, unhappy woman struggling with depression – though for some reason I didn’t feel a great deal for her emotionally, which I suspect is more to do with the play than Best, who is terrific. Ryan gives a wonderful character study of a man who loves and cares for his wife but is oblivious to the way he patronises and controls her. His priggish nature is more subtle than in Ibsen’s play but still in evidence.

His children seem to love him. The way his little boy runs into his arms is lovely and he is gentle with his daughter but the fact that he pushes them to practice golf putting when they don’t want to because it could be useful to them speaks reams.

Cropper is also excellent as Helen and the children are very convincing.

Nora follows Sport for Jove’s recent, beautifully wrought, period production of A Doll’s House, which really packed a punch dramatically in a way that Nora doesn’t manage to do. Nonetheless, it’s an interesting venture and the first act works well. However, having followed Nora through the door I’d have liked to have seen how she fared weeks, months or maybe years down the track. As it is, Act II just seems to articulate, in rather deadly fashion, what we pretty much already know and leaves it at that.