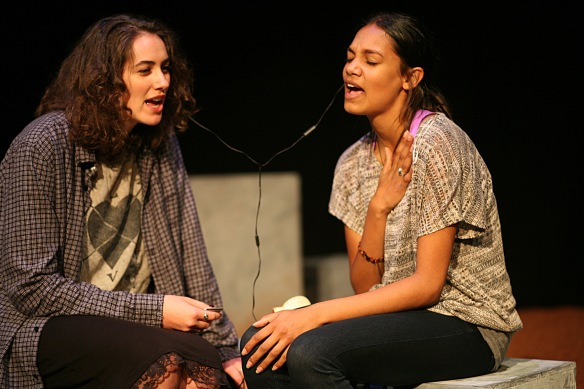 Sugarland is raw, tough, terribly painful, and some of the most moving theatre I have seen for a while.

A collaboration between Indigenous and non-Indigenous playwrights, directors and performers, it is, say co-directors David Page and Fraser Corfield in their program note: “about the meeting of different worlds, of different ideas.

“Sugarland touches on profound current themes like the safety of our children and the identity of regional communities in modern Australia. But ultimately, it’s about finding the universal truths that unite us, whatever your background, what your problems.”

The themes and ideas they refer to certainly ring out in a troubling, at times, harrowing, but ultimately hopeful piece of theatre.

Commissioned by ATYP in 2011, playwrights Rachael Coopes and Wayne Blair undertook a series of residencies with young people in the remote Top End town of Katherine. They delivered workshops and got the young people to talk to camera about their lives. The play they have written as a result of that experience really does hum with a sense of authenticity.

In Sugarland we meet a group of teenagers. Nina (Dubs Yunupingu) is a good student with a lovely singing voice but she needs somewhere safe to live. She’s been staying at her auntie’s in town so she’s close to school but the 22 stitches in the back of her head attest to why she is looking for her own place.

Erica (Elena Foreman) is an RAAF kid, always on the move with her family. Initially hostile and aloof, she gradually forges a relationship with the other kids, finding common ground with Nina through their shared love of music.

Jimmy (Hunter Page-Lochard), Nina’s cousin (“though not the way your mob means it”, as she tells Erica) is full of swagger but bleary-eyed from too much weed. A serial school truant, his father is dying, he owes money and his uncle will kill him if he finds out.

Aaron (Narek Arman), who arrived from Iraq as a refugee a few years earlier, is cheerful, friendly and the eternal joker, while Charles (Michael Cameron) keeps under the radar and for the most part goes with the flow.

A Sing Search competition at school, with a prize of $5000 and the chance to compete in a larger arena, could help the winner, while teacher Miss Penny (the writer Coopes) does all that she can to help the kids, but is all too often stymied by red tape.

Tackling themes of self-harm, domestic violence, drugs, truancy and systemic, bureaucratic failure, the play simmers with hurt, anger and pain. When the youngsters do lash out, it’s often at people they least want to harm.

Jacob Nash’s simple set – red earth, a few wooden boxes and a desk – makes for a flexible, effective setting, with lighting by Juz McGuire that heightens the ebb, flow and sudden surges of emotion.

Page and Corfield direct with great compassion but don’t shy away from the uglier aspects in a well-paced, nicely physicalised production that builds emotionally as you get to know the characters and the situations they are struggling with.

They have drawn powerful performances from all the cast that feel incredibly truthful. You share the teacher’s frustration, you hurt for the teenagers, and you want to sweep them all up in a huge embrace.

Running 80 minutes without interval, Sugarland doesn’t pull its punches, but it is not without humour or hope.

The play uses a framing story, told by Nina, of a boy who finds that the river has become murky and dirty. In his search for what is wrong, he discovers that the white and black communities on either side of it are contributing to the problem, with that one river infecting all the others.

Sugarland plays at the ATYP Studio until September 13. Bookings: wwwatyp.com.au