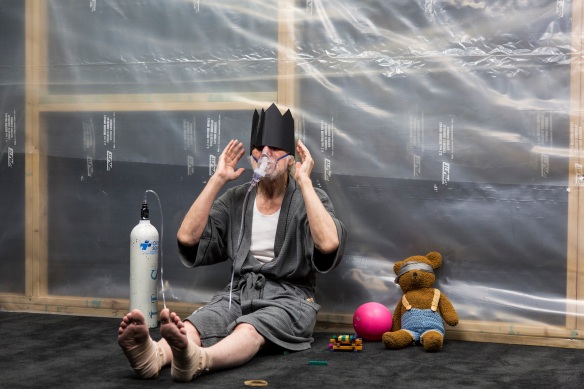 It begins in darkness. A couple of minutes tick past in a silent void. Some have found this initial blackout (with more to follow) uncomfortable and agonisingly long but I have to admit it didn’t feel that unsettling or threatening in the audience I sat with.

Then in a watery pale half-light we glimpse a frail old man in grimy-looking underwear and blindfold breathing noisily through an oxygen mask. The darkness returns and a barrage of cacophonous sound throbs through the theatre.

As the light comes and goes, he clambers onto the chair and strikes a series of agonised poses reminiscent of classical sculpture.

When the lights finally come up fully, a young woman enters with towels, a basin of water and a laundry bag of clothes. Stripping the old man she washes him in a bored, matter-of-fact way but not without tenderness. Then they play games to while away the time, games that he cannot hope to win.

This is Oedipus (Peter Carroll), now aged, almost senile and in exile, looking back in anguish on the terrible tragedy of his life: fated to murder his father, marry his mother and sire children that are his half-siblings. He has already gouged out his eyes. He lives in the kind of darkness the production periodically thrusts us into. Now his daughter/sister Antigone (Andrea Demetriades) is with him as he faces death.

Director Adena Jacobs describes her hour-long production – which references Sophocles’ plays Oedipus Rex and Oedipus at Colonus – as “a meditation on the myth of Oedipus Rex, and the notion of suffering itself. It is a poem. A code of symbols. A series of impressions that emerge from the darkness of the theatre. Tragedy cannot be represented. It can only be experienced through the senses,” she writes in the program notes.

It certainly helps to at least know the outline of Oedipus’s story, though there is a short section of text in which Carroll briefly articulates his tragedy, capturing through the poetry Oedipus’s once heroic status.

But for the most part, Jacobs uses loaded imagery. Are the games (which feel somewhat over-extended) a reference to human beings suffering as the playthings of the gods? Oedipus’s destiny was after all predicted before he was even born. The riddle of the sphinx was a kind of cruel game, as Antigone is at times here. Or is the game-playing merely a way of passing of the unendurably long days waiting for death?

One particularly striking image offers various possibilities around the theme of incest: perhaps a memory of the past or another twist in the present.

Max Lyandvert’s soundscape moves between rumbling electronic noise and glorious, lush early music that summons a sense of the epic, tragic grandeur of the myth – in complete contrast to the ugly, painful, squalid reality of what we see unfolding before us in this drab, carpeted room backed by a wall of timber frames and plastic sheeting (designed by Paul Jackson, who also did the lighting).

Somehow, though, as we ponder what each image might mean, we respond intellectually rather than viscerally. As with Jacobs’s recent production of Hedda (also for Belvoir) we are held at arm’s length emotionally.

Carroll gives a wonderful portrayal of a haunted man confused, possibly suffering dementia, consumed by suffering and the horror of what has been, yet still able to lash out in rage. The black contact lenses, which make dark holes of his eyes, lend a genuinely frightening touch to his haggard face. 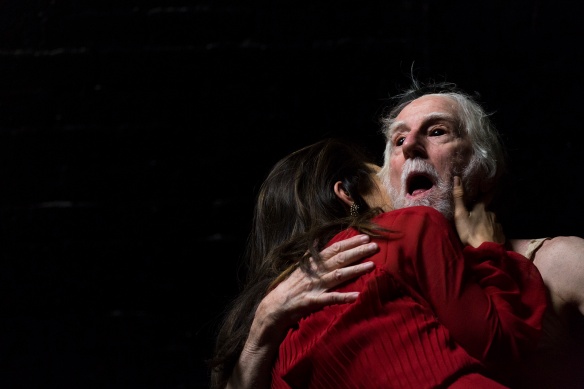 Demetriades is also impressive as Antigone, by turns caring, cruel and exasperated: a down-to-earth foil to the dramatic intensity of Carroll’s tortured performance.

It’s strange though, at the end of a piece that explores such a horrifying tale, for it to have had such little impact emotionally. It should be harrowing and full of pain. Instead I watched with cool detachment, admiring, pondering, wondering, yet not really emotionally involved.