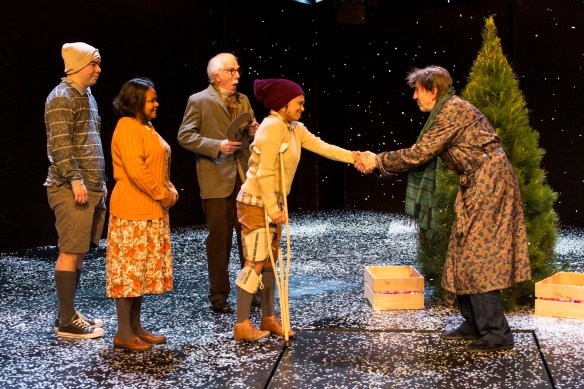 The magic begins as soon as you enter the theatre to find the seats dusted with (paper) snow. All over the theatre young and old excitedly lark around with it, dumping it on each other’s heads and tossing snowballs.

It’s the perfect start to Belvoir’s A Christmas Carol: a production so delightful and touching it would melt the hardest heart.

The costuming is contemporary (Mel Page) but the adaptation by director Anne-Louise Sarks and Benedict Hardie is a faithful telling of Charles Dickens’ timeless tale.

In this materialistic society of ours, the story of the miserly Scrooge resonates as powerfully as ever. Visited on Christmas Eve by the ghost of his former business partner Jacob Marley, followed by the Ghosts of Christmas Past, Present and Yet To Come, Scrooge learns to open his heart (and wallet).

The messages that although you can’t change your past, it’s never too late to change your ways, and that it’s more rewarding to give than to receive, are as beautiful and timely as ever.

The Belvoir stage has rarely looked larger than it does with Michael Hankin’s steeply raked black set. It’s a deceptively simple design with trap doors and a platform that rises and falls, brought to vivid life by Benjamin Cisterne’s dynamic lighting.

Sarks’ production doesn’t avoid the dark corners of the story but her production twinkles with joy and playfulness along with showers of snow and glitter, a human Christmas tree, and carol singers in wonderfully naff, knitted Christmas jumpers (think Mark Darcy in Bridget Jones’s Diary).

Robert Menzies is perfect as the mean-spirited, grouchy Scrooge, who starts the evening growling “Bah, humbug!” to any mention of Christmas and gradually thaws until he is gamboling in the snow making angel wings.

The other seven actors take on a number of roles each and work together as a tight ensemble. Steve Rodgers brings a beatific smile and deep humanity to the role of Bob Cratchitt, matched by Ursula Yovich as his kind-hearted but tougher, spirited wife. Together they are incredibly touching.

Miranda Tapsell’s radiantly glowing face could light the darkest night as Tiny Tim. Wearing a gorgeous confection-of-a-costume made from gold tinsel, Kate Box brings a deliciously mischievous exuberance to the Ghost of Christmas Present. Ivan Donato is a more solemn presence as the Ghost of Christmas Past in a shiny suit, Peter Carroll is hilariously, maniacally unhinged as Jacob Marley, while Eden Falk is decency and kindness personified as Scrooge’s nephew. 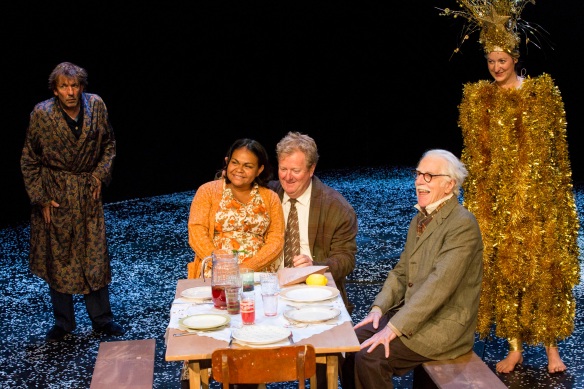 With music by Stefan Gregory and movement by Scott Witt, the heartwarming, family-friendly production (which runs 75 minutes) moves you to laughter and tears, sending you home filled with the spirit of Christmas.

In fact, I felt so uplifted that the next morning I booked tickets to take my family to see it just before Christmas. A real gift of a show.

A Christmas Carol is at Belvoir St Theatre until December 24. Bookings: www.belvoir.com.au or 9699 3444