In development off-and-on for 25 years, the musical Beyond Desire finally has its world premiere at the Hayes Theatre Co. It’s by no means an unqualified success but the music is lovely, with potential for further development of the show as a whole.

Written by Neil Rutherford (book and lyrics) and Kieran Drury (music), Beyond Desire is an Edwardian murder mystery inspired by Hamlet, with elements of E.M. Forster’s Maurice and a healthy dash of Upstairs Downstairs and Downton Abbey.

There’s also a cute Mousetrap-like coda in which the cast ask you – in song – not to reveal the mystery. To be honest, it’s fairly easy to guess what’s going on in the first act and though the show takes a few more surprising twists and turns in the second, not all are convincing.

Beyond Desire is essentially an entertainment: a melodrama lightly laced with serious themes including class and forbidden love.

Set in 1910, Anthony (Blake Bowden) is holidaying in Italy having just graduated from university when he receives a telegram from his mother Louise (Chloe Dallimore). His father Edward (Phillip Lowe) has been found dead in a London hotel room. 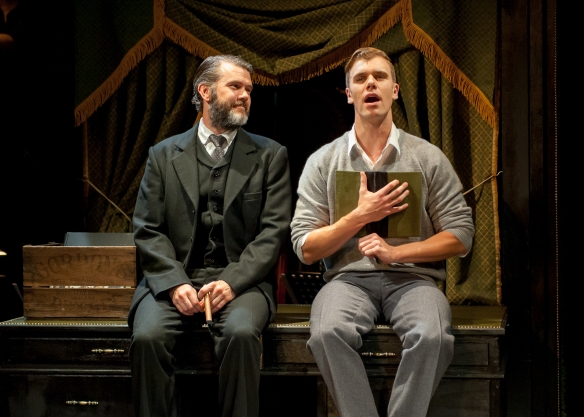 Together with his university friend James (Ross Hannaford) – who has arrived at the behest of Louise – the melancholic, angry Anthony sets out to discover what really happened.

Making up the household are the housekeeper Mrs Milson (Nancye Hayes) who makes sure she knows everyone’s business, her daughter Emily (Christy Sullivan) who is a maid, and a manservant Syd (David Bulters).

The music, which combines an Edwardian feel with contemporary resonances (Sondheim, Wildhorn, Schonberg & Boublil), is beautiful and emotive. The arrangements for piano, violin, cello, harp, clarinet and horn are lush and sensitively performed by the six-piece band led by musical director Peter Rutherford.

The lyrics, however, are uneven, verging on workmanlike at times, rarely revealing psychological depth. For the most part, the characters sing about the situation they’re in, without adding a great deal more to what we already know.

A poignant duet between Emily and James about their respective love for Anthony is one of the exceptions and a highlight.

Having chosen to present an Edwardian melodrama, Rutherford could have had more fun with the genre and also sharpened the book to build more tension in a show that revolves around deception and secrets. Instead, it’s a bit of an uneasy mix, with audiences not quite sure at times whether they are meant to be laughing or taking it all very seriously.

Rutherford also directs. In fact, his hand is all over the production. Take a good look at the names of the set designer (Luther Forinder) and orchestrator (Leon Ferrithurd).

The costuming is excellent (presumably borrowed as there is no costume design credit). The set isn’t wildly attractive but it works OK in the small space, quickly reforming into various configurations for different settings – though with the band sitting behind, it does all look rather cramped. The lighting meanwhile (Nicholas Rayment) is somewhat heavy-handed.

The production boasts impressive performances from the entire cast. The singing is terrific – though the sound is over-amplified. And the underscoring is sometimes distracting, making it difficult to hear dialogue.

Hayes is outstanding as Mrs Milson, understanding the melodrama style instinctively and bringing just the right amount of tongue-in-cheek fun to her portrayal. It’s a hugely enjoyable, precisely judged comic performance – and a delight to see her making her debut in the theatre that has been named in her honour. 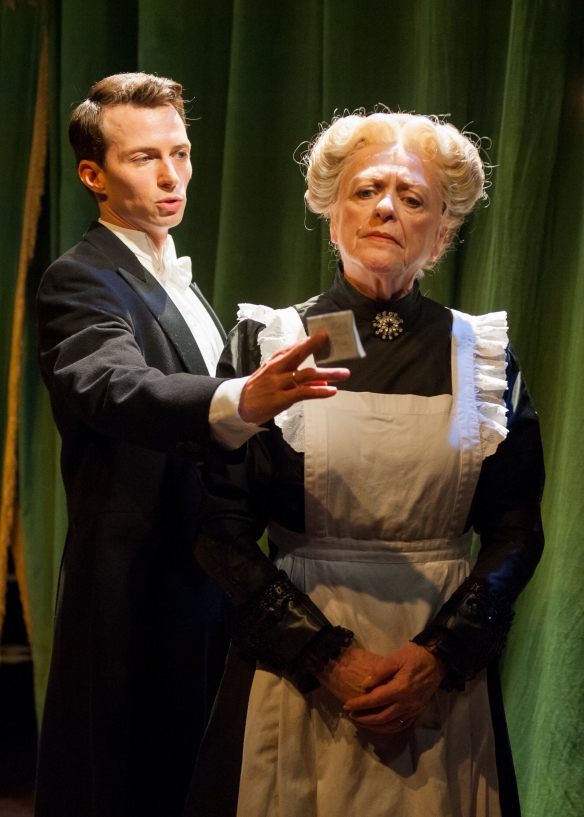 She is matched by a winning performance from Sullivan as the young maid Emily, which feels truthful and heartfelt (accent and all), while Bowden is in glorious voice as Anthony. But all the cast have their moments.

Despite the flaws, I still found the show entertaining. It’s refreshing to be taken into a different kind of musical world to the ones we have been seeing on our stages of late. The tone could do with finessing and some tightening would sharpen it (it runs around two hours and 45 minutes including interval) but there is potential for further work.

The theatre program, presented as a 1910 London newspaper, is a nice little touch.

Beyond Desire runs at the Hayes Theatre Co until December 14. Bookings: www.hayestheatre.com.au or 8065 7337