Samantha Dodemaide and the cast of Violet. Photo: Grant Leslie

Violet is a lovely little musical with a gentle charm that gets under the skin. Before you know it, you’ve been knocked for six.

Written by composer Jeanine Tesori (who won Best Musical and Best Original Score for Fun Home at this year’s Tony Awards) and writer Brian Crawley, it is based on a short story by Doris Bett called The Ugliest Pilgrim.

The show premiered off-Broadway in 1997 and had a short season on Broadway last year with Sutton Foster as Violet. But it couldn’t have been given a more loving production than it gets here, produced by Blue Saint Productions in association with the Hayes, and directed by Mitchell Butel.

Set in 1964, Violet tells the story of a young woman (Samantha Dodemaide) who takes a Greyhound bus from North Carolina to Oklahoma, hoping that a televangelist can heal a disfiguring scar on her face, gained 12 years earlier when the blade flew from her father’s axe.

En route, she meets two soldiers – the cocky Monty (Steve Danielsen) and the kindly Flick (Barry Conrad) who as an African American understands what it’s like to be a misfit. The two buddies take her under their wing and fall for her.

Tesori’s music includes gospel, country, blues, soul, folk as well as ballads and soaring anthems in a more traditional musical theatre style. It’s a gorgeous score, with the songs emerging organically from the story and the characters.

Butel makes a very impressive directorial debut. For starters, his casting is excellent and he draws clearly delineated, truthful performances from the actors. He keeps the action moving fluidly at a perfect pace, and he knows exactly how to put the focus where it needs to be.

Simon Greer’s non-naturalistic set is a clever, evocative space, which Butel uses extremely well, with great support from the rest of the creative team (lighting by Ross Graham, costumes by Lucetta Stapleton and choreography by Amy Campbell). 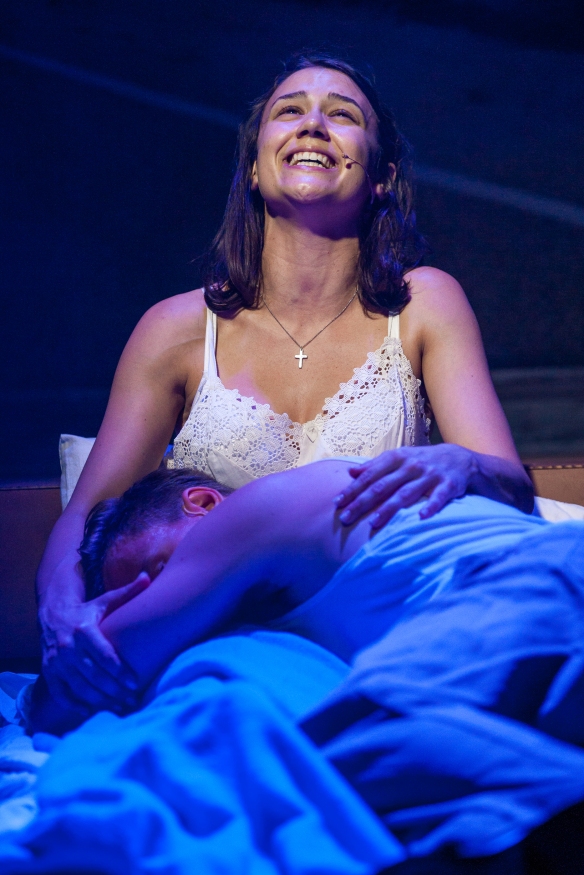 With her expressive face and voice, Dodemaide gives a radiant performance as Violet, capturing her prickly exterior and inner vulnerability. She manages to make the character’s deluded naivety believable and has a lovely, shy smile that lights up the stage.

Luisa Scrofani and Damien Bermingham are moving in flashback scenes between the young Violet and her father. Danielsen and Conrad give warm, appealing, believable performances as Monty and Flick, Dash Kruck nails the charlatan preacher, while Genevieve Lemon is a scene-stealer as an old Lady on the bus and a Memphis lady of the night.

The rest of the ensemble – Katie Elle Reeve, Linden Furnell, Ryan Gonzalez and Elenoa Rokobaro – all play their part beautifully and between them unleash some powerhouse vocals, while Musical Director Lucy Bermingham leads a tight six-piece band.

The lyrics in the opening number are a little hard to hear with everyone singing so loudly, but after that the sound (sound design by Jeremy Silver) is as good as I’ve heard it at the Hayes.

Violet is a simple, optimistic piece about self-acceptance and forgiveness. The ending won’t surprise but it touches the heart without being sentimental or corny.