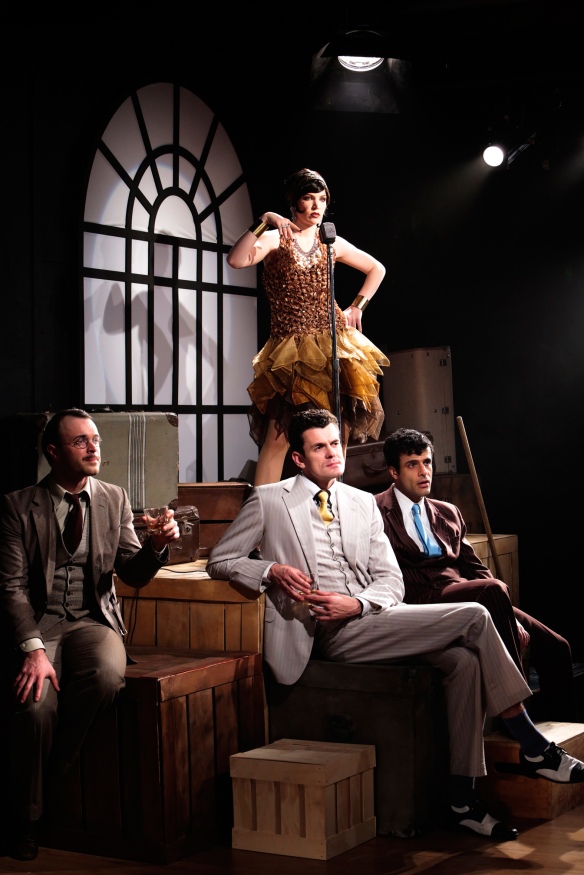 You have to applaud Toby Schmitz for the ambition behind his new play Empire: Terror on the High Seas. But it still has a way to go before that ambition is realised on stage.

Set in 1925 on board a cruise liner called the Empress of Australia, headed for New York, we meet a group of first class passengers: the dandyish Richard (Dick) Civil-Lowe Cavendish (Nathan Lovejoy) who managed to avoid service in World War I, a brash South African called Anthony Hertz-Hollingsworth (Anthony Gee) and his new wife Nicole (Ella Scott Lynch), a London flapper and party-girl with a taste for cocaine, and a gangster-like Chicago businessman called Jacob ‘Bang’ Reiby (Fayssal Bazzi) who works for emerging company IBM.

There’s also Mr Frey (Anthony Gooley), a bookish, Australian poet who fought in the war and has been seduced by Dadaism, who has been invited onto the upper decks as a guest, a bigoted priest (James Lugton), a cabaret singer (Billie Rose Prichard) and a plodding detective (Duncan Fellows), among others.

It’s not long before we discover there is a serial killer on board. The first victims are Bengali ship stewards but the murders quickly escalate, becoming ever more grisly, so that no one is safe.

In a story by Elissa Blake in the Sydney Morning Herald (http://www.smh.com.au/entertainment/theatre/sailing-into-the-darkness-20130829-2srew.html) Schmitz said that “the set-up is deliberately Agatha Christie” but that the ship is actually a metaphor for “a nation adrift” and a way to examine Australia’s post-colonial history.

In the theatre program Schmitz references the British Empire Exhibition of 1924 (also alluded to in the play), which showcased the various nations in the Empire, while director Leland Kean writes: “As a nation, Australians find it extremely hard to face the fact that in the name of bettering the world we live in, we did some terrible things. That our ancestors committed atrocities in the name of race is something we still struggle to comprehend, and admit. Likewise it is also extremely hard to imagine the world they lived in, as it was when these atrocities occurred. This play bravely attempts to take us to this horror.”

I must confess that had I not read the story and program notes I wouldn’t have realised that this was Schmitz’s aim. Though the characters talk and talk, voicing views about the Empire, race, class, war and history, the play doesn’t cohere dramatically.

I found myself straining to follow what was being said. A lot of it is smart and amusing, with Noel Coward-like witticisms, but there is just so much of it that it’s an uncomfortable experience as you struggle to pull it all together and shape it in your mind.

There is a somewhat Stoppardian feel about it. Schmitz is, of course, starring in Tom Stoppard’s Rosencrantz and Guildenstern Are Dead for Sydney Theatre Company at the moment. But where Rosencrantz and Guildenstern is also dense and rewards close listening, Stoppard allows you to relax, follow what is being said and enjoy it. Empire has you straining so hard it’s exhausting. Gee’s aggressively loud turn as Hertz-Hollingsworth coupled with a frequently indecipherable South African accent doesn’t help.

There’s little tension along the whodunit lines; it’s obvious fairly early on who the killer is and the perpetrator is revealed in Act I – though the other characters remain in the dark. Why the killer is driven to murder so indiscriminately and voraciously isn’t entirely clear. Post-traumatic stress as a result of war? Or were they already a psychopath? As for the mix of styles, the play never convincingly moves beyond the nod to Coward and Christie to something genuinely horrific.

There has been publicity about the gothic horror being similar to something from the Saw films but don’t believe it. It’s hard to put fake intestines on stage and make it look believable. I’m incredibly squeamish but the gory scenes come across as comical in a gross-out way rather than stomach churning.

Staging a play this big – with a cast of 15 – is just as ambitious on the part of Rock Surfers Theatre Company. Kean runs a fairly tight ship in his staging.  James Browne’s handsome set with wooden crates, suitcases and a chintzy looking cabin is effective and his costumes are stylish.

The performances are generally good. Lovejoy is particularly impressive as the “pansexual” Cavendish, tossing off witticisms with just the right level of breezy, self-satisfied affectation, his comic timing immaculate as the words trip effortlessly off his tongue.

But in the end it just doesn’t come together. Running three hours including interval, Empire feels long and underdeveloped.

Schmitz is an exciting writer. His play Capture the Flag about the Hitler Youth movement is a little gem and his recent work I Want to Sleep With Tom Stoppard (also directed by Kean) is an entertaining, intelligent comedy.

Empire is commendably ambitious. All too rarely these days so we see work of this scale.  But the play needs further work for the themes and big ideas in it to emerge more strongly.

Empire plays at the Bondi Pavilion until September 28

A big hit in Melbourne, where it played at La Mama and then the Melbourne International Comedy Festival, Tamarama Rock Surfers is now presenting the sci-fi comedy Robots vs Art in Sydney.

Written and directed by Travis Cotton, the play is set in the not-too-distant future, where robots have taken over the earth, annihilating most of the humans before they destroy the (now-sustainable) planet.

The few surviving people labour in zinc mines, while the robots live in art galleries – though they’ve removed the art.

Then Executive Master Bot (Simon Maiden) begins to wonder about this thing called Art. He writes a play to performed by robots and drags Giles (Daniel Frederiksen) – a former playwright and director – from the mines to direct it for him.

When that is successful, Executive Bot wants more and challenges Giles – now the only human left – to stage a play, which will make him feel human emotion. If Giles is successful he will not only live but be able to procreate with a Fembot. If not, he dies.

It’s a lovely conceit that combines sci-fi and environmental themes with questions about art – what is it? And what is its value?

The writing is full of sparkling one-liners with many theatrical in-jokes, which will appeal to an industry audience in particular, but which are funny enough to have a general audience laughing too.

The production meanwhile is decidedly lo-fi with a no-frills set and costuming – but the tight direction and acting make up for it.

Maiden, along with Natasha Jacobs who plays a Fembot and Paul David Goddard, who plays Claw Bot and Soldier Bot, give wonderfully comic performances using a very funny, robotic physicality and delivering the smart dialogue in a suitably flat, mechanical-like intonation.

Maiden cleverly conveys Executive Bot’s growing sense of human emotion, gradually transforming into as arty an entrepreneur as a bot could be. The glimpse of a smile that Jacobs gives as her Fembot seems to start to change a little during rehearsals is also beautifully, subtly done.

Frederiksen, meanwhile, is engaging and sympathetic as Giles, who was only ever a middling playwright and even less successful director and who now has the unenviable, hilarious, frustrating task of coaxing believable performances from the bots.

Robots vs Art isn’t the most profound play but it’s a great deal of fun with serious themes and a surprise, snappy ending. Well worth a look.

An edited version of this review ran in the Sunday Telegraph on June 30.