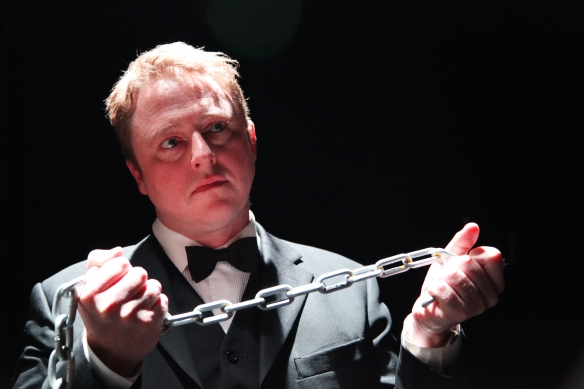 A big hit in Melbourne, where it played at La Mama and then the Melbourne International Comedy Festival, Tamarama Rock Surfers is now presenting the sci-fi comedy Robots vs Art in Sydney.

Written and directed by Travis Cotton, the play is set in the not-too-distant future, where robots have taken over the earth, annihilating most of the humans before they destroy the (now-sustainable) planet.

The few surviving people labour in zinc mines, while the robots live in art galleries – though they’ve removed the art.

Then Executive Master Bot (Simon Maiden) begins to wonder about this thing called Art. He writes a play to performed by robots and drags Giles (Daniel Frederiksen) – a former playwright and director – from the mines to direct it for him.

When that is successful, Executive Bot wants more and challenges Giles – now the only human left – to stage a play, which will make him feel human emotion. If Giles is successful he will not only live but be able to procreate with a Fembot. If not, he dies.

It’s a lovely conceit that combines sci-fi and environmental themes with questions about art – what is it? And what is its value?

The writing is full of sparkling one-liners with many theatrical in-jokes, which will appeal to an industry audience in particular, but which are funny enough to have a general audience laughing too.

The production meanwhile is decidedly lo-fi with a no-frills set and costuming – but the tight direction and acting make up for it.

Maiden, along with Natasha Jacobs who plays a Fembot and Paul David Goddard, who plays Claw Bot and Soldier Bot, give wonderfully comic performances using a very funny, robotic physicality and delivering the smart dialogue in a suitably flat, mechanical-like intonation.

Maiden cleverly conveys Executive Bot’s growing sense of human emotion, gradually transforming into as arty an entrepreneur as a bot could be. The glimpse of a smile that Jacobs gives as her Fembot seems to start to change a little during rehearsals is also beautifully, subtly done.

Frederiksen, meanwhile, is engaging and sympathetic as Giles, who was only ever a middling playwright and even less successful director and who now has the unenviable, hilarious, frustrating task of coaxing believable performances from the bots.

Robots vs Art isn’t the most profound play but it’s a great deal of fun with serious themes and a surprise, snappy ending. Well worth a look.

An edited version of this review ran in the Sunday Telegraph on June 30.