Even if you know nothing about Arthur Miller’s classic play All My Sons, the foreboding set for Kip Williams’ shattering Sydney Theatre Company production tells you immediately that all is not well.

Instead of the usual naturalistic backyard, designer Alice Babidge sets the action in a black box with a flat cut-out of the Keller family home. The blank façade gives little away though you can see art on the walls through the windows. Later, the set will be used to echo the revealing of secrets, as lies that lurk at the heart of the play are laid bare.

In the brighter opening scenes, the darkness of the set does rather undercut Miller’s initial depiction of a happy family apparently living the American Dream. But as the play unfolds, the setting adds to the feeling of something rotten behind closed doors.

The stark staging throws a laser focus on Miller’s beautiful writing and on the exceptional performances, which stand out in sharp relief against the dark, oppressive backdrop, while Babidge’s costuming anchors the play in its period. The production is eloquently lit by Nick Schlieper while Max Lyandvert’s music subtly underscores the building of tension.

Set in 1946, wealthy factory owner Joe Keller (John Howard) was exonerated for knowingly supplying faulty aircraft parts during the war but his business partner Steve, who took the rap, is still in jail. Meanwhile, Joe’s wife Kate clings to the hope that her son Larry, a fighter pilot missing in action for three years, will return home.

Their other son Chris (Chris Ryan) has invited Ann Deever (Eryn Jean Norvill) home and Kate and Joe are on edge. Ann is Steve’s daughter and Larry’s former girlfriend. When Chris announces that he wants to marry her, a tragedy is set in motion.

Williams directs with a searing clarity, beautifully served by a cast who are able to reach deep into the emotions gnawing at the characters from within. Nevin is heart-breaking as Kate. She looks so tiny and fragile, wracked by an anguish she is too scared to acknowledge, yet she can still muster a sharp humour and a desperate cheerfulness.

In a wonderfully measured performance, Howard’s Joe is big and bluff with a geniality tempered by something guarded, while his sudden bursts of anger are quickly suppressed. Ryan radiates determined optimism as the idealistic, clean-cut Chris yet manages in little ways to suggest that he hasn’t completely recovered from the war. Hit hard by the truth, we watch Chris snap as his world falls apart. Norvill’s stylish Ann seems delicate yet stands her ground with surprising strength as she clings to the possibility of love.

As Ann’s avenging brother George, Josh McConville arrives (in crumpled suit) with a blast of energy.  His body is tight-wired and physically wracked as he struggles with a whirlpool of emotions: rage, guilt and long-standing love for the Kellers.

In supporting roles as the Keller’s neighbours –  Bert LaBonte as Jim, a world-weary, unhappily married doctor, Anita Hegh as his rather sour, nagging wife Sue, John Leary as the over-chatty handy-man Frank who is doing Larry’s horoscope for Kate, and Contessa Treffone as Frank’s sunny wife Lydia – the rest of the cast deliver well observed performances.

Telling a story of cowardice, denial and profit at others’ expense, All My Sons still resonates as powerfully as ever. Beautifully structured as it moves inexorably to its terrible conclusion, I felt as if I had been holding my breath for ten minutes or more by the play’s end, almost as emotionally drained as the actors.

All My Sons runs at the Roslyn Packer Theatre until July 9. Bookings: www.sydneytheatre.com.au or 02 9250 1777 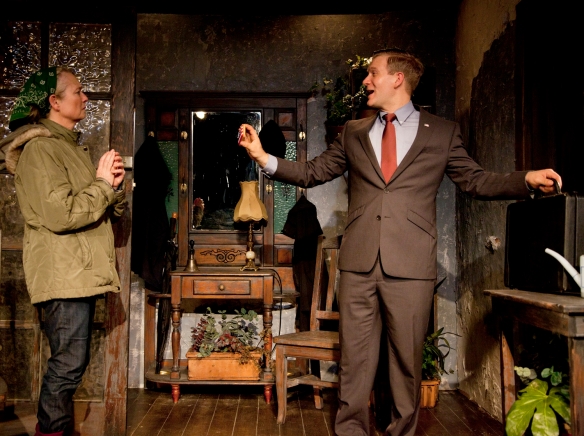 Rodney Fisher has worked a small miracle at the Old Fitzroy Theatre with the highly naturalistic set that he has managed to install in the tiny space for his production of Sam Shepard’s The God of Hell, which he both directs and designs.

The old-fashioned, wooden-panelled Wisconsin farmhouse that he depicts in great detail – down to the smell of real bacon frying on the stove – creates a believably ordinary world in which Shepard’s surreal black comedy can suddenly explode.

The play is set on a remote, dairy farm where Frank (Tony Poli) and his wife Emma (Vanessa Downing) still have heifers, unlike most of their neighbours who have been paid by the government not to farm.

The day begins slowly like any other. Frank sits polishing his boots, while Emma waters the plants even though the constant sound of dripping suggests watering is the last thing they need.

But today is different. A man called Haynes (Jake Lyall) – the son of an old friend of Frank’s – is hiding in the basement, having arrived terrified. He is clearly on the run, though Frank doesn’t seem too perturbed. What’s more he emits flashes of lightning whenever anyone touches him, which, as Emma says, isn’t normal.

When Frank goes off to attend his heifers, there is a knock at the door and a suited man appears brandishing a cookie with stars-and-stripes icing as if it were a business card, or something more sinister.

The pushy, over-cheery Welch (Ben McIvor) is ostensibly there to sell patriotic paraphernalia but it’s not long before he is grilling Emma about how many rooms there are in the house and whether there is anyone in the basement.

From naturalistic beginnings, the play slides into something more bizarre, with Shepard throwing satire, black comedy, absurdity, farce and elements of a psychological thriller into the mix.

The God of Hell isn’t the subtlest play, wearing its politics on its sleeve, but it burns with a fiery anger. Written in 2004, Shepard depicts old-time America being ruthlessly overtaken by a new world where not flying the American flag outside your home is tantamount to being unpatriotic; a world where democracy is to be protected at all costs and the war of terror is in danger of turning on its own. It may be set in America but its themes chime here too.

Produced by MopHead Productions in association with Sydney Independent Theatre Company (SITCO), Fisher helms an impressive production, proving once more what a terrific (and strangely under-used) director he is. 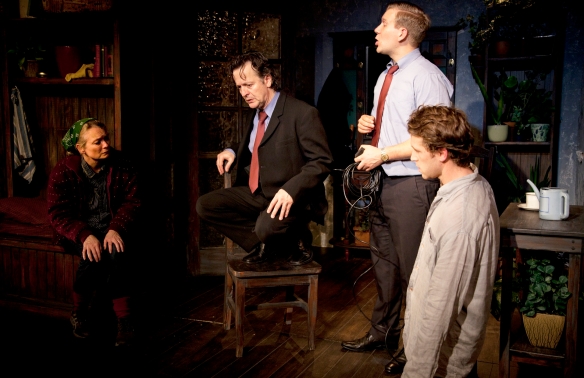 Downing gives a quietly compelling performance as Emma, who may be a rustic innocent, out of touch with the world, but is no fool or pushover. She and Poli speak with a more languid rhythm than the other two, but you see her resolve building in the face of Welch’s bullying, while Poli convinces as a decent man so naïvely set in his ways, he is a sitting target.

McIvor combines a grating, smarmy bonhomie with something more menacing, while Lyall is believably coming apart at the seams.

Running 90 minutes without interval, The God of Hell is a terrific production of a punchy, provocative play and well worth a look.

It begins in darkness. A couple of minutes tick past in a silent void. Some have found this initial blackout (with more to follow) uncomfortable and agonisingly long but I have to admit it didn’t feel that unsettling or threatening in the audience I sat with.

Then in a watery pale half-light we glimpse a frail old man in grimy-looking underwear and blindfold breathing noisily through an oxygen mask. The darkness returns and a barrage of cacophonous sound throbs through the theatre.

As the light comes and goes, he clambers onto the chair and strikes a series of agonised poses reminiscent of classical sculpture.

When the lights finally come up fully, a young woman enters with towels, a basin of water and a laundry bag of clothes. Stripping the old man she washes him in a bored, matter-of-fact way but not without tenderness. Then they play games to while away the time, games that he cannot hope to win.

This is Oedipus (Peter Carroll), now aged, almost senile and in exile, looking back in anguish on the terrible tragedy of his life: fated to murder his father, marry his mother and sire children that are his half-siblings. He has already gouged out his eyes. He lives in the kind of darkness the production periodically thrusts us into. Now his daughter/sister Antigone (Andrea Demetriades) is with him as he faces death.

Director Adena Jacobs describes her hour-long production – which references Sophocles’ plays Oedipus Rex and Oedipus at Colonus – as “a meditation on the myth of Oedipus Rex, and the notion of suffering itself. It is a poem. A code of symbols. A series of impressions that emerge from the darkness of the theatre. Tragedy cannot be represented. It can only be experienced through the senses,” she writes in the program notes.

It certainly helps to at least know the outline of Oedipus’s story, though there is a short section of text in which Carroll briefly articulates his tragedy, capturing through the poetry Oedipus’s once heroic status.

But for the most part, Jacobs uses loaded imagery. Are the games (which feel somewhat over-extended) a reference to human beings suffering as the playthings of the gods? Oedipus’s destiny was after all predicted before he was even born. The riddle of the sphinx was a kind of cruel game, as Antigone is at times here. Or is the game-playing merely a way of passing of the unendurably long days waiting for death?

One particularly striking image offers various possibilities around the theme of incest: perhaps a memory of the past or another twist in the present.

Max Lyandvert’s soundscape moves between rumbling electronic noise and glorious, lush early music that summons a sense of the epic, tragic grandeur of the myth – in complete contrast to the ugly, painful, squalid reality of what we see unfolding before us in this drab, carpeted room backed by a wall of timber frames and plastic sheeting (designed by Paul Jackson, who also did the lighting).

Somehow, though, as we ponder what each image might mean, we respond intellectually rather than viscerally. As with Jacobs’s recent production of Hedda (also for Belvoir) we are held at arm’s length emotionally.

Carroll gives a wonderful portrayal of a haunted man confused, possibly suffering dementia, consumed by suffering and the horror of what has been, yet still able to lash out in rage. The black contact lenses, which make dark holes of his eyes, lend a genuinely frightening touch to his haggard face.

Demetriades is also impressive as Antigone, by turns caring, cruel and exasperated: a down-to-earth foil to the dramatic intensity of Carroll’s tortured performance.

It’s strange though, at the end of a piece that explores such a horrifying tale, for it to have had such little impact emotionally. It should be harrowing and full of pain. Instead I watched with cool detachment, admiring, pondering, wondering, yet not really emotionally involved.