Based on the hugely popular 1990 film starring Demi Moore and Patrick Swayze, Ghost the Musical has a lot to live up to – but happily it has been translated to the stage with plenty of whiz-bang flair. It’s certainly not the greatest musical ever written but it’s great entertainment.

Adapting his own Academy Award-winning screenplay, Bruce Joel Rubin sticks fairly faithfully to the film with a few minor changes to the supernatural love story-cum-thriller.

High-flying banker Sam Wheat (Rob Mills) and his sculptor girlfriend Molly Jensen (Jemma Rix) have just moved into their dream loft apartment in Brooklyn. Returning home from a romantic dinner, Sam is killed in a street mugging but finds himself trapped between this world and the next as he tries to save Molly from mortal danger.

Directed by Matthew Warchus (Matilda the Musical), the production creates a tangible sense of the gritty New York world where the story is set. The show has a cinematic feel, not just in its use of Jon Driscoll’s dynamic video projections – which help establish the different locations and support a number of the illusions including the subway scene – but in the way Warchus keeps the action flowing swiftly and seamlessly.

Stage illusionist Paul Kieve does an ingenious job of creating spectacular supernatural effects on stage, from Sam passing through a solid door to departed souls being whisked to heaven or hell.

Having Sam in a white shirt under pale blue lighting, with a slight reverb on his voice, works well to differentiate him from the living characters. Bobby Aitken’s sound effects heighten the supernatural aspect, while Hugh Vanstone’s coloured, rock concert lighting is also integral to the visual wizardry.

The book and lyrics are humdrum at times and the pop rock score by Dave Stewart of the Eurythmics and heavyweight producer Glen Ballard isn’t wildly memorable. Nor do the songs always move the action forward. However, they are catchy enough, while the best – such as Molly’s lyrical ballads With You and Nothing Stops Another Day – have lovely melodies. The Righteous Brothers’ iconic Unchained Melody from the film is used effectively as a motif through the show.

Too often, Ashley Wallen’s uninspiring choreography looks as if the ensemble members are dancers in a music video clip rather than their movement supporting and adding to the scene. However, the physical language used for Sam as he starts to negotiate the world as a ghost is cleverly done. Accompanied by swooshing sound effects that seem to slice the air, the movement creates a believable illusion of Sam passing through bodies and being unable to grip objects. Mills, David Denis as the subway poltergeist and David Roberts as Carl all handle the physicality convincingly as they are thrown around in supernatural fight scenes.

The musical really takes off with the appearance of Oda Mae Brown, the phony psychic who is astonished to discover she can hear Sam. British actor Wendy Mae Brown almost puts Whoopi Goldberg in the shade with her larger-than-life, sassy, gloriously comic characterisation. She has a rich, honey-smooth voice, nails every comic moment and raises the roof with her gospel-infused numbers.

Rob Mills and Jemma Rix have a nice rapport and work well together vocally. Rix conveys Molly’s heartache without becoming soppy and her voice is gorgeous whether she’s unleashing a powerhouse belt or touching the heart with a pop ballad.

Mills has always been hugely likeable on stage but here he matches it with a performance that delivers dramatically and emotionally. We share his frustration and his shock at Carl’s betrayal, while his grief and love for Molly feel real. His singing is also stronger than ever, and he really rocks his big number I Had a Life.

David Roberts plays Carl with just the right mix of easy charm and ruthlessness without overdoing it in a strongly acted performance. Ross Chisari is suitably thuggish as hood-for-hire Willie Lopez and David Denis exudes plenty of agro as the hip-hop subway ghost.

For all its flaws, Ghost the Musical is cleverly staged and extremely entertaining. It sweeps you up in its story-telling and while the flashy staging ramps up the wow factor, the emotional story still shines through. Clearly some remained untouched but to my surprise I was in tears at the end, and I wasn’t alone.

Ghost the Musical plays at the Theatre Royal until May 14. Bookings: www.ticketmaster.com.au 136 100

Written as a play-within-a play, author/actor/tax collector Miguel de Cervantes is imprisoned by the Spanish Inquisition. When his fellow inmates subject him to a mock trial of their own, Cervantes tells them the story of Alonso Quijana, a crazed gentleman who believes he is Don Quixote, a knight-errant on a quest to better the world.

Director Jay James-Moody and his terrific design team (set by Simon Greer, costumes by Brendan Hay, lighting by Benjamin Brockman, sound by Jessica James-Moody) set their gritty production entirely in a dark, dingy prison dungeon (as the first production was originally staged before being expanded and romanticised).

We never forget that this is Cervantes mustering the prisoners to help tell his tale, but the performances are so beautifully delineated that we experience and embrace both layers of the storytelling at the same time. The prisoners are as well characterised as the roles they then take on in Don Quixote’s world.

The lo-fi staging is simple, with a few benches rearranged for different scenes, yet it’s also beautifully detailed from the horse costumes to the kinks in Don Quixote’s sword after his tilting at windmills. The staging makes clever use of the intimate theatre, including the balcony around it, to engender an oppressive atmosphere (heightened by the sound of clanking and screams) but allies that with a rudely vigorous performance style.

Hay’s costuming is a convincing combination of the grubbily makeshift and the more colourful outfits that Cervantes might well have had in his theatre trunk, adding an element of sexiness among the squalor.

Also heightening the DIY feel is the decision to have the actors play the score on a range of instruments, led by musical director Paul Geddes on piano.

At the heart of an excellent ensemble, Tony Sheldon gives a stellar performance. He is suave as Cervantes and dignified, gentle and frail as Quixote, his rendition of The Impossible Dream speaking to us afresh and tearing at the heartstrings. It’s a revelation after umpteen bombastic versions sung out of context with little sense of the song’s true meaning.

Marika Aubrey is a spunky Aldonza, the abused barmaid and part-time tart in whom Quixote sees beauty as his honoured Lady Dulcinea. Aubrey brilliantly captures the tough, cynical carapace Aldonza has built for self-protection and then touchingly conveys the new hope she gradually, briefly allows herself to feel in Quixote’s eyes. The final scene between her and Sheldon is incredibly moving and inexpressibly sad. Aubrey is also impressive vocally and raises the roof with the song Aldonza.

Ross Chisari is endearing as Quixote’s chirpy sidekick Sancho Panza and his choreography suits the production’s aesthetic. Glenn Hill is in fine voice as the padre, as is Stephen Anderson as Alonso’s housekeeper. Joanna Weinberg lends weight to the antagonistic roles of the prison prosecutor and Dr Carrasco, who wants to marry Alonso’s niece but is worried about being associated with a madman, while James-Moody turns in a memorable comic cameo as the barber. 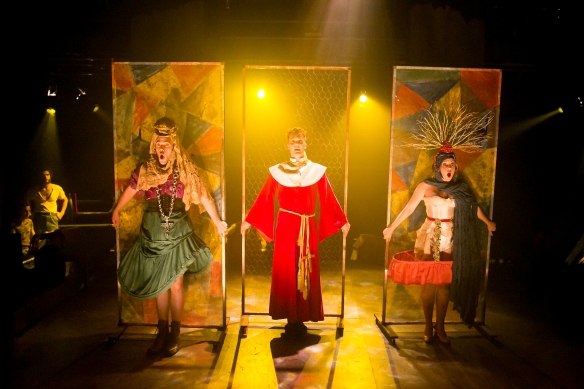 However, credit is due to all the performers: Hayden Barltrop (who is there primarily as a musician on clarinet, keys and bassoon), Reece Budin, Laurence Coy, Courtney Glass, Hay (who performs as well designing the costumes), Rob Johnson, Shondelle Pratt, Kyle Sapsford and Richard Woodhouse (whose guitar playing is gorgeous on Little Bird).

There’s no disguising Man of La Mancha’s creakiness. The book (Dale Wasserman) and lyrics (Joe Darion) are clunky at times, while Mitch Leigh’s Spanish-influenced music can feel samey and rather dirge-like. Despite all of that, Squabbalogic gives us an exciting, inspiring and genuinely moving piece of theatre. Recommended.

You can see why Tim Freedman’s songs appealed to playwright Alex Broun as the inspiration for a musical. Not only do they have beautiful melodies and pithy lyrics that ring emotionally true but a strong sense of narrative and character, written as they were about real people, places and incidents.

Broun co-wrote his new musical Truth, Beauty and a Picture of You with Freedman (frontman of Sydney rock band The Whitlams) and uses 19 Whitlams classic including “No Aphrodisiac”, “Blow Up the Pokies”, “Keep the Light On”, “Beauty in Me” and the “Charlie” series.

Set in Newtown’s grungy pub scene, 20-year old Tom (Ross Chisari) arrives from Taree with a letter from his Mum, in search of Anton (Ian Stenlake) and Charlie (Scott Irwin), former members of a band in which his dead father Stewie (Toby Francis in flashback scenes) once played.

“Famous on three blocks” in Sydney’s inner west in their heyday, Anton and Charlie are now wrestling with demons and rapidly going to seed. Tom meets a girl called Beatrice (Erica Lovell) who is also searching for herself, having fled Mosman. The encounter between the four leads, predictably enough, to revelations from the past and the possibility of healing.

Produced and directed by Neil Gooding for Hayes Theatre Co, there’s much to enjoy about the production. It’s well staged and performed, the band led by musical director Andrew Worboys is terrific and the songs are great, but Broun’s script is not strong enough for the show to really take off.

Broun draws on Freedman’s themes of male friendship, lost love, disappointment and emotional damage but the characters and plot aren’t developed enough at this point for the climax to convince.

The writing is often perfunctory and never quite rises above the feeling that scenes are contrived to fit the musical numbers. The meeting between Tom and Beatrice, in particular, is clichéd and glib. In fact, the entire story of Tom and Beatrice is far less interesting than the story of the band yet it’s fore-grounded. The scenes about the band – which are the best written and performed – are the ones where we feel ourselves being suddenly drawn in and wanting to know more.

Staged as if in a grotty inner-city pub, Jackson Browne’s set design (lit by Richard Neville) provides just the right vibe. There’s a band set-up on a high stage, backed by all kinds of signs. The stage moves backwards to create room in front of it for various other scenes with simple props sliding out from underneath. It’s a clever solution in the tiny venue.

The actors work hard to bring the show to life. Stenlake as the shambolic, hard-drinking Anton, now letting it all hang out, and Irwin as the pokies-addicted Charlie are particularly impressive, both acting-wise and vocally, the scenes between them some of the most moving.

In the short time that it has been operating, the Hayes has already proved itself an invaluable addition to Sydney’s musical theatre scene and it’s great to see them providing a launch pad for new local musicals like this. Truth, Beauty and a Picture of You still needs work but it’s well worth a look. There’s already much to enjoy about it and there’s plenty of potential for it to be honed into something even better.

Truth, Beauty and a Picture of You plays at the Hayes Theatre Co until June 1. Bookings: hayestheatre.com.au